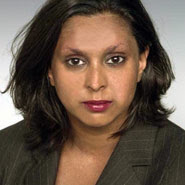 Image - Nasreen Suleaman, did not go the cops after she knew the identity of terrorists and who was so desperate to counteract Islamphobia that she paid convicted racists to lie on TV to disarm the indigenous British people from defending themselves from Islamist terrorists by calling anyone who dared talk about Islamist violence as 'islamaphobic'.

Yes, Nasreen - we should 'Panic If they Are Islamists'.

The BBC funded the trainer of the 21/7 bombers and one of the BBC own employees did not go to the police with information on people she knew were connected to the 21/7 bombers.

So thats here our license fee goes, into the pockets of those that assist those that explode bombs on our streets and is used to fund para-military training in the woods by Islamist terrorists.

Note the name of the BBC employee who dd not give the information to the police, one
Nasreen Suleaman.

Note also that the BBC producer Suleaman knew the money she gave the terrorist trainer would be used to pay a fine for the Islamist, Mohammed Hamid, which was A MERE £300 POUNDS for racially abusing two policemen.

Note the comments below of Suleaman - "Ms Suleaman told the court that Mr Hamid was keen to appear in the programme. She said: “He was so up for it. We took the decision that paintballing would be a fun way of introducing him.

“There are many, many British Muslims that I know who for the past 15 or 20 years have been going paintballing. It’s a harmless enough activity. I don’t think there is any suggestion, or ever has been, that it’s a terrorist training activity.”

YEAH RIGHT - seeing as that the film the BBC took has the bunch of terrorists running around screaming Islamists slogans as they roll around the woods firing at each other, it is pretty fucking obvious that they were in training for terror attacks and that many other terrorists in the UK have been involved in paintballing as training as terrorism.

A BBC producer failed to give police information that would have helped track down the July 21 bombers, the trial was told.

Don't Panic, I'm Islamic, which featured the group paintballing and an interview with Mohammed Hamid, was shown on BBC2 on June 12, 2005.

Nasreen Suleaman, the producer, told the court that Hamid said he would use his £300 fee to settle the fine he had been given by magistrates for racially abusing two policemen at his Oxford Street stall.

Called as a defence witness, Miss Suleaman admitted that she had spoken to Hamid in the days following the July 21 attacks and found out he knew the wanted men.

She said she thought he was scared the fugitives might try to call him but did not contact the police because she felt under "no obligation" to do so.

Miss Suleaman claimed she told BBC managers of the situation but no one passed on the information to the authorities.

She looked visibly shaken when told that two of the July 21 bombers, had joined Hamid on another paintball trip two weeks before the bombings.

Miss Suleaman saw Hamid a few days after July 21, 2005 and he seemed "very shocked that the men he knew were accused of this".

Duncan Penny, prosecuting, said: "Did you tell him to go to the police?"

Ms Suleaman replied: "I don't think I needed to."

The BBC funded a paintballing trip for men later accused of Islamic terrorism and failed to pass on information about the 21/7 bombers to police, a court was told yesterday.

Mohammed Hamid, who is charged with overseeing a two-year radicalisation programme to prepare London-based Muslim youths for jihad, was described as a “cockney comic” by a BBC producer.

The BBC paid for Mr Hamid and fellow defendants Muhammad al-Figari and Mousa Brown to go on a paintballing trip at the Delta Force centre in Tonbridge, Kent, in February 2005. The men, accused of terrorism training, were filmed for a BBC programme called Don’t Panic, I’m Islamic, screened in June 2005.

The BBC paid Mr Hamid, an Islamic preacher who denies recruiting and grooming the men behind the failed July 2005 attack, a £300 fee to take part in the programme, Woolwich Crown Court was told.

It was alleged that Mr Hamid told a BBC reporter that he would use the corporation’s money to pay a fine imposed by magistrates for a public order offence.

Ms Suleaman told the court that Mr Hamid was keen to appear in the programme. She said: “He was so up for it. We took the decision that paintballing would be a fun way of introducing him.

“There are many, many British Muslims that I know who for the past 15 or 20 years have been going paintballing. It’s a harmless enough activity. I don’t think there is any suggestion, or ever has been, that it’s a terrorist training activity.”

The court was told previously that Mr Hamid taunted police on his return from an alleged terror training camp in the New Forest where exercises included somersaults, pole-vaulting and paintballing.

Ms Suleaman said she was not aware that Ramzi Mohammed and Hussein Osman, two of the July bombers, had joined Mr Hamid at the Tonbridge paintball centre on July 3, 2005.

Ms Suleaman said that Mr Hamid was agitated after the July attack. She said: “I think he was worried that perhaps the men might call him because they were on the run at the time. I think he was very, very shocked about the fact that the men he knew were accused of this.”

Duncan Penny, for the prosecution, asked Ms Suleaman if she had told Mr Hamid to go to the police or contacted the police herself. Mr Penny asked: “Here was a man who told you that he knew those individuals who, as I understand it, were still at large for what on the face of it was the attempted bombings of the transport network a fortnight after it happened, and he was telling you he had some knowledge of them? There was a worldwide manhunt going on, wasn’t there?”

She replied: “I got the sense that he was already talking to the police. I referred it to my immediate boss at the BBC. I wasn’t told that there was an obligation. In fact it was referred above her as well. It was such a big story.” She added: “I don’t think it’s my obligation to tell another adult that he should go to the police.”

Mr Hamid had told her he had not spoken to Muktar Said Ibrahim, the ringleader of the 21/7 plot, since October 2004 and there was no suggestion that Mr Hamid knew anything about the attempted attack.

Phil Rees, who produced the show, told the court that he was impressed by Mr Hamid’s sense of humour while looking for someone to appear in the documentary. He said: “I think he had a comic touch and he represented a strand within British Muslims. I took it as more like a rather Steptoe and Son figure rather than seriously persuasive. I saw him as a kind of Cockney comic.” Mr Rees, who now works for the Arabic TV station al-Jazeera, gave Mr Hamid a signed copy of his book Dining With Terrorists.

Mr Hamid denies providing weapons training, five charges of soliciting murder and three of providing training for terrorism. The other men deny a series of charges related to training.
Posted by Defender of Liberty at 01:03