The Beauty of Blue Eyes 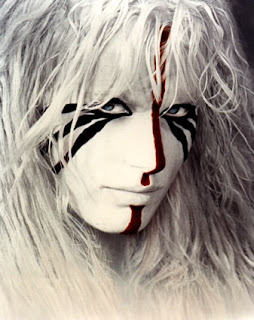 An interesting article in the Daily Mail ;

According to a team of researchers from Copenhagen University, a single mutation which arose as recently as 6-10,000 years ago was responsible for all the blue-eyed people alive on Earth today.

The team, whose research is published in the journal Human Genetics, identified a single mutation in a gene called OCA2, which arose by chance somewhere around the northwest coasts of the Black Sea in one single individual, about 8,000 years ago.

The gene does not "make" blue in the iris; rather, it turns off the mechanism which produces brown melanin pigment. "Originally, we all had brown eyes," says Dr Hans Eiberg, who led the team.

And most people still do. The finding that a rare mutation, probably dispersed in the rapid wave of colonisation that followed the end of the last ice age, highlights one of the great mysteries of human evolution: the oddness of Europeans.

Those from Europe and the Near-East have many characteristics that set them apart from the rest of the human race.

Not only are Europeans far more likely to have blue eyes (95 per cent in some Scandinavian countries), they also have a far greater range of skin tones and hair colour than any other ethnic grouping.

It is only in Europe that you will find large numbers of blondes and redheads, brunettes, pale skins and olive skins, blueeyed and green-eyed people living together in the same communities. Across the rest of the world people are almost uniformly darkhaired and dark-eyed.

Why this should be remains unknown, and in particular how such mutations can have arisen so quickly since Europe was colonised by Africans just a few tens of thousands of years ago.

One theory is that Europe's cold weather and dark skies played a part. Fair skin is better at making Vitamin D from the 8 per cent of the world's population have blue eyes weak sunlight found in northern latitudes.

Another suggestion is that the strange skin, eye and hair colours seen in Europe are down to ancient interbreeding with the Neanderthals, who died out about 25,000 years ago.

Maybe the Neanderthals were blonde or red-haired and it is their genes which we have inherited. The trouble with this theory is that there is no evidence, from the scraps of Neanderthal DNA that have been recovered from bones, that there was any substantial interbreeding between them and Homo sapiens at all.

Perhaps the most plausible theory is that blonde hair and blue eyes arose because of a mechanism called sex selection.

This is where males and females choose as their mates those who have one unusual physical characteristic, not necessarily associated with "fitness" per se but simply something unusual. "


The fact that the gene for blue eyes only appeared about 6-10,000 years ago is astonishing. In order for the blue eye gene to be so prevalent in the European gene pool is proof that the lineage of the European people goes back far further than expected.

In order for the blue eye gene to be so prevalent, a single specific genetic adaption, that is at least 10,000 years old means that when we add in the entire range of specific and unique environmental genetic adaptions, racially distinctive adaptions within the European racial group, then we can see that my thesis that the European racial group is derived from the Cro-Magnon Group is strengthened.

The prevelance of the blue eye genes amongst the European racial group as well as the other racial differences developed by indigenous Europeans, suggests that the current dating of the Mitochondrial Eve is wrong. In order for the 'Eve Genes' to be present in all humanity with all its acquired and inherited racial differences suggests that the common origin theory as regards Mitochnodrial DNA has to be revised back in time a lot further than a 100,000 years ago. It strengthens the Multi-Regional theory.

But Human Evolution has still not stopped.

" In the past 5,000 years, genetic change has occurred at a rate roughly 100 times higher than any other period, say scientists in the US.

Professor Henry Harpending, an author of the study from the University of Utah, Salt Lake City, US, said: "The dogma has been these [differences] are cultural fluctuations, but almost any temperament trait you look at is under strong genetic influences.

"Genes are evolving fast in Europe, Asia and Africa, but almost all of these are unique to their continent of origin," he added. "We are getting less alike, not merging into a single, mixed humanity."

This is happening, he said, because "there has not been much flow" between different regions since modern humans left Africa to colonise the rest of the world. And there is no evidence that it is slowing down, he added.

"The technology can't detect anything beyond about 2,000 years ago, but we see no sign of [human evolution] slowing down. So I would suspect it is continuing," he told BBC News. "


With the rate of Human evolution increasing rapidly in Europe, which is the evolutionary transition into speciation, we can see that dynamic for the racial differentiation of the European racial group into becoming speciation is a powerful factor both in history and the world today.

The Multi-Cultural society and Liberal Consensus are both products of the Oil Age, and as soon as the cheap energy oil ends and the Eco-Conflicts begin, then the reality of the Natural Order will overturn the old order.

All multi-cultural socieities in human history have failed under every model of political, social and economic organisation ;


To seek to suffocate an internal human dynamic and criminalise its every expression, is an act of utter folly. To ignore the power of the dynamic of racial differentiation and its effect in the world today is to ignore a genetic dynamic that is hardwired into all humans.

The triumph of rationalism exists only when Men are forced not to compete for ever smaller resources, then the instinctive in Man awakens and he becomes what he truly is.

The Mask drops and the real being is revealed, even to the Self.

We know not who we are nor what we are until we are tested.

It is the testing that unlocks the secret of the true Self.

The dynamic of differentiation is a sacred thing, a gift fought hard for by our ancestors and won only through famines and floods, harsh winters, long forgotten wars and constant struggle.

It is our drive to survive as a race engaged in the evolutionary struggles of a New Becoming.

It is the sacred rite of our very being.
Posted by Defender of Liberty at 13:33

Fucking hell Lee, one minute you are a great political thinker, next minute a poet and now a geneticist and a physical anthropological expert.

FFS I clearly wasted my time (and a fucking pot of money) learning biochemistry and genetics at university (Bristol, if you are asking) when a cunt brain like you can broadcast your shit across the internet. If I knew where you lived I'd get the local health board to section a cunt like you.

Fuck off and get a proper job you arse brained racist piece of shit.

It appears that the ongoing Lithium crisis is now impacting on wider society.

What the hell is a university educated bio-chemist doing coming to visit this site in the first place !

I find it quite strange that a trained geneticist would visit this site and this indicates either my theory is correct (unlikely) or that you are not in fact a bio-chemist (highly likely) and that you are in fact a demented left wing idiot knobhead.

In the event you are a bio-chemist (highly unlikely) get on and do some work and save some lives or something.

Me thinks you should one day publish your blogg as a collected works.

is really funny, I was looking for 'human traits "idiocy" 21 century' and this article showed up. you are a real moron, a good example of idiocy.