One Nation, One Culture, One Law 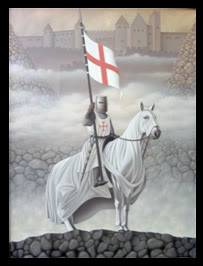 The announcement from the Archbishop of Bolshevism, Rowan Williams the Archbishop of Canterbury, that he wants to see Sharia Law in the UK is the whimper of a weakling about to surrender our country to the forces of radical Islamism.

Their is only law in this land, OUR LAW.

If people do not like that then take the first boat back to where you came from.

Williams is just another Marxist in a dress, a simpering and gutless liberal that seeks to use the Church of England as another weapon in the Gramscian Long War against Britain and our culture.

Allowing Sharia courts to hear divorces etc is the thin edge of the wedge, as already this week the government have decided to give welfare benefits to bigamists and as soon as a formal Sharia law structure is constructed in the country - then they will demand ever more powers to deal with their own community.

In many ways this is a good thing as it will reinforce the fact that the Sharia Law supporters are aliens and that they are not here to integrate with us or to respect our country and way of life.

They are here simply as colonists and colonisers and it is about time the British sheeple woke up to that fact.

Anything that increases the polarisation of British society against the Sharia supporters is useful, but the fact is that only the BNP will ever be prepared to act against them.

The rest of the Establishment parties will not ever deal with their increasingly violent separatism that is supported and abetted by the Jihadist suicide bombers that attack the UK on a regular basis.

The terrorists attack us and in response the damned liberals, leftists, Labour government and reactionary conservatives demand that WE surrender ever more of our rights and liberties to appease the terrorist scum and their Sharia law advocating fellow travellers.

Instead of surrendering OUR rights when we are the victims of their terrorism, we should instead be removing theirs.

The more the terrorists attack us and the more the Sharia law supporters demand rights to create a new legal system in our country - then the more deportations of those people must increase.

The time has come for the maximum harshness against all those that threaten our national security and who are demanding their own legal systems in our country.

All such organisations demanding or supporting Sharia Law must be banned.

All organisations such as the Muslim Parliament that encourage separatism and that seek to create alternative legal and political structures in our society must be banned.

The Burkha must be banned.

The terrorists executed and their families deported. If they are suicide bombers then their bodies must be put into pig skins and burnt.

All charities that support and fund Sharia law groups and separatist groups banned.

Every mosque with links to violence, sharia law or terrorism closed down.

All imams that encourage or support violence jailed then deported.

Those that will not integrate into OUR society and who seek to colonise our country must be deported.

Those who seek to usurp and undermine our culture and law in our country must be deported or, in the case of the homegrown surrender monkeys like the Archbishop of Canterbury, removed from their positions.

That also includes all those reactionary arseholes in the Labour, Lib Dem and Tory Party that are screeching about the danger of Sharia Law, but who are busy selling us out to the EU, US, WTO and UN and imposing the EU legal system and laws on us by stealth.


One Nation, One Culture, One Law.


No Comprimise - No Surrender.
Posted by Defender of Liberty at 02:50

Here's a shorter version: Why don't we just ban Islam?

As for the traitor Williams, may I ask a couple of questions? I'd really like to hear your take on:

1. When I heard this my first reaction was "Common Purpose". Do you think CP has infiltrated the church?

2. What do you think of this marxist "charity" subsidised by taxpayers that is effectively a fifth column in our own society? Do you regard it as a bigger threat than Islam and globalisation?

3. Do the BNP have a strategy to halt CP and prosecute its members?

An upside to this is that the BNP can milk this for all it is worth, I'm sure this will help recruit more members and voters.

Banning Islam is not the answer, as it is not patriotic Muslims that regard themselves as British first respect British culture and keep their religion to themselves are not the problem. It is the fanatical muslims, white leftists, reactionary conservatives and the liberals who are as much the problem as the Islamists.

The Church is today just another infiltration subverted by the Left, it is not a patriotic organisation but a front group for the liberal / left or the reactionary anti-Natoinalist immigrants that have took charge of them.

Common Purpouse should be banned as it is a subversive organisation dedicated to the destruction of British sovereignity.

All such organisations and groups that have more loyalty to the Global Caliphate, the Vatican, Israel, the US, the EU, UN etc etc than to Britain should be banned.

Agree with the others.

Thank for the reply Lee.

The problem with not banning Islam on the grounds you suggest regards progeny. Some of the current generation maybe loyal to Britain but the next generation may well not be. Islam is a violent ideology and muslims follow the example of Mohammed. This means violations of human rights and I believe Islam should be banned on those grounds alone. Not to mention that practising muslims must obey sharia law.

Totally agree with what you say about organisations who have no loyalty to Britain.

Only the BNP will do what's necessary.