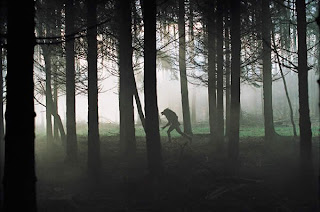 I am preparing to do a review of the book 'The Pagan Resurrection' by Richard Rudgley and came upon the review of The Werewolf Complex, a theory on violence in Western Civilisation, by the French sociologist Denis Duclos.

He blames the male violence in White societies, both criminal and cultural such as depicted in the movies, as reflections of the cultural tradition and reverence for the Berserker warriors of ancient Germanic societies. He says that the cultural traditions of Odin, the Battle Lord and Storm Lord, which is the dark side of the European unconscious, are responsible for modern social violence. He asserts that this myth which has been transmitted through our societies as a 'rogue meme' infects new generations anew with its frenzy and therefore that those ideas and cultures must be censored and destroyed.

Duclos rejects the Odin Archetype Theory of Jung ( and hence seeks to disconnect the people, the land and their ancestral cultures ) and also seeks to erase any blame as regards Christianity, the dominant religion and cultural tradition in Western Societies for over a thousand years, for any part in this process of causing social violence through individual repression and the perpetuation of memes that encourage and are associated with violence.

Whilst Christianity has seen its own traditions of violence from the Warrior Knight Tradition, the Crusades, The Inquisition, Two World Wars and also spawned Fascism, Communism and Consumerism - the Germanic heritage of Europe and the religious and cultural traditions of the North have been extirpated and totally destroyed.

Anglo-Saxon language, Runes, Odinist theology, sacred places, cultural traditions and all forms of ancestral heritage of our pre-Christian past have been almost wiped away.

The idea that the basis of violence is such a fragile Norse meme is absurd, and ignores the reality of the violence inherent in the Judeo-Christian traditions of Judaism, Christianity and Islam. Each of them have violence hard wired into the very substance of their theological beings. Genocide in the Old Testament, murders in the New, Jihad in Islam - each of them have violence inherent in their theology. To deny the theological and actual historical violence of the Semitic religions as a factor in the violence of Western Society is simply logically unsustainable, especially when Christianity dominates the culture of the West.


TO BLAME SOME LINGERING CULTURAL MEMORY OF ODIN FOR VIOLENCE, IS LIKE BLAMING THE KNIGHT TEMPLARS FOR ISLAMIST VIOLENCE TODAY.

From Duclos we can see some good points ;

3)That the ancestral culture of a people dictates its way of life, and also its way back to balance

I, along with Rudgeley, assert that it is the centuries long brutal surpression of our ancestral cultures that have been repressed by Christianity and liberalism, that have caused the organic and spiritual crisis in Western Man and that it today springs forth as violence.

Duclos says that the sociopaths and psychopaths are like werewolves, in that they have a light side and a dark side, but that the dark side of their unconscious dominates them.

Duclos asserts that it is a continuation of the pagan tradition of the Berserker is behind this societal violence.

This is pure nonsense.

Nearly a thousand years of the Judeo-Christian extirpation of the indigenous pagan religious traditions of Europe, and the attempt to impose an alien religion with its alien archetypes, has created the spiritual, social and cultural crisis in Western Man.

Western Man suffers because he has lost contact with his own true organic nature and ancestral traditions.

The Inner Plane of the archetypes is the sacred land of the Higher Self, it is the pantheon of our Soul.

We need to re-discover our ancestral gods and to re-connect the organic Life Streams of our people.

Western Man can only be saved by a return to Western Spirituality and culture.

What is a werewolf but a man who dares to bare his fangs to the world, instead of using them to tear himself apart.
Posted by Defender of Liberty at 04:03