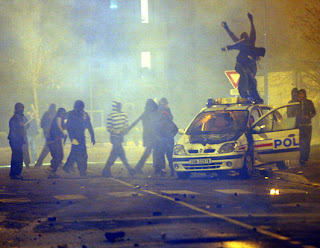 Do you remember the French Riots that occur on a regular basis but that are described by the media as simply the products of 'youths' (and not organised pogroms by Islamist youth and criminal gangs to drive the police out of Muslim areas and create Sharia Zones under the control of the Jihadists in our cities).

According to the media these riot were spontaneous and unorganised outbreaks of rage by poor, unemployed and racially oppressed youths.

Today the French police undertook raids against the 'ringleaders' of the riots.

The fact that the French police are targeting 'ringleaders' suggests that the British media were talking a load of old bollocks about the riots and who the rioters were. Ringleaders suggest organisation and purpose.

Secondly I would suggest that French citizens park their cars indoors and prepare for the wave of riots that will begin again tonight.

The riots in Denmark, France, Oldham, Bradford and all across Europe over recent years were Islamist probing attacks to see how the police operate during riots, to test how weak the resolve of our politicans are to smash the riots and rioters to a bloody pulp, and to train cadres of Jihadists for future attacks against our nation states.

If the Oldham riots ever happened again in this country and the BNP government were running the country I would suggest the following response ;

1) Deploy the army if the police cannot contain the violence

2) Autorise the police to use use tear gas and rubber bullets to get the rioters off the streets, and if that failed authorise deadly force to be used by the Army against the rioters in the event of danger to civilian, police or army lives.

3) Rescind the citizenship status and deport all those arrested in the riots or imprison them and use them for forced labour on our planned national Green Energy Infrastructure building projects.
Posted by Defender of Liberty at 01:56

4) Outlaw Islam.It is arab imperialism, it advocates violence and murder in pursuit of the ummeh and its laws violate human rights.

No civilised society should tolerate the evil of Islam.