The Definition of an Idiot 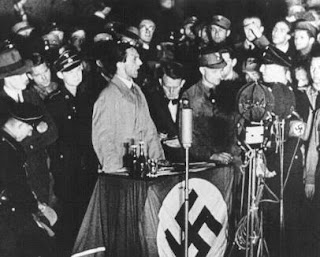 The article about Donna Bailey in the Daily Mail ;

This article by Jenny Johnston has achieved a new height in British Journalism and she has set the benchmark for future generations of British journalists.

' Doing a Johnston ' in the future will be known by all journalists, but few outside their clan. Doing a Johnston will be a secret mantra they shall repeat only amongst their fellow initiates in shadowed corners of their offices wherever a water dispenser and crisp machine resides. They shall gather in conspiratorial huddles, their voices low and deep, and mutter amongst themselves like the persecuted priests of ancient some heretical sect deep in the catacombs of their concrete cages, of the secret of the Johnston.

This is the secret of which they shall speak ;

What sort of journalist is surprised to discover that their own propaganda and lies, are in fact not true ?

A Johnston thats who.

The second rule is DO NOT BELIEVE YOUR OWN PROPAGANDA.

The article by Jenny Johnston is simply a tedious confession of her shock at finding out the BNP were not the monstrous caricatures she believed them to be. This shock to Johnston, along with her astonishing discovery that members of the BNP actually have public support, created this article of such journalistic importance.

Johnston in fact only 'understands' and conceptualises the BNP within the propaganda matrix in which she is a web spinner herself. She only knows the BNP through the lies and propaganda of the media.

That is like looking at the world whilst wearing the wrong type of lens fitted in your glasses, what was distant is then also distorted. In atomised mass consumer societies the individuals perception both of themselves, their role in society and also the nature of their society itself is created and altered through media propaganda.

Johnston has had no direct physical contact with the BNP, therefore her assumptions are prediacted on her ignorance of the objective reality of the BNP.

It is her ignorance that she is astonished at, though she has yet to understand that fact due to her complete submission to the delusions of Ulro and Generation ( as William Blake would have described their inability to distinguish between reality and illusion, the complete triumph of Urizen in its guise as Materialism through the mechanism of the media as a way to enslave and control mens minds ).

The media must not be allowed to usurp the democratic electoral system through interfering in the political process, for allowing them to do so threatens our entire Constitutional Nationalist system.

The interests of the Corporatocracy must never be allowed to threaten or usurp democracy.

The fact that journalists are shocked when they discover their own bullshit about the BNP is untrue, that all the members of the party are not the knuckle draggers they like to portray us as, is proof that they are sick with their own poison.

When even the journalists fall victim to their own propaganda, then this shows that the very nature of journalism needs to change.

The basis of journalism is TRUTH, not propaganda. Any journalist that seeks to subvert truth for lies is either a hack or a crook. Personal integrity and basic journalistic pride in ones work should ensure that journalists at least interview their subjects before ravaging their reputations. If the role of the media in our so called 'democratic 'system is to interfere in elections and subvert democratic support for individual political parties, then that is a declaration of war against the democractic system.

Such an abuse of power demands a response.

If the rabid dogs of the Media continue to maul our democracy, then they must be neutered.

The role of the media in a democratic system is to ;

2) Print the news based only on the reporting of truth and fact.

5) To hold the government, politicians, civil servants, state officials and political parties to public account for their actions that can be seen in direct conflict with their public roles eg a politician paid by the state that uses public money to hire members of his family to do work for him.


The role of the media is not to campaign for political parties, individual politicians or to print government propaganda for wars.

The idea that the BNP can be described in simplistic terms such as 'brutes' or 'repulsive' and 'alienated from majority support' is simplistic nonsense, and makes the mistake of conflating correlation and causation. Just because some media hacks say 'the BNP are rejected by most people', does not make that true.

The idea that the beliefs and values of a liberal sect of media multi-culturalists reflects reality, is itself an example of the delusion of the media.

The media reflects itself.

We do not need a cabal of little media baron Goebbels to control us, a rank of secretive plutocrats in a tiny media oligarchy who seek to influence and control our country and society for their own needs and interests, and the for the profit and empowerment of their political puppets.

That is not a democracy, that is a fascist dictatorship.

The role of the press is to serve only truth, not profit.

Today the fascists are the Media.
Posted by Defender of Liberty at 10:59

From article:
"That is not a democracy, that is a fascist dictatorship."

And the word fascist, like the words racist and nazi, are simply racial slurs given selectively to white Gentiles.

A bad white Gentile, one that discriminates in his own ethnic interests, is a Nazi/fascist/racist/supremacist.

One of your better articles of late. Leave VoC alone and concentrate on the real war.