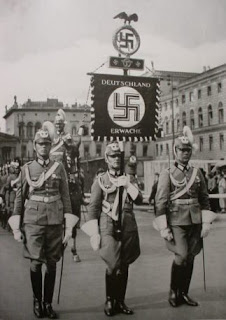 The news that the police want a national DNA database is not surprising. The police in recent years have been seen to be nothing more than the para-military wing of the Labour party - their own SD or Bolsheviks in blue uniforms.

With their gutless subservience to Political Corrctness, anti-white racism and arse licking of the ethnic lobby groups the police are now just a joke.

The criminals realise that the role of the Police in todays Britain is to PROTECT THE CRIMINALS FROM THE VICTIMS, not the victims from the criminals.

Even the criminals laugh at the police.

This betrayal of the Police has primarily been by the overpaid senior officer ponces in the police who have arse licked the Labour government for their massive pensions, PC promotions and shiny little medals when they leave the police.

That doesnt excuse those little brown nosing bastards on the street who kiss the arse of the ethnic criminals and adopt the fascist PC stance with nationalists.

The fact that senior cops want a DNA database is indicative that these senior officers are idiots.

The fact is that the majority of indigenous criminals in the UK are already on the DNA database.

Even the scumbag who killed Sally Anne Bowman was on the DNA database or should have been, seeing as he had a twenty year record of sex attacks.

The police seem to be taking the DNA of anyone who crosses their path of late - and at the same time as they busy acting as social workers in uniform for every criminal in the country.

The police act the fascist with innocent citizens and act as nannies with criminals.

All the government needs to do is pass legislation stating that all those convicted of serious criminal offences in the past must give a DNA sample to the national DNA database.

Target THE CRIMINALS and not the innocent public.

The ONLY people that arent on the DNA database are mainly foreign criminals.

The fact that the fastest rising source of crime in the UK is from foreign criminals means the DNA database of BRITISH criminals and citizens would be about as effective in crime fighting as using a crystal ball to discover the identity of criminals.

The fact that the Police want to store the DNA of EVERY person in the UK from the moment they are born is something that the Gestapo or NKVD or KGB would have loved to done.

You can just imagine some uniformed copper standing beside the bed in the delivery ward with a DNA swab ready to plunge in the mouth of the new born babe.

Welcome to the world - now get on the DNA datbase.

Idiots.
Posted by Defender of Liberty at 02:17

These 'high profile' murder cases are being used in the same way that the Hungerford and Dunblane crimes were used, to criminalise ordinary individuals.

I used to visit two police blogs. I don't anymore. But you would see from these blogs that serving officers, i.e. rank and file, frequently refer pejoratively to ordinary individuals as 'MOPS,' 'Members of the Public.'

What is worse, some evidence exists to show that elements in the police now refer to ordinary individuals as 'civilians.'

I suspect that increasing numbers in the various forces are looking forward to the day when this country is totally subsumed by the EU, so they can become a real Gestapo with unbridled power (which won't affect current Muslim and BME 'human rights' of course).

I came to this conclusion when a link I posted on one police site to an EUTruth article about the coming EU police state was quickly removed by the blog administrator - a most unusual occurrence for that blog.

Although I had previously upset the blog owner by:

a) revealing I was a BNP member
b) indicating I followed biblical Christian belief.

It appears that either of those disclosures is enough to brand you as the Devil incarnate with some of these specimens of Britain's finest.

Disclosing both certainly does.

Lee John Barnes wrote ... The fact that the fastest rising source of crime in the UK is from foreign criminals ... In Ireland ... Irish Prison Service Report show that the number of non-Irish prisoners incarcerated is a staggering 30 per cent of the entire prison population. ... The Irish seem to have gone further in ten years than England in sixty, despite many of them having had first hand experience of the consequences for England.

Astute points which I have not encountered elsewhere. I would hazard a guess that the true motivation for the database is Egalitarianism because of the hugely disproportionate number of blacks on it, with the relative absence of Hindus and Sikhs being conveniently ignored.

Indeed, in 2006 Prof Sir Bob Hepple, QC ... is leading an inquiry by the Nuffield Council on Bioethics into the DNA database, said the figures would add to concerns about discrimination. The inquiry is considering whether it would be fairer to hold the DNA of everyone, not just crime suspects. ...