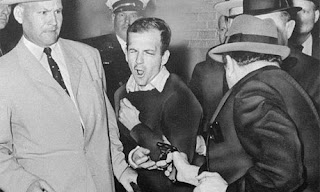 An interesting story on the Keneddy assassination in The Guardian.


The report of the Warren Commission of the JFK case had more holes in it than the New Labour Dodgy Dossier.

As far as I can ascertain it appears that Oswald was probably a patsy who was set up by his fellow plotters, the mafia and FBI.

The question is was Oswald an undercover US military intelligence officer (which his record suggests he was) working undercover for the FBI who was then set up by the FBI and Mafia to take the blame for the attack.

It appears that Oswald was sent by the FBI as a patsy to die and be blamed for the attack.

Seeing as J. Edgar Hoover of the FBI was being blackmailed by the mafia with pictures of him and his gay lover, then it appears that Hoover must have also sanctioned the attack.

A transcript claiming to detail Lee Harvey Oswald's plot to assassinate President John F Kennedy has been discovered in an old courtroom safe.

The record – described as reading like a conspiracy theorist's dream - appears to minute talks between Oswald and Jack Ruby, who killed Oswald after Kennedy's assassination.

But the apparent record of the conversation between Oswald and Ruby was probably fake, said the district attorney, Craig Watkins, and was instead likely to be long-forgotten material for a proposed film.

Oswald says in the transcript: "I can still do it, all I need is my rifle and a tall building; but it will take time, maybe six months to find the right place; but I'll have to have some money to live on while I do the planning."

The Dallas Morning News reported the transcript and other material were found in a safe on the 10th floor of the county courthouse.

The memorabilia – the rest of which was believed to be genuine – also included letters from Wade to Ruby, a gun holster and clothing that probably belonged to Ruby and Oswald, Watkins said.

The transcript suggests Ruby and Oswald met at Ruby's nightclub on October 4 1963, less than two months before the assassination on November 22 that year.

In it, they talked of killing the president because the mafia wanted to "get rid" of his brother, the then attorney general, Robert Kennedy.

Today, Gary Mack, the curator of the Sixth Floor Museum, which chronicles Kennedy's life, said he doubted the transcript was genuine.

He added it was well documented Oswald was in Irving, Texas, on the evening of October 4, and therefore could not have been in Ruby's nightclub.

"The fact that it's sitting in Henry Wade's file, and he didn't do anything, indicates he thought it wasn't worth anything," Mack said. "He probably kept it because it was funny. It's hilarious. It's like a bad B movie."

Terri Moore, an assistant to Watkins, today said she believed the transcript was part of a movie Wade was working on with producers.

The former prosecutor had discussed making the film, Countdown in Dallas, in letters found in the safe. "It's not real. Crooks don't talk like that," Moore said.

Watkins said the items were still being processed and would eventually be made available to the public.


The purported Oswald-Ruby conversation took place on Oct. 4, 1963, at Ruby's Carousel Club on Commerce Street. It reads like every conspiracy theorist's dream of a smoking gun that ties the men to a plot to kill Kennedy.

Part of the two-page transcript reads:


Lee: You said the boys in Chicago want to get rid of the Attorney General.

Ruby: Yes, but it can't be done ... it would get the Feds into everything.

Lee: There is a way to get rid of him without killing him.

Lee: I can shoot his brother.

Ruby: But that wouldn't be patriotic.

Ruby: It would get the FBI into it.

Lee: I can still do it, all I need is my rifle and a tall building; but it will take time, maybe six months to find the right place; but I'll have to have some money to live on while I do the planning."

Later, Ruby warns Oswald that the mafia will ask Ruby to kill him if he's caught.

The district attorney's office discovered about a dozen boxes of materials in a courthouse safe that included items and documents from the Jack Ruby trial. Ruby was convicted of killing Lee Harvey Oswald, but the verdict was overturned. He died before a second trial occurred.

Many of the records, including interrogations with Ruby, his family and witnesses, are undated, and it's unclear which agency or people conducted the interviews. Other documents are signed and dated. A sampling of what was found:


• Transcripts of interviews with prospective jurors.

• Notes to District Attorney Henry Wade about prospective jurors from people, possibly in the DA's office, who knew them. One note mentioned that someone was Catholic. Others said a person had mental problems or was likely not to consider harsh punishment.

• Letters that show Mr. Wade was working on a movie deal for a documentary-type film to be titled Countdown in Dallas.

• A typed, undated, unsigned memo from the DA's office with Mr. Wade's name on the letterhead that says Ruby said he planned to kill Oswald because he did not want President Kennedy's widow to have to testify at his trial. Mr. Ruby also said, according to the memo, that there were no conspirators in his plan. The memo says in an interview that appears to have taken place after the trial that Ruby "said there was absolutely no blackout, that he had premeditation with the intent to kill Oswald if he was there."

• Typed notes from an interview with Ruby before the trial where Ruby said he did not recall anything after walking down the ramp into the area where he shot Oswald.

• The files also contain hundreds of pages of copied letters and cards sent to Ruby before and during his trial. Some letters and cards sympathize with Ruby. At least two women – one from Philadelphia and another from Plainfield, Ind. – sent Ruby checks for $2. Others sent Valentine's Day cards, and at least one sent a St. Patrick's Day card.

• Other letters lash out at Ruby. One handwritten, unsigned note apparently sent to him says: "You expect a fair trial. So did Mr. Oswald. It would not be a happy situation if the assassin of the assassin were himself assassinated." Others are addressed "Dear Killer" and called Ruby a "Commie Jew." One man typed a letter using red ink because he said the black ribbon was out.
Posted by Defender of Liberty at 04:41