The South Will Rise Again 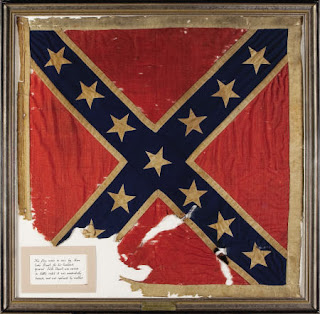 The US recognition of Kosovo sets an interesting precedent.

The US recognised Kosovo as a way to punish Serbia for alleged (and untrue) ethnic cleaning, the invasion of Kosovo and murders of Kosovan civilians.

If this is correct then the independence of Kosovo suggests that the Southern Confederacy of the United States should reform, demand their rights and also be allowed to declare their independence from the Union.

The attack on the Southern Confederacy by the North had nothing to do with slavery, though if you watch US movies then it would appear that this was the sole reason for the Civil War.

It was as aggressive war, with ethnic cleansing and mass murder, the North and the Union invaded independent Southern territory illegally, they stole the land and as such the Union of the present United States has as much legitimacy as the Soviet Union - another empire carved with blood and violence.

The Southern States did not fight to retain slavery - they fought to keep their liberty, their lands, their culture and their economic independence.

The Union states were run by corrupt bankers, oligarchs and politicians who wanted to economically exploit the Southern States as they were exploiting the Northern States.

It was only after the war had been fought for two years that the North even muted the idea of endng slavery, and this was simply to recruit blacks to act as cannon fodder against the South.

The slaves got their freedom only if they were prepared to fight and die for the North.

The War Between the States began because the South demanded States’ rights and were not getting them. The Congress at that time, heavily favored the industrialized northern states to the point of demanding that the South sell is cotton and other raw materials only to the factories in the north, rather than to other countries. The Congress also taxed the finished materials that the northern industries produced heavily, making finished products that the South wanted, unaffordable.

( Which was also the basis of the War of Independence from Britain in the first place ! )

We have been taught that the Civil War was all about the abolition of slavery, but this truly did not become a major issue, with the exception of John Brown’s raid on Harper’s Ferry, until after the Battle of Antietam in September 1862, when Abraham Lincoln decided to free the slaves in the Confederate States in order to punish those states for continuing the war effort. The war had been in progress for two years by that time. Most southerners did not even own slaves nor did they own plantations. Most of them were small farmers who worked their farms with their families. They were fighting for their rights. They were fighting to maintain their lifestyle and their independence the way they wanted to without the United States Government dictating to them how they should behave.

The example of Kosovo should now also be used by American Indians to claim back their lands from the US government, and in particular the Black Hills which is a sacred place for the Sioux.
Posted by Defender of Liberty at 01:27

Look for Stalin and Mao.

Perhaps I shouldn't be surprised that I also thought of the Confederacy when pondering the situation in Serbia/Kosovo. I take it you copied and pasted some of the info as "favourite" is spelt the US way in your text. Indeed the Civil War was fought for many reasons though "slavery" cannot be excluded - by any means. Every Northern state that fought (apart from Rhode Island) had had slavery but when it was no longer viable it ceased. Slavery would have ended naturally in the South and perhaps if it had - for the sake of 20 years or so the viscious racsim that grew (and existed in the North) might not have happened. Freedom is the most important state for any man - and though I am a natural supporter of the south I am glad that slavery was abolished. There were many fine and noble men who fought on both sides of the Civil War - their courage should always be recalled.