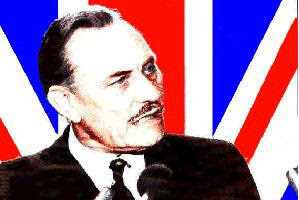 The BBC documentary on Enoch Powell 'Rivers Of Blood' was interesting though confused and muddled.

It began by criticising Enoch Powell by saying he was wrong on the racial problems that he predicted would blight Britain ( it makes you wonder whether the BBC journalists actually live in Britain) and then ended by saying that Powell was right and that the problem was culture, Islamism and the lack of integration.

To hear a sucession of Establishment stuffed shirts all admit they were talking out of their arses when they propagandised Multi-Culturalism in the past was an timely confession.

To say they did not understand that immigrants would demand from the multicultural state Sharia law, the execution of homosexuals, stoning for adultery and the removal of rights for women was laughable.

It appears that the old establishment politicians had a very racist and paternalistic view of immigrants. To them they were all just jolly nice people with sun tans who would be no bother once they were bunged a few quid and allowed to wear their turbans and attend their mosques. The idea that the process of multi-culturalism would lead to the 7/7 and 21/7 bombings was about as far from their minds as they were as far from living next door to them.

It revealed just how ignorant those politicians were in the first place, especially tht vile Labour reptile Roy Jenkins.

This whole process of pernicious social change began under the 1966 Housing Act, brought in by the Labour Party MP Roy Jenkins, which changed the nature of the Welfare State from entitlement by merit to entitlement by need. This was the moment when the process of Multi-Culturalism, an ideology imported in from Canada, was first imposed on the UK.

As a result indigenous white working class families living in sub standard accommodation, but on the housing waiting lists, were sent to the bottom of
the housing lists in places such as Tower Hamlets so that homeless
immigrants that just entered the country were prioritised for any vacant
housing in the area. Where before a white working class family started at
the bottom of the housing list and earned a move up the list to better
accommodation through good behaviour and length of time on the list, this changed and they were forced to stay where they were whilst immigrants were given all the new homes and best houses in their areas. This was the start of state institutionalised system of Politically Correct racism against the indigenous people of Britain.

This system was perpetuated by Thatcher. Instead of punishing the Brixton rioters, she rewarded them. The Race Relations Act was tightened and state money poured out into the pockets of any self appointed representative of any ethnic group that stood up and demanded it.

Michael Hesletine, one of the greatest traitors this nation has ever vomited up, was one of these Tory creeps that pushed multi-culturalism. This was because at the time he was making plenty of money out of it. He ran a job agency that assisted immigrants to take British workers jobs. He supported the race relations acts as it put money into his pocket.

He also hated Enoch Powell as he was a man who gained his position and respect by the nature of his personality and talents, and not simply by an accident of birth.

It wasnt the Loony Left councils like Islington that began this process of the multi-cultural ' Cash Machine State' that doled out money to any ethnic group that could fill in a 'free cash form', it was Thatcher and tories.

As a result of sending out the signal after the Brixton Riots that Terror = Rewards then the entire immigant population learnt that the government was ready at any time to surrender to terror.

Remember that the next time you are tempted to vote for the Fop Party.

The most interesting piece though was on the Race Relations Act. The race acts were brought in to supposedly to stop racism on the basis of an individuals skin colour, but instead they have institutionalised such racism.

Now if you have a White skin you can be treated in a racist manner by the Police, Fire Service, Government and any other organisation that wants to brown nose the diversity mafia that run the country.


Sir Ian Blair was found guilty, in July 2005, of racial discrimination against white Police Officers after his Force was found to have racially discriminated against three white Officers who were disciplined after falsely being alleged to have made racist remarks at a training day. The Employment Tribunal said Sir Ian Blair, barely five months into his post, had “hung his own Officers out to dry” and was also found guilty of “prejudicing internal disciplinary proceedings against the three CID Officers and of treating them unfavourably”.

Sir Ian Blair, who at the time of the allegations was Scotland Yard's Deputy Commissioner in charge of Diversity, was said to have trusted the word of an female Asian Officer, Detective Sergeant Shabnam Chaudhri, over that of the three white Officers, who were later absolutely and unconditionally cleared of any wrongdoing whatsoever by the force's most senior Asian Officer, Deputy Assistant Commissioner Tarique Ghaffur.

Detective Constable Tom Hassell, 60, Acting Detective Inspector Paul Whatmore, 39, and Detective Sgt Colin Lockwood, 55, won their claim for racial discrimination against the Metropolitan Police. The Tribunal Panel, sitting in Stratford, East London, ruled in favour of all three Officers, saying they had been treated differently and prejudicially because of their white race. The hearing was told that Sir Ian's attempted intervention was made without his having investigated the case or even seeing the evidence used by the Police Investigations Board.

Even Sir Ian Blair of the Met Police, a convicted racist, is allowed to stay in his job just because the victims were white !

Whilst the police are forced to endure brain numbing anti-racism propaganda courses similar to those that US airmen shot down over Vietnam had to endure at the hands of the VC, the top cops are more than happy to be racist against whites.

But the price of challenging lies, corruption and the prevailing stupidity of an era is to be attacked by all those maggots that are the corrupters, the stupid and the blind.

Powell was a conviction politician, whilst today we have career politicians.

We have New Labour ponces and Tory Fops in Armani suits that are excreted from university straight into some middle class constituency and then slimed into Parliament.

They know nothing about the real world and are nothing more than corrupt little money grabbing parasites, feeding off the nation and people.

Powell shined a light on their sordid little world, and they all scuttled away like cockroaches hissing at him.

Today the cockroaches in their palaces still run the country.

From the Palace of Westminster, Buckingham Palace to the palaces of Archbishops and the Ivory Towers of the BBC and the media quizings - the whole country is corrupt and run by traitors.

Powells legacy to us all is that he will forever represent the eternal ideal of the honest, loyal, uncorruptable politician that will forever be held up as the epitome of a true Parliamentarian.

As long as one true bloloded Briton still fights for Britain and liberty, then the example of Enoch Powell will inspire them never to surrender.

Powell once said that all political careers end in failure.

Today Enoch Powells victory is that his life is still capable of inspiring generations who never met him or heard him speak. Today for us all he represents the epitome of the noble and loyal politician who put country before career and principle before profit.

The fact that only by ruining his own political career in the Tory Party did he become a true icon of true Britishness and the archetype of a patriotic, nationalist and honest politician is an irony I think he would have enjoyed.


Enoch Powell - Tribune of the People.
Posted by Defender of Liberty at 06:18

After seeing the documentary about Powell it struck me how much dignity the man had. He was a truly remarkable statesman.

Leap forward 35 years - what nappywipe MP fresh out of political studies at university comes close to the profound thinking AND delivery of Enoch Powell? They are all a bunch of brown nosing, virtueless, smiling chancers and social climbers.

Of course he was right. Powell came from an era when (some) politicians had respect and the public still had respect for them, He had, as did many more people then the ability to express ideas with clarity and intelligence.

Do we see an Enoch recognition revival emerging?
It should.
The man was, still is, a hero, a gentleman, a modern sage .... and an inspiration to millions!

Lee John Barnes wrote ... To hear a sucession of Establishment stuffed shirts all admit they were talking out of their arses when they propagandised Multi-Culturalism in the past was an timely confession. ... I did not hear that. Indeed, to see the tears in the eyes of Tarzan Heseltine speaking of “Diversity for thee, enrichment for me” was a revelation.

Lee John Barnes wrote ... To say they did not understand that immigrants would demand from the multicultural state Sharia law, the execution of homosexuals, stoning for adultery and the removal of rights for women was laughable. ... I would hazard a guess that they were at least not planning this, because as Lee John Barnes wrote ... It appears that the old establishment politicians had a very racist and paternalistic view of immigrants. To them they were all just jolly nice people with sun tans who would be no bother once they were bunged a few quid and allowed to wear their turbans and attend their mosques. ...

I found the program contemptible.

In my opinion there has not been a significant change of course by the Ruling Class with the BBC's “Get Whitey” season, rather a realisation that if the indigenous inhabitants of the UK are to be cured of their instinctive desire to preserve their Ethnic Genetic Interest then a modified Multiculti Medicine will be required.

The Powell program was reminiscent of a US TV show where there are a massively disproportionate number of non-whites in positions of authority and Mr White Guy is portrayed as ineffective/stupid bigoted etc. I would hazard a guess that the Ruling Class are simply releasing some chaff by giving lip service to downside of multiculturalism whilst further undermining the indigenous population. As one instance I cite the appearance of the Multiculti Extremist Parek in this program and his passing comment on Powell.

In 1977 Enoch Powell made a speech The Path To National Suicide forecasting our current fate which is well worth reading in full.


The Island Model with Stochastic Migration

The theorem doesn’t say you get a mixture of old and new. The theorem says you get complete replacement of the old by the new. The old goes extinct. This is pure genetic replacement. It doesn’t matter if there is an intermediate mixture or not. Over time, the initial stock is replaced completely. Promises of a mixture are false.