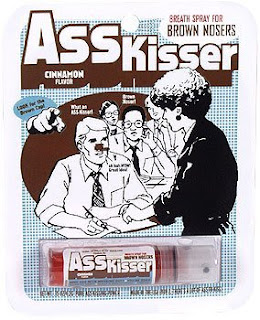 Hi there folks - the first of the Jack Black Merchandise range is now in stock.

Yes its Jack Blacks Ass Kissing Breath Spray, for all those like jack that like to kiss ass.

Heres Jacks latest post on stormfront to Mr. Jackboot ( I dont think that is real name) ;

"Please excuse the highlighting of the words he aims at you, Jack.

But I wanted both Stormfront and you to know just how far this Nick-pandered psycho feels he is able to go. Commonsense dictates that Griffin will have known of his behaviour BEFORE this latest outburst.

HE HAS NOT MUZZLED HIM. "


What a little ass crawler.

Please Mr.Jacboot may I lick your boots please sir.

The only thing worse than a gutless red that throws bricks through someones windows late at night then and runs away is a so called 'Nationalist' that hides behind a fake name and posts attacks on real nationalists on Stormfront.

Real Nationalists of all parties are public nationalists.

They stand in elections, they campaign in their communities and they take the flack from the reds, idiots and state as they are standing up for their people and their principles in such a way that we can know them and trust for their skills and faults.

The lowest scum on earth are those that call themselves Nationalists, but who spend their entire time attacking real nationalists on the internet but WHO DO NOTHING for our people in the real world.

The KeyBoard Warrior has become the curse of Nationalism - most of them are reds who have realised that as long as they have a picture of Hitler as an avatar and always bang on about ze jews that they can float like a turd to the top of the cess pool that is stormfront.

Those moderators on stormfront that cannot see that the easiest way to infiltrate the site IS BY TELLING THEM WHAT THEY WANT TO HEAR BY BEING THE BIGGEST HOLLYWOOD NAZI POSSIBLE, are the biggest mugs on the planet.

Heres the Second Rule of Nationalism - If any so called nationalists attack Real Nationalists from behind a keyboard and yet are doing nothing in the real world for our people and our community then they are probably reds.


The real tragedy of the Keyboard warrior situation though is that the invaluable tool that was the internet has been ruined by these fake nationalist scum.

Muppets like Jack Black appear from out of nowhere with a big mouth and no history of doing anything in the movement apart from running their mouth off and running an internet site, and they develop a little clique of simpering acolytes that gather around.

Who are these people - no-one knows them, no-one knows anything about them - they are just names on a page on the internet - but what we do know about them is that they spend as much time attacking real nationalists as the reds do.


By your deeds shall you be known - and by their deeds all we know is that they spend as much time attacking real nationalists as the reds do.

Therefore they should be treated as reds.

These nobodies from nowhere who dare open their big mouths and attack those people who are real nationalists, who have worked for our victory and been attacked for it by the enemy time after time, are the Inner Enemy.

It is very easy to set up an internet that is supposedly 'nationalist', talk big on the internet and at the same time gather as much information and gossip as possible from people who are busy slagging off real nationalists.

How do people think that Searchlight gets all their information - it is from fools and gobshites that spend their time talking bollocks on the internet and talking to reds that pass it onto Searchlight.

The Honey Trap is a classic state sting against everyone from the mob to nationalists throughout history.

Those that talk big, but who do nothing are NEVER to be trusted.


Yet the stormfront nobodies think they can smear real nationalists, villify them, attack them and slander them - when they themselves are less than nothing.

In many ways I have more respect for Dennis Garside, the Lancaster Unity Transexual, than I have for any of the stormfront maggots that attack nationalists and who hide behind a fake name to do so.

AT least Dennis is someone who is public about who they are and what they stand for and we know who it is when he/she abuses us, unlike the stormfront maggots that attack people from behind a keyboard using a fake name.

I may loathe and despise Dennis Garside with every inch of my being, but at least I can respect him/her for having the balls (or not the balls to be precise since he had the operation )to be open about what they believe.

The stormfront /AFA scum are the exact same kind of filth - gutless cowards that can only give it large behind a keyboard or behind a mask. Neither of them have got the bollocks to give it large in a way that means they can be responded too like men - instead its bricks through windows at midnight and abuse on an internet forum.

What a pack of wankers.

Anyone AFA wanker that thinks its brave to throw a brick through a real nationalists window and run away aint worth a squirt of dogs piss - and the same goes for those scum on stormfront who do the same thing to real nationalists.

So all you gutless stormfront bastards - lets see if you are real men.

Use your real names when you attack real nationalists - if you dont then you are scum and are probably reds and I will out you as the cowards you are.
Posted by Defender of Liberty at 11:54

AshtonScout it appears has the initials D.J.

Sorry I must apologise;

Jack Black has in fact published two books since appearing out of hishole both of which the profits go straight to jack black himself.

That is called profiteering.

Typical internet keyboad warrior, all mouth and no bollocks.

It seems you are not only a profiteer off of nationalists but now also a liar to boot.

How much money from your books you have sold has been donated to a nationalist political party, how much of the profits donated to the families of those listed in your book of white murdered people, how many nationalist causes have you funded.

All the profits go straight into your pocket and not into the movement.

Crawl away jack, just crawl away.

The outing continues until the attacks on individual nationalists on stormfront ends.

The minute that stormfront understands that as long as it allows attacks on individual nationlists that we will out them, then the outing will end.

Four threads on stormfront all about me on 19th march - thats gotta be some sort of record.

Regarding the wankers on Scumfront who attack real Nationalists while hiding behind fake names.

Griffin, the BNP Ballerina and the BNP's Jewish councillor are frequent targets for their bile.

As for the argument that outing them makes them a target for the Reds I would disagree. The Reds attack those they fear. They certainly don't fear a bunch of internet wankers with a Nazi fetish. To the Reds these people are just a subject for ridicule. The Reds know that Nutzis will always be unelectable in this country and therefore never a threat to the Status Quo.

Jack Black has not made a single penny from his books. But not for want of trying. It's because he hasn't sold any. He gave one to me and it was so boring I gave it to Oxfam, and it's been in the 10p box for over a year.

Blimey its FIVE threads on me on stormfront - thats more then Hitler got on his birthday. He got a cake though, I didnt.

BLIMEY - thats gotta be a record.

How about some Jack Black brown Y-Fronts too? He could do with some judging by his recent panic-stricken posts.

Blimey i think a strange form of Stormfront Autism has broken out.

Imagine ten dribbling morons hiding behind their keyboards, all seeing me being behind every post on the site that they are not responsible for and all typing out my name about a hundreds times a day and starting threads about me.

Hey its The Rainman Collective.

I think they think I am the Scarlet Pimpernel - everywhere at the same time.

That takes hard work and dedication to get that large.

Is their no end to their obsessions !

I must be the most debated nationalist on the planet at the moment.

If anyone wants an autograph then e mail me and I will send you one.

HA HA HA HA HA HA whe I set up just one of the many fake accounts for stormfront I use in the name of 'the wolf' I thought they would have realised it by now.

With just a single post attacking Lee Barnes and accusing the moderators of stifling free speech - they go and open another thread up attacking me.

Keep it up lads - the more threads are left open the more traffic to here.

Lets give em a clue eh - one of my other fake accounts also attacks Lee Barnes (that way they all go 'hes alright' - muppets )and there are three fake ones I presently using.

Its just so easy.

you are a fucking arsehole - a nothing. A big mouthed keyboard warrior nothing.

As for going mental - you are mental case already you complete cock.

Defender of Liberty said...
AshtonScout it appears has the initials D.J.

But since I've already been "outed" by P T Droid this is a known fact.

Since I am here perhaps I can ask why Andy Sykes, Ian Cobain etc weren't taken to court?

ooops, sorry, that's a "Dad's Army" GERMAN WW2 joke, I must be a Nutzi

Not publishing my response then....ok

Can't take it but you can dish it out