Film Review - There Will Be Blood 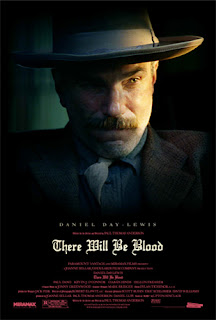 Everybody, soon or later, sits down to a banquet of consequences.

In Odinism their exists the concept of the mystical moment when a higher form is born, a moment of qualitative change and punctuated equilibrium.

That concept is expressed by the rune Dagaz, and it is the rune of dialectical change.

The Film 'There Will Be Blood' is an epic, the like of which rarely comes along.

The film depicts such a moment of change, the transition from the old world to a new world.

Yet this momentous process of civilisational change begins with men like Daniel Plainview, alone in the bowels of mountains working deep within dark, hand hewn mines drenched in sweat and lit only by a single candle as he strikes against the rocks with his pick as seeking the hidden seams of gold and oil within the subterranean world.

One palm blistering second at a time.

Back breaking day after day.

Slow year after year alone at the pit face in the hot, musty darkness seeking to tap a ripe vein swollen with sweet crude oil, seeking that sudden surrendering of the earth to the drill in a shuddering, frenzied moment of penetration that sends oil and water erupting from the earth and gushing forth into the daylight as a fountain black as midnight.

The scene where Eli Sunday exorcises the devil from an arthritic old woman is brilliant. It is both shocking and moving.

Daniel Plainview is the sort of man who builds nations. From the first scenes in the film that for fifteen minutes are completely silent where we meet the character as he is slaving away on his own in the middle of a mine looking for gold to where he crawls with a broken leg through the wilderness to the mining camp to sell his mined gold - we get to know a man who has a destiny and a will to power that cannot be checked.

The film has scene after scene of such beauty.

One simple scene is Daniel and H.W driving a car in the desert along the railway tracks of the Old West, the emptiness of the landscape and snow capped mountains stretching into the distance behind them as dust clouds tumble and roll from the wheels, then they suddenly pull into a small town of wooden houses that appears out of nowhere.

The desert deceptive in its its dowdy rags of rock and bush, hid amidst its penury a treasure disguised in the strangest form. Black tar ribbons that ran amidst the dust and sand clagged rocks oozed oil springs, the petrified blood of primeavil forests, the flora of aeons compressed into liquescent hydro-carbons and rivers beneath the rocks.

The scene where Daniel and his oil team are waiting for a well to come in are awesome. The banshee birth cry of a new well, whose amniotic fluid bursting forth from the earth ruptures the ear drums and deafens his son H.W, is also the birth cry of a New World.

The sudden pillar of fire erupting into being as the oil ignites then sears the night with its diabolical flame is suggestive of the evil that will be unleashed in this new age - a world of warships, tanks, jet fighters and mass invasions all made possible by oil.

This film captures the essence of evolution and hence concerns a moment of birth, and also of death. It is a film about the passing away of one era of human existence, the Pre-Oil Era and the transition into a new era that of the Oil Age. It was oil that made the possible the war of ideologies that defined the Twentieth Century, for all forms of human society, politics and economics were and still are almost totally dependent upon oil. Oil is the essence of all advanced human societies present upon the planet today. All forms of human social, economic and political organisations above the subsistence level are almost entirely dependent upon it. The pyramid model of the oil extraction, refining and supply process is the template for most economic, social and political models of the 20th century.

The modern world and all forms of supply and demand systems can only exist due to oil. When the oil runs out, then unless mankind has in place alternative forms of energy production systems to sustain the present level of social complexity, and facilitate the expectations of its growing populations of future wealth and prosperity through increased economic growth, all then modern civilisations will either suffer internal social collapse or embark upon the final stage of their existence which is perpetual Eco-Conflict and resource wars.

The end result will either be a slow and sustained drift back towards the Middle Ages, constant low level wars around the world or a single global apocalyptic conflict.

Earth, air, fire, water are the four elements that merge into oil. Oil comes from the Earth. It is born first from water. It gushes forth into the air as a jet of water, then oil and finally it bursts into furious fire.

But this energy is meaningless unless it is utilised in pursuit of higher evolution. Instead we built the Plastic Age and mindless Consumerism and International Global Cpitalism, and squanderd the energy that was given for us in order to evolve to a new higher level of human existence.

The Fifth Element in Alchemy and the Mystical Traditions is either Love or Wisdom for the Higher Human.

In this case the Fifth Element was replaced by a far more base one, that of greed, and that is why the 20th Century was such a debased and murderous era. With the energy we gained from oil, we wasted it on killing each other in the names of profit and ideology.

The opportunity given to mankind to use the oil in order to transition him from the stage of reliance on fossils fuels to an era of sustainable renewable energy was squandered.

Instead mankind sucked the oil up from the ground like a junkies syringe sucks up the smack from the spoon. Man got greedy.

It is fitting that this film appears as we are about to enter the era of Peak Oil and therefore seeks to act as a testament to the experience of those great men who gave birth to the modern world with their picks and shovels, their sweat and blood and their dreams and greeds.


Today we are witnessing the end of the Globalist economic nexus that has shackled the entire world in debt in order to sustain the parasitic elites that infest our nations and the millions of minions that debase and prostitute themselves before them for their petty share of the profits.

Like dominoes each nation is topling one after the other into debt and economic disaster. We are witnessing the wheels of history come off and civilisations sent careering over the cliff tops of perpetual economic collapse.

There has been nothing like this since the Great Depression, and what we are seeing is a world of tranquilised consumers somatised by credit waking up the realisation that the bill is finally here and it must be paid.

The Petro-Dollar Recycling system was based on the idiotic idea that todays debt could always be repaid by tomorrows future economic expansion.

But this dependended on the absuridity of an eternal source of cheap energy, this being oil.

But as we all know, unlike economists, oil is a finite substance.

There was never going to be a perpetual economic expansion simply because the Earth is a closed finite system of limited resources and Man cannot breach the laws of thermodynamics.

Once the oil is gone - it is gone forever.

Mans Hubristic inability to control either his lusts or greeds has brought the Nemesis of his own making upon him.

There are too many humans, with too few resources.

Soon millions of working families will be unable to pay their mortgages and credit card bills, and when they are evicted from their homes they will find themselves living in vast tent cities on the outskirts of our towns as all the council houses have been taken up by immigrnats and asylum seekers.

It will be like the Grapes Of Wrath, with the homeless living in cities of tents.

Those who thought they could ignore reality will find the wolf awaiting them.

The delusions of succesive generations that they could ignore reality and live in the TV world of illusions and bullshit is now almost over - the stark reality is almost upon them.

Today we are witnessing the death of a world order, its collapse and implosion caused by greed and stupidity.

Yet at this moment a New Dawn is rising, the New Dawn of Nationalism.

From the rubble of this collapse will come a new force of change, one that will wipe away the lies and illusions of the past and set a grand new purpose for our people.

It will be a time of toil and sweat, a time of vengeance and score settling when the guilty will find themselves judged by those they have abused and exploited for so long.

Today we bear witness to this collapse, and prepare for the awakening that awaits us.
Posted by Defender of Liberty at 03:24