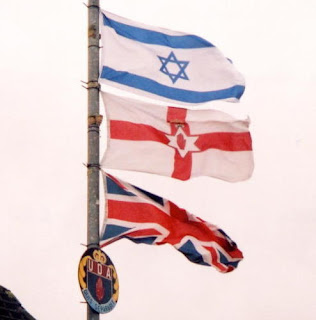 
For all those brain deads on Stormfront that cant accept that that the IRA were a fascist movement heres some more facts below.

Note also that the Loyalists that the stormfronters say they support actually flew ISRAELI flags from Protestant areas as a way to show they opposed the IRA/ PLO connection.


A PLOT by the IRA to link up with the Nazis to invade Northern Ireland during the Second World War was disclosed in secret service files published by the Public Record Office yesterday.

According to the MI5 records, Germany parachuted a spy into Southern Ireland in 1940 to assess the feasibility of the plan after being approached by the terrorist group.

But the plan was foiled after the spy, Dr Hermann Goertz, aka Heinz Kruse, or just "K", was arrested a year later by the Irish government.

advertisementThe memorandum, written in 1943, read: "On the 5th May 1940 Goertz landed by parachute at Ballivor, Co Meath, Eire. Earlier that year the IRA had been in touch with the German SS through the intermediary of Stephen Carroll Held.

"Held had visited Berlin with a proposal from the IRA for an attack on Northern Ireland by the Germans to be supported by 5,000 IRA recruited in Eire and Northern Ireland.

"Goertz's mission was to examine this proposal and to obtain. . . the military information on which the joint attack by the Germans and the IRA on Northern Ireland could be based."

The report says that he met Stephen Hayes, then leader of the IRA in Dublin, but the meeting was raided. While money, a radio transmitter and a German airman's cap were seized, along with the manuscript of the plan, codenamed Kathleen, Goertz escaped

Following the Israeli incursion into Jenin earlier this year, Paul Collinson, a British explosives expert working with the Red Cross, identified hundreds of explosive devices found there and noted that "the pipe bombs I found in Jenin are exact replicas of ones I found in Northern Ireland." The Daily Telegraph quoted a U.S. government official as saying in response: "If there was clear and convincing evidence that the IRA has been training Palestinians in bomb-making techniques, then we are facing a grave and grievous situation for the IRA — it would surely lead to a reassessment of whether the IRA should be put on the designated list of terrorist organizations with a global reach."


The incident came on the heels of a shooting spree of ten Israelis with a bolt-action rifle, perpetrated by a single sniper who left his rifle behind. This technique was also identified as a Irish Republican Army (IRA) trademark.

But the IRA's connections are not limited to the Middle East or the Palestinians. On April 24, 2001, the House of Representatives Committee on International Relations published the findings of its investigation into IRA activities in Colombia. Their report clearly demonstrated a longstanding connection with the Revolutionary Armed Forces of Colombia (FARC), mentioned at least 15 more IRA terrorists who have been traveling in and out of Colombia since 1998, and estimated that the IRA had received at least $2 million in drug proceeds for training members of FARC.

A more recent report, published in May by the Federal Research Division of the Library of Congress, identified Hezbollah, Hamas, and a number of other Middle Eastern terrorist organizations as active in Colombia and the Triborder Region (Argentina, Brazil, Paraguay, and Venezuela).

Last week, President Alvero Uribe declared a state of emergency in Colombia as a result of mortar attack by FARC terrorists during his inauguration. This attack killed 21 people and injured 60 more, and was followed by further attacks resulting in more than 100 people dead. Colombian law-enforcement sources have confirmed that the bombing techniques used by FARC are identical to those used by the Irish Republican Army.

The IRA and the Nazis all belonged to the same church. Their blood-brotherhood in terror (along with Islam and the ANC) should surprise no-one.

The Secret History of the Jesuits and The Vatican Against Europe by Edmond Paris.

Taken together, this material will form a comprehensive picture entirely in support of your post, Lee.