Red Ken And The Nazis 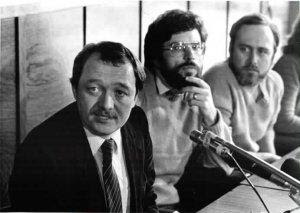 
Red Ken and the Nazis.


On St. Patricks Day the Mayor of London, Ken Livingstone, signed a petition demanding that members of the Irish community in London do not vote for the BNP in the forthcoming elections .


The idea that any Londoners of Irish descent can trust Ken Livingstone is an absurd idea.

Ken Livingstone has long and well documented links with one of the most murderous, vicious and powerful fascist and racist terrorist groups in history, the IRA.

Livingstone made perhaps his most controversial move as a politician in December 1982, when he called the IRA ‘freedom fighters’ at the height of their genocidal campaign of terror against all those they regarded as ’non-Irish’ and as leader of the GLC he extended an official invitation to Sinn Féin leaders Gerry Adams and Danny Morrison. In the event, Adams and Morrison were denied entry into the country under the Prevention of Terrorism Act and met with Livingstone in Northern Ireland instead.

The IRA are today still eulogised by many on the Left, but this is due to a gross misunderstanding of the history, aims and ideology of the IRA.

The IRA were, and still are, a fascist movement with the racist and genocidal aim of expelling everyone from Ireland and Northern Ireland that they regarded as not Irish. This racial hatred has historically manifested itself as hatred against all those the IRA regarded as English or Anglo-Irish and was the basis of their terrorist campaigns of ethnic cleansing.

Today, just like Ken Livingstone, the IRA and SinnFein support Political Correctness and mass immigration into Ireland and Northern Ireland, as they all see this as way to undermine the English and Anglo-Irish communities in Ireland and Britain. For both Ken Livingstone and the IRA, mass immigration is another mechanism in which to undermine and destroy the cohesion of the British state and diminish the electoral base of the Anglo-Irish communities in Ireland and Northern Ireland. The aim is still the same, the ethnic cleansing of the Anglo-Irish from Northern Ireland and Ireland it is just that the mechanism has changed. Now the plan is to accomplish this process via demographic change rather than car bombs and mass executions.

The IRA slaughtered not just English and Anglo-Irish people in their genocidal campaigns of ethnic cleansing, they also murdered thousands of innocent Irish people from their own community. Those Irish people that did not do as the IRA gangsters demanded were either executed or ordered to flee Ireland, and this is why many Irish people live in London today. They were fleeing the IRA, the racist war the IRA were undertaking and simply seeking peace. It is a tragedy for them and London that one of the main supporters of the Sinn Fein / IRA Axis was and still is Ken Livingstone, the Mayor of London.

Just as the IRA were racist and genocidal in their approach to the English and Anglo-Irish communities in Ireland and Northern Ireland, throughout its entire history both SinnFein and the IRA have been motivated by violent and extreme anti-Semitism.

The IRA were one of the main supporters of the PLO in its campaign to exterminate the Jews in Israel and ethnically cleanse Jews from Israel, and IRA terrorists trained PLO terrorists in weapons and tactics. In return the IRA were supported by radical Islamists like Colonel Gaddafi of Libya who armed and funded them. The weapons that the IRA used to slaughter innocent people in their campaigns in Ireland and Northern Ireland were supplied to them by radical Islamists and the Nazis themselves.

This historic links of the IRA with fascist and Islamo-Fascist regimes goes back to the Second World War when Sinn Fein / IRA, not only collaborated with the Nazis in World War Two, but today still commemorate their links to the Nazis.

The Nazis provided the IRA with funds, weapons, training and assistance in attacking the British.

Every year, Sinn Fein still hold an official ceremony to honour the statue of Sean Russell, a Nazi collaborator who died on a German U-Boat in 1940.

During the Second World War the Irish government preferred neutrality to fighting alongside the British army against Germany.

After Germany surrendered the Head of State of Eire, Eamonn De Valera paid a condolence visit to the German Embassy following Hitler's death and passed on his condolences to the German people for the loss Hitler.

Such was their hatred of the British (and the Irish Free State), the IRA were prepared to enlist the help of the Nazis to overthrow their own Government, undermine the British and reunite Ireland. By this time, Hitler's intentions were well known. Had the Nazis occupied Ireland, the Jewish community would have been wiped out and the Nazis would have had a valuable base from which to attack Britain. At the same time all those in Ireland that the IRA regarded as English or Anglo-Irish would have been ethnically cleansed from Ireland or summarily executed. A similar process occurred in Kosovo when the KLA with NATO assistance took over Kosovo and expelled Serbian civilians or slaughtered them In their own homes.

Ken Livingstone today still attacks the Jewish community with sick jokes about the Holocaust and invites Islamo-Fascists such as Al Qaradawi to London. Al Qaradawi has called for the destruction of Israel and stated that slaughtering Jewish civilians with suicide bombs is a legitimate tactic for terrorist groups like Hamas.

Those of Irish descent cannot trust Ken Livingstone for he speaks with a forked tongue. He sups with those that have the blood of thousands of innocent Irish, English, Anglo-Irish and Jewish blood on their hands and yet hides his support for fascism beneath the rhetoric of anti-racism, and political correctness.

How do you reconcile this with the fact that Sinn Fein support the Multiculti Project in Ireland? Or is it that "anyone but the English" are acceptable to Sinn Fein?

Exactly - the english are the enemy, whilst a load of powerless minority groups will allow Sinfein to dominate the political process due to their innate ethno-centric solidarity as a political group representing the largest ethnic community in Ireland.

defender of liberty wrote "... minority groups will allow Sinfein to dominate the political process ..." So you mean that Sinn Fein is importing a new Electorate?

defender of liberty wrote "... the english are the enemy ...". Indeed, a proportion of the Irish appear to be happy as long as their overlords are not in London. I asked the question ... Thousands of people were killed and thousands more maimed to end British rule in the Six Counties. Now approximately 80% of government decisions emanate from Brussels ... So was the PIRA campaign for the right of the Irish to be governed by the Irish, or by anyone but the British? Do the Irish in 2008 have more political control of Ireland than in 1908? If not, why not and why do they find it acceptable? If the massive level of immigration had been from the UK, as opposed to the rest of the world, would it have been accepted? If not, why not? Is being Irish now defined by geographical location?
... Various replies can be found at Why the Irish and the British should understand the difficulties with multiculturalism

exactly - an electorate of splintered groups that can never organise to threaten sinnfein as the main and largest group.

Might I ask whether this article was copied from the BNP website or vice versa? Since I expect that Chris Brown and Lee Barnes are different people it might be worth putting a link to the source article in.

I wrote this but the editors of the site have so many articles sent to them each day that I think they made a mistake on the names of this one.

Thats ok - better to make mistakes due to popularity overload than be perfection through lack of interest.

Note that many incomers to Ulster are Polish, as here.

They too belong to the same church as the IRA.

Note the other arm of the pincer. The 'Protestant' Church in this country, the CoE, has been so stripped of its identity, as set out in the 39 Articles of Religion that it tends to arouse nothing but contempt these days.

Excellent article, Lee, thanks. Definitely another one for prominent bookmarking.