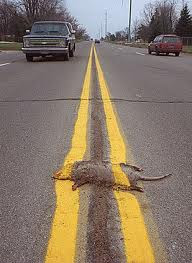 I have to announce some tragic news.

I have had reports this evening of the demise of the greatest propagandist this side of The Third Reich, Paul Morris AKA The Green Arrow.

With the Fuhrer Bunker in Belfast mired in despondency as the Fraud Squad approach to within just yards of Griffins gold encrusted throne, it appears that many of Griffins most trusted junior officers are now choosing suicide instead of surrendering to common sense.

I have been sent the above photograph from a correspondent at the scene outside the Belfast Fuhrer Bunker.

Apparently an hour or so, the front door burst open and out ran Paul Morris in just pair of white Y-Front underpants, wearing a Nazi helmet made out tin foil and waving an unmbrella.

He was heard to shout " I will show the bloody members just how much I love Der Fuhrer by running all the way to London and killing the schwinehunten pig dog Barnbrook ".

As he stepped out into the road he was immediately struck by a council road marking lorry.

Unfortunately the driver did not notice Morris due to his diminutive stature, as he is just under three feet tall.

The Green Arrow blog will continue though in honour of their fallen Propaganda Minister, though it will be renamed 'Roadkill or Martyr' as a sign of respect for his valiant actions in seeking to secure for history the name of Nick Griffin.

Posted by Defender of Liberty at 11:39

From what I'd seen of your posts before I had the impression that you was a decent fella, if a little out spoken sometimes.
Now I'm starting to think that you are barking mad mate.
Sorry, but you seem to be attacking folks who have no influence over the loss of your position within the party. I can understand that you feel somewhat put out by what has happened, but this is not the way to vent your flustration.
Our caurse has enough problems already.

Oh yeah GA is just such a great bloke.

Threatening to post up online the names AND ADDRESSES of those who nominated anyone but Der Fuhrer Griffin.

What a truly GREAT patriot, in that great line of patriots like Sadie Graham and Andy Sykes.

Theres no point arguing with one of Griffins Moonies.

Just believe everything your cult leader tells you and you will be just fine.

"Threatening to post up online the names AND ADDRESSES of those who nominated anyone but Der Fuhrer Griffin."

For some time I have been convinced that the leaking of the BNP membership list which I was on, was the work of Nick Griffin and associates. It's the only thing that makes sense to me.

You JLB are one sick individual!

I know how you feel mate, you will remember clearly that I was against this all together as I was against any of it from any side.
My Loyalties remain with Nationalists, this is you, together with the rest of my Brother and Sisters; Warts an all !

You must reflect, infact I believe it would be a good idea to show what a man you are and remove these self destructing and consuming comments.

You are just so much better than this.