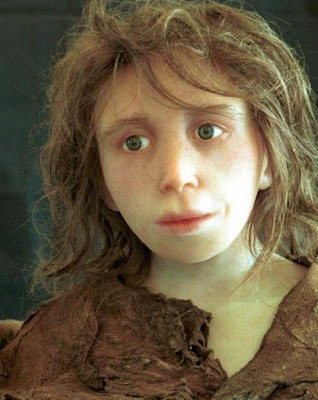 
Everything you have been told about the issue of race is wrong.

And that includes from the Far Right, Liberals and the Far Left.

But the origin of racial differences has never been revealed or stated as being linked to the percentage of Neanderthal DNA we each possess within us individual components of a homogenous racial unit.

DNA testing has now revealed that Modern Europeans share at least 4 % DNA with Neanderthals and that the Cro-Magnon's, from which all true Europeans descend, are an ad-mixture of Homo Sapien and Homo Neanderthalis DNA.

It is this fact, that Modern Europeans are part Neanderthal, which is the explanation of racial differences.

Modern Europeans have a minimum of 4 % DNA from Neanderthals = Whites who are the descendants of the Cro-Magnons.

The Cro-Magnons were the result of breeding between Homo Sapiens and Homo Neanderthalis in Europe.

East Asians have 2 % DNA from Neanderthals = the Oriental racial groups.

It appears that DNA in people moving from Europe, whose migrations are evidenced from the Tocharian people who were present in China around 4000 years ago, that had moved East along the Silk Road in pre-history is responsible for the dissemination of Neanderthal DNA in populations of the Far East.

Black Africans have no DNA from Neanderthals = African blacks.

It appears that Australian aborigines do not have any Neanderthal DNA either, so they are also archaic Homo Sapiens from Africa.

It is this issue, the fact that Modern Europeans and East Asians are part Neanderthal that is the basis of racial differences.

We should now concentrate on propaganda that puts this point forward - that we humans are not a single species of Homo Sapiens and that we are not all one race, but that we Europeans carry within us the legacy of a lost race and that even in our minor DNA differences between us as a race we all share this legacy of being descended from a separate species of Hominid.

The white skin of the Modern European people is inherited from our Neanderthal ancestors and is also shown by the pale skin tone of the East Asians as compared to modern Africans.

The more Neanderthal DNA a racial group possesses, the lighter their skin tone.

White skin is a product of the Neanderthals evolving in Europe and the Cro-Magnons inherited the white skin genes from their Neanderthal ancestors.

Race is in fact evidence of hybridisation between human species.

It is this reality that will be the basis of future racial theory.

The DNA difference between human beings and chimps is around 4 %.

The percentage difference in DNA between Modern Europeans and Modern Africans is around 4 % as well in relation to the percentage of Neanderthal DNA.

Therefore racial differences are as distinct between Modern Europeans and Modern Africans as between human beings and chimpanzees.

It may be that 'racism' is itself a sub-conscious recognition of the differences between racial groups based on them being different in relation to Neanderthal DNA.

That means racism cannot be eradicated unless we eradicate all racial groups at the same time.

The only 'pure race' are Modern Africans as they are pure Homo Sapiens.

Therefore the idea that Modern Europeans are racially pure is false, we are not racially pure as we are part Homo Sapiens and Neanderthals.

Our genius as a race comes from our Neanderthal heritage.

Personally I am proud of my Neanderthal heritage.

The mixture of the Neanderthals and early Homo Sapiens created the Cro-Magnon people, whose arrival in the historical record is marked by an explosion in Europe of creativity linked to art, culture and technology.

The Neanderthals were the first human species to achieve forms of culture.

No theory of race has ever been devised to include this DNA reality.

All the old theories of race from the right to the left are wrong.

Posted by Defender of Liberty at 02:09

Now thats the stuff I enjoy reading, thanks Lee, :O)

I remember a program stating that neanderthals had larger brains so could have been more intelligent than the average human, but then we could ask why did they not dominate and wipe out the homo sapians with their potential superior brainsize?

I guess the answer will never be simple but one issue could simply be sexual maturity, it appears that the more intelligent a race is the later it matures, it could also be possible that these groups lacked aggression and were more inclined to negotioate rather than battle en masse, they coulod also have been more solitary by nature and less inclined to form large hunting tribes, neanderthals potentially being better able to think for themselfs such large tribes would not have been so neccesary if they were lesss inclined to violence. three such things could lead over time to their eventual asimulation.

which in part lives on, again today one could ask if the same situation is now happening again?

I agree entirely - maturation to sexual reproduction age would have been later in the Northern climate and so would infant mortality rates re the cold / snow / winters etc.

That is the exact lesson we need to learn from the Neaderthals, that allowing in colonists will cause your destruction via either genocide or assimilation.

The white race will merge into the black mass if we do not defend our lands now.

My that make me very Neanderthal, being very pale, blonde , Blue eyed... and well, very creative...

Lets have a 'celebrate our Neanderthal diversity day'..

If a group of animals can interbreed it means they are not truly a separate species but a sub species, in particular if they have fertile ofspring.

Thi argument could have been made for races as they already existed, it also shows a close common ancester.

It could be argued now that Neanderthals were simply a subspecies of human, no different to a isolated race that changed considerably, such as pygmies.

the important issue is not that whites have neanderthal DNA but what the distinct qualities of that DNA are.

We could take a look at wolfs and dogs, both are so close but distinct, but then so is the difference between breeds and all can interbreed, they can all be considered a subspecies and are all in fact wolfs.

At the point they can no longer have viable offspring from a cross do they become a separate species.

So If whites carry neanderthal DNA this is evidence that neandertals are a sub species of homo sapiens.

So the neanderthal issue while interesting may not be as big an issue as it may first appear and the human tree record is at best full of holes and dead ends.

In short out the issue of race hasn't really changed due to the neanderthal issue, it just became more interesting and harder for the marxists to simplify with crude propaganda.

There are some vulgar assumptions being made throughout the comments section.

When it comes to Neanderthal vs modern humans, big brain does not necessarily equal smarter as research on this topic shows. Neanderthals tools and living areas were never more advanced then the cro-magnon's, in fact as of now evidence shows the Neanderthals were more primitive then their counterparts.


there is a convincing argument that cold weather and harsh conditions might be the reason for some of the advances in early European lifestyles in order to survive the conditions, not smarter just different environmental pressures.

Both Asia and Africa have many earlier artistic, cultural, and technological advances that predate the Europeans, sometimes by a couple thousand years. under some of the implications being asserted in the comments, a fair counter argument would be that Africans advanced in many areas before Europeans without the need of Neanderthal DNA, therefore Neanderthal DNA slowed the advancement of Europeans. (I do not support either of the arguments for one side being more superior)

the entire statement about whites being merged "into the black mass" is retarded and racist. Who cares what color we all end up generations from now as long as it is through peaceful interactions. why would we care what color the world ends up as long as we get along. they will still be our children's children. by the time the"whites" are absorbed by the "black mass" your silly ass will be dead anyway.

maybe if only one color is on earth, we can get down to business instead of bickering. (but i fear the argument will change to, Oh we have light brown eyes or who is the blacker black)

some groups of humans may have this Neanderthal DNA from 50,000 years ago, do we need to study it? yes. will it give us insight to our past? yes. should it make a difference now in a manner that will shift our interaction with each other as equals? no. Are any of us any less "human" or entitled to any less or more privileges in life because of, or lack of that DNA? no. is there proof that any "race" is more less capable of producing people who can contribute? no. will dick bags continue to use any and every argument to support their idiot ideologies? yes.