The Gulf Oil Spill and the Pelicans 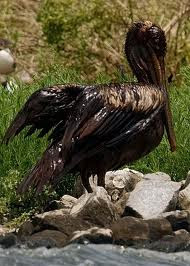 There are nowt so blind, as those that cannot see.

Here we see the problem with the modern mass animal.

It believes what it sees and what it is told by the media.

But the tragedy is that the media also believes what it tells itself.

The Gulf Oil spill is the worlds first disaster managed solely not for the benefit of the environment, but for the global news networks.

The last thing BP and Obama wanted was the oil washing onto the beaches and covering the birds and beaches in thick slicks of oil.

So the priority was media management, and so BP and Obama's administration allowed tens of millions of gallons of an oil dispersant known as Corexit to be dumped on the oil in order to break it up, dissipate surface evidence of the spill and ensure no media cameras caught the 'kill shots' of dying pelicans cloaked in a viscous black cloak of stinking crude oil being washed up on the beaches.


Nature can handle oil, as oil is a product of natural processes.

What Nature cannot handle is millions of gallons of toxic, chemicals being dumped into the environment.

The oil that used to float on the surface and cloak the birds is now under the water in globular form, its still there but the media cannot see it.

Therefore the media think the oil has gone.

It hasnt, its just floating about in a toxic soup of chemicals below the surface - and killing the underwater marine eco-system instead of oiling pelicans for the media.

But hey the media circus has now packed up and gone away.

There are no shots of dying pelicans, so no need for the media to be there.

And no worry for BP having more stock losses due to images of dead pelicans being beamed on the news to the angry sheeple.

This means that because of fear of negative media reporting causing a further loss of confidence in their stocks and shares, BP chose to contaminate and kill entire sections of the marine eco-system of the region.

The image of the dying pelican in the media will now be replaced by an hidden massacre.

Thats the massacre the media caused.

Its a massacre not just of the marine eco-system, but it will kill thousands of the poor local people hired to clean up the slicks that did reach the shore, it will kill and disable unborn children conceived in the region for decades to come, it will make local people chronically ill and it will devastate the local fishing industry for decades to come.

But still, look on the bright side eh - there were hardly any oily pelicans !

Posted by Defender of Liberty at 09:19