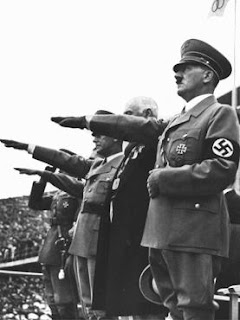 Image - Hitler at the 1936 Olympics does the Nazi Salute 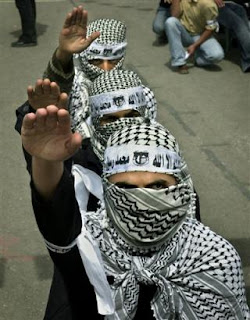 Islamist Palestinians in West Bank do the Nazi salute 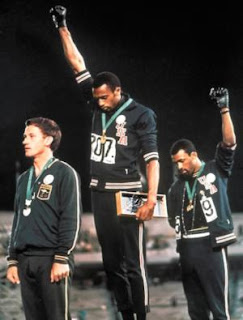 Black atheletes at the 1968 olympics do the Black Power salute


Interesting article on how Black Power is acceptable in British society, but anyone who dares cry white power is a racist and any Islamist who does a Nazi salute is a terrorist.

Black Power adherents believed in racial separation, black nationalism, and the necessity to use violence as a means of achieving their aims.

Eldridge Cleaver, a hero and proponent of Black Power wrote "Soul on Ice" in which he wrote ;

"I became a rapist. To refine my technique and modus operandi, I started out by practicing on black girls in the ghetto-in the black ghetto where dark and vicious deeds appear not as aberrations or deviations from the norm, but as part of the sufficiency of the Evil of a day-and when I considered myself smooth enough, I cross the tracks and sought out white prey. I did this consciously, deliberately, willfully, methodically-though looking back I see that I was in a frantic, wild, and completely abandoned frame of mind

In one essay, Cleaver described his rape of white women as “an insurrectionary act. It delighted me that I was defying and trampling upon the white man’s law … defiling his women.”


Black Nazis are ok in British society, such as The Nation Of Islam, who are allowed to join the police, prison service or any government organisation.

It appears that you can be as racist, anti-semitic or abusive as you wish as long as your enemies are white.

Black athletes Tommie Smith and John Carlos performed their Power to the People salute at the 1968 Summer Olympics in Mexico City.

White self hating liberals applauded them at the same time as they were attacking the 'nazis' in America such as Commander George Lincoln Rockwell.

It appears then, as now, that Black Nazis are 'cool' but white nazis or arab nazis are 'nasty'.

How wonderful it must be to so devoid or commonse sense, morality and intelligence that one can ignore such contradictions in ones beliefs.

The liberals truly are idiots.


Yet again it appears that when the nazis are black or rapists, its okay to applaud them and build a statue to honour them.

I pity the poor black women and white women who were raped by Cleaver and who have now to listen as he applauded as a hero of the American black community and black american history.

Posted by Defender of Liberty at 05:26