The People Come Before The Banks 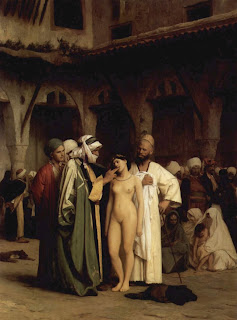 Throughout history the forms of slavery have evolved.

Then man enslaved the animals.

Then man created mchines to become his slaves, and now man is the slave of the machines he created.

We have created a so called 'free society' where men are less free than any time in human history.

This is because a society of Debt Slaves and a Wage Slaves is far easier to control than a society of free citizens.

The aim of forcing people into debt and dependence on credit is to keep them under control.

The media condition individuals into becoming slaves to False Needs, in other words to buy the endless crap of consumerism, in order for them to be kept under control.

The government needs it citizens dependent on debt in order to keep them quiet and under control.

The corporations that donate to the political parties require the media to condition people into buying their rubbish in order to make the profits to subsidise the political parties that getinto government and to pay for the advertising in the newspapers that promote their rubbish - it is a nexus of greed and corruption that depends on the public being slaves to their masters at all times.

The report below reveals just how much money the average family has to spend in order just to afford a home in their own country, and this is scandalous.

The fact that most working families will never be able to buy a home in their own country is proof that this nation has abandoned its people.

Hundreds of thousands of families are also now facing eviction due to the credit crunch - and this demands radical action.

Emergency legislation must be passed through Parliament allowing families to apply to the courts and suspend eviction proceedings and renegotiate their mortgage payments if they are facing eviction.

All families must be guaranteed a home in their own country, and if this requires the government invest in massive new council home building schemes then this must be undertaken - even if it requires the seizure of land owned by the large supermarkets and foreign coporations to get the land to do that.

Families must NEVER be evicted from their homes just to keep the fat cat parasite bankers in luxury - the people come before the banks.

Couples on average earnings now have to set aside two-thirds of their income to cover the costs of buying a home, new figures suggest.

If both were earning the average wage, they would have to save two-thirds of their take-home pay of £44,000 to cover the costs of buying a home.

A decade ago, couples on average earnings could have had to set aside just a fifth of their joint income to cover these costs.

advertisementCouples with a combined take-home pay of £27,500 or less would have to save more than a year's salary to cover a deposit, stamp duty and solicitors fees on the average first-time home, according to figures from the Royal Institute of Chartered Surveyors (RICS).

David Stubbs, senior economist at the RICS said the situation was likely to worsen.

"Access to the housing market has deteriorated as the credit crunch has taken hold of the mortgage lender sector.

"The picture does not look improving in the latter part of 2008 and first-time buyers will find their path to home ownership increasingly blocked."

RICS said the increasing difficulties faced first-time buyers were being driven by the huge deposits mortgage lenders now required, as well as the high level of stamp duty people had to pay.

Income for people in the lowest quarter of earnings has increased by an average of just 3.5 per cent a year since 1996, while house prices in Great Britain have soared at an average rate of 10.3 per cent.

However, the research found that affordability problems had eased slightly for people who were able to buy their own home.

It said a couple on the bottom quarter of earnings would now have to spend 34.5 per cent of their take-home pay on mortgage repayments, down from 37.2 per cent during the first three months of the year and a record high of 46.5 per cent at the end of 1989.

The improvement in affordability has been caused by a combination of falling house prices and the larger deposits people are putting down, leading to them having smaller mortgages.

London is still the most difficult place for people on low earnings to get on to the property ladder, with couples in the capital needing to save 133 per cent of their annual take-home pay.

The North East is the most accessible region, with couples needing to save 72.9 per cent of their annual income to buy a home.

Posted by Defender of Liberty at 02:27

When I first bought my home,35 years ago, it cost me £10,000 with a 10% deposit. It was a struggle back then to even get a mortgage, I was earning £60 pounds a week. My home is now worth £200,000, that's twenty times the original price. Has my salery gone up by the same? No way. It's must be frightening for many people. I would also add the old saying 'When poverty come through the door love goes out the window.

Sepp Blatter is with you when it comes to modern day slavery. He laments the slave status of poor old Cristiano Ronaldo, unfairly tied to a miserable £100,000-a-week contract he freely signed with Manchester United.