Mexico 1991 UFO's and the Shadow Government 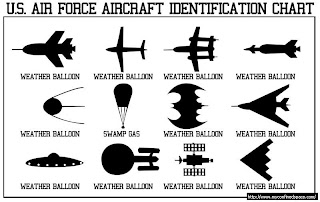 Another member of the armed forces reports seeing a UFO.

The official UFO US army identification chart above now has to be revised.

The fact that these objects have been proved to exist, and not just be swamp gas or chinese lanterns, requires an investigation into just what these objects are - whether they are weapons of some enemy nation penetrating our air space, drone aircraft which could be used by terrorists to attack ground locations or secret government weapons being tested.

These objects exist - the question should then be being asked - wat are they ?

Because these objects could be weapons, or used as weapons by terrorists or rogue states, then it is imperative that they be investigated and their agenda discerned.

A failure to investigate such objects is a clear breach of the duty of the government towards it citizens.

Whilst we invade Iraq to remove non-existent WMD's, we refuse to investigate objects seen by police and army pesonnel, that are caught on film and caught on radar, that are seen hovering near army bases (and could thereby be filming them) and that have been recorded damaging military aircraft is an act of either utter folly or planned decpetion.

I think the solution is the latter - in that the government knows these objects exist, that they are undertaking an agenda we have no idea of and that their existence raises real National Security issues that are so sensitive that they have to be surpressed.

For the American Military Industrial Block and the US Shadow Government to admit that the trillions spent on miliary defence are wasted as these objects are able to penetrate our air space at will, interfere with our weapon systems at will (as at Rendlesham Forest when the nuclear weapons were de-activiated) and that our weapons systems are useless against these objects would be to undermine the whole concept of having a Military Industrial Block.

ROYAL Navy aircraft engineer told yesterday of the moment he saw a UFO spinning above the M5 motorway.

Michael Madden, 25, watched in disbelief as it hovered, then disappeared at “incredible speed”.

He said the flying disc flew for up to three minutes above junction 21, near Weston-super-Mare, Somerset.

Michael was returning to Yeovilton base from Manchester with workmate Michael Casson, 22, at 9.50pm on Sunday.

The engineer said: “I work with aircraft and grew up next to Manchester Airport so I know exactly what a plane looks and sounds like.

“This was definitely not a plane.

“It was a circular disc which was glowing bright, hovering hundreds of metres up.

“Other people must have spotted it.

“It was unlike anything I’ve ever seen in my life.

“It really did look like alien aircraft in the films.

“It had an antenna fixed to the back.”

A UFO is just something that can't be identified.

Exotic Space Craft hope the link works this is well worth a read!