The Shadow Government attacks its own Citizens 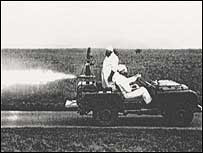 
There are those that refuse to believe the British government and security services that are supposed to protect our country and people would work with Al Qaeda agents and foreign governments, such as the US, Saudi Arabia and Israel, to set up false flag terrorist attacks to coerce the citizenry into surrendering their liberty for security.

Is it so fantastical to suggest that the British government would work with agents in Al Qaeda to organise terror attacks in the UK in order to drive through the Labour governments laws to remove our fundamental freedoms ?

Is it so absurd to believe that 7/7, like 911, was an inside job - that the government used its assets in islamist terrorist groups to work with islamist terrorists to assist in the creation and planting of bombs ?

Is it so insane to ask whether Dr. David Kelly was murdered as he knew that Saddam Hussein had no weapons of mass destruction and would have therefore gone public with the plot by the US Shadow Government and its puppets to invade Iraq ?

Here is the story of how the British government from the 1950's to the late 1960's has admitted using biological weapons against the British public by secretly exposing them to nerve agents in hundreds of illegal trials.

Any 'democratic governments' that would use nreve gas on their own citizens would have no compunction on using bombs against its own people.

Here are some of the research into the effects of the attacks ;

Here is an article about how the US also tested biological weapons on its troops and citizens ;

A centerpiece of the Bush administration’s propaganda to justify a US invasion of Iraq is the charge that Saddam Hussein “used gas against his own people.” This is a reference to the Iraqi military’s gassing of Kurdish villages in the latter stages of the Iran-Iraq War of 1980-88, a crime that was carried out with the tacit support of the Reagan administration and Reagan’s special envoy to the Middle East, the current secretary of defense, Donald Rumsfeld.

Washington’s professed horror over the use of poison gas is doubly hypocritical, now that it has been revealed that the Pentagon itself used chemical and biological weapons against American soldiers, sailors and civilians, as part of military weapons testing in the 1960s and 1970s.

A Pentagon spokesman confirmed last week that these tests took place during a 12-year period, from 1962 through 1973, exposing more than 5,000 soldiers and sailors and an unknown, but large, number of civilians—possibly “into the thousands,” the official said.

Here is the full story ;

This is the important bit of the article relevant to today " Sue Ellison, spokeswoman for Porton Down, said: 'Independent reports by eminent scientists have shown there was no danger to public health from these releases which were carried out to protect the public.

'The results from these trials_ will save lives, should the country or our forces face an attack by chemical and biological weapons.'

Asked whether such tests are still being carried out, she said: 'It is not our policy to discuss ongoing research.' "

IN OTHER WORDS THE TRIALS ARE STILL CONTINUING !

At the same time as this scientists a Porton Down were exposing British soldiers to nerve agents, biological weapons and giving them LSD as part of their psychological weapons test.


Millions were in germ war tests

Much of Britain was exposed to bacteria sprayed in secret trials


The Ministry of Defence turned large parts of the country into a giant laboratory to conduct a series of secret germ warfare tests on the public.

A government report just released provides for the first time a comprehensive official history of Britain's biological weapons trials between 1940 and 1979.

Many of these tests involved releasing potentially dangerous chemicals and micro-organisms over vast swaths of the population without the public being told.

While details of some secret trials have emerged in recent years, the 60-page report reveals new information about more than 100 covert experiments.

The report reveals that military personnel were briefed to tell any 'inquisitive inquirer' the trials were part of research projects into weather and air pollution.

The tests, carried out by government scientists at Porton Down, were designed to help the MoD assess Britain's vulnerability if the Russians were to have released clouds of deadly germs over the country.

In most cases, the trials did not use biological weapons but alternatives which scientists believed would mimic germ warfare and which the MoD claimed were harmless. But families in certain areas of the country who have children with birth defects are demanding a public inquiry.

One chapter of the report, 'The Fluorescent Particle Trials', reveals how between 1955 and 1963 planes flew from north-east England to the tip of Cornwall along the south and west coasts, dropping huge amounts of zinc cadmium sulphide on the population. The chemical drifted miles inland, its fluorescence allowing the spread to be monitored. In another trial using zinc cadmium sulphide, a generator was towed along a road near Frome in Somerset where it spewed the chemical for an hour.

While the Government has insisted the chemical is safe, cadmium is recognised as a cause of lung cancer and during the Second World War was considered by the Allies as a chemical weapon.

In another chapter, 'Large Area Coverage Trials', the MoD describes how between 1961 and 1968 more than a million people along the south coast of England, from Torquay to the New Forest, were exposed to bacteria including e.coli and bacillus globigii , which mimics anthrax. These releases came from a military ship, the Icewhale, anchored off the Dorset coast, which sprayed the micro-organisms in a five to 10-mile radius.

The report also reveals details of the DICE trials in south Dorset between 1971 and 1975. These involved US and UK military scientists spraying into the air massive quantities of serratia marcescens bacteria, with an anthrax simulant and phenol.

Similar bacteria were released in 'The Sabotage Trials' between 1952 and 1964. These were tests to determine the vulnerability of large government buildings and public transport to attack. In 1956 bacteria were released on the London Underground at lunchtime along the Northern Line between Colliers Wood and Tooting Broadway. The results show that the organism dispersed about 10 miles. Similar tests were conducted in tunnels running under government buildings in Whitehall.

Experiments conducted between 1964 and 1973 involved attaching germs to the threads of spiders' webs in boxes to test how the germs would survive in different environments. These tests were carried out in a dozen locations across the country, including London's West End, Southampton and Swindon. The report also gives details of more than a dozen smaller field trials between 1968 and 1977.

In recent years, the MoD has commissioned two scientists to review the safety of these tests. Both reported that there was no risk to public health, although one suggested the elderly or people suffering from breathing illnesses may have been seriously harmed if they inhaled sufficient quantities of micro-organisms.

However, some families in areas which bore the brunt of the secret tests are convinced the experiments have led to their children suffering birth defects, physical handicaps and learning difficulties.

David Orman, an army officer from Bournemouth, is demanding a public inquiry. His wife, Janette, was born in East Lulworth in Dorset, close to where many of the trials took place. She had a miscarriage, then gave birth to a son with cerebral palsy. Janette's three sisters, also born in the village while the tests were being carried out, have also given birth to children with unexplained problems, as have a number of their neighbours.

The local health authority has denied there is a cluster, but Orman believes otherwise. He said: 'I am convinced something terrible has happened. The village was a close-knit community and to have so many birth defects over such a short space of time has to be more than coincidence.'

Successive governments have tried to keep details of the germ warfare tests secret. While reports of a number of the trials have emerged over the years through the Public Records Office, this latest MoD document - which was released to Liberal Democrat MP Norman Baker - gives the fullest official version of the biological warfare trials yet.

Baker said: 'I welcome the fact that the Government has finally released this information, but question why it has taken so long. It is unacceptable that the public were treated as guinea pigs without their knowledge, and I want to be sure that the Ministry of Defence's claims that these chemicals and bacteria used were safe is true.'

The MoD report traces the history of the UK's research into germ warfare since the Second World War when Porton Down produced five million cattle cakes filled with deadly anthrax spores which would have been dropped in Germany to kill their livestock. It also gives details of the infamous anthrax experiments on Gruinard on the Scottish coast which left the island so contaminated it could not be inhabited until the late 1980s.

The report also confirms the use of anthrax and other deadly germs on tests aboard ships in the Caribbean and off the Scottish coast during the 1950s. The document states: 'Tacit approval for simulant trials where the public might be exposed was strongly influenced by defence security considerations aimed obviously at restricting public knowledge. An important corollary to this was the need to avoid public alarm and disquiet about the vulnerability of the civil population to BW [biological warfare] attack.'

Sue Ellison, spokeswoman for Porton Down, said: 'Independent reports by eminent scientists have shown there was no danger to public health from these releases which were carried out to protect the public.

'The results from these trials_ will save lives, should the country or our forces face an attack by chemical and biological weapons.'

Asked whether such tests are still being carried out, she said: 'It is not our policy to discuss ongoing research.'

Posted by Defender of Liberty at 11:51

I have read that the CIA carried out similar experiments on the west coast of the US.

Were 7/7 and 21/7 specially orchestrated to encourage greater public acceptance of more public surveillance?

The jihadists in this country don't seem to be pursuing their vendetta against infidel England with great alacrity, which is strange given the strength of their rhetoric, e.g. as in C4's The Undercover Mosque.

Are we therefore to expect another 7/7 when Brussels decides the English need another prod in the direction of full subservience to the 4th Reich?

Is that what Islam in Europe is really all about?