Melanie Phillips and the Definition of Irony 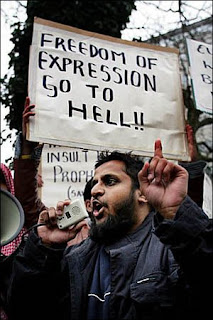 Sometimes you just have to laugh at the chutzpah of some people, Melanie Phillips foremost amongst them.

Her recent blog article here is direct proof of how irony is absent from the Zionist Network ;

Hitch up your wagons and leave.

The 7/7 bombers sought to justify their crimes in the name of the Palestinian people and the War In Iraq, both of which are related to Israel.

When blood is being split on our streets by extremists in the name of their respective alien ideologies, then the time has come for the deportations to begin.

The place for your insane racial, political, theological and territorial disputes is in the Middle East, not in Britain.

Why dont both the Zionists and Islamists just slither back to their respective deserts and leave us to get on with our lives.

Melanie Phillips can clear off to live in Israel, the state she defends and so adores, and the idiots in the BMI return to whatever nations and Sharia Law states they came from that they were so happy living in.

That way we will all be happy - as you wont be here.


The comments here are so deserving of my comment I have to oblige with a response in brackets ;

From this instructive little affair we learn, among other things, the following:

The BMI believe that inveighing against ‘the Jewish lobby’ is not antisemitic.

( From Melanies recent articles it appears that any criticism of any Zionist or Jewish groups in the UK is to be labelled as anti-semitism. It appears that no logical definition of anti-semitism exists, it is just a phrase to be throw at anyone a Zionist disagrees with )

The BMI are very sensitive indeed to what is said about them.


That is because they are accustomed to pulling the wool over the eyes of many journalists.

( Yes dear, you would know wouldnt you about the importance of pulling the wool over peoples eyes)

That is because a) some journalists are sheep. ( I couldnt agree more melanie )


b) some journalists have the bee of bigotry buzzing in their bonnet. (absolutely melanie )


It is clearly very important indeed to these Islamists not to allow the false image of moderation they have so carefully constructed for themselves to be punctured at all.


( Yes Melanie my dear, you would know how important that is wouldnt you, seeing as the fascist methodology of the UK Zionists is hidden behind a facade of facile liberalism )

It is very important indeed, therefore, that it is punctured as much as possible.


(totally agree - thats what this blog is for )

Well done, Dave T and all at Harry’s Place.

( And thanks Melanie for the laughs - who said those without a sense of irony cannot be funny ! )

Posted by Defender of Liberty at 10:17