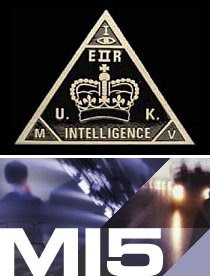 A few months ago a false e mail was sent out from one of the Smith / Blake / Ebanks / Graham cabal in my name that I wrote about here ;

It now appears that the same dirty tricks department are still trying to cause more problems.

These are the same tactics as used by various state agencies for decades. Note that in the last few days another individual within the 'nationalist movement' but who is totally unconnected to the BNP has also been attacked on the Indymedia website following the discovery of a 'letter' that was supposedly sent by him to Gerry Gable of Searchlight.

If the letter had been discovered in Gerry Gables bin then it would have made sense, but a letter supposedly sent by the person who wrote it being discovered in their own bin makes no sense at all.

It now appears that a group of idiots are indulging in sub-standard MI5 dirty tricks.

Imagine my surprise when I visited the website of a regional newspaper this morning that was running a story concerning the BNP and noticed that they had printed a 'statement' on their site which they asserted was given to them by myself -when in fact this was a complete lie and no such statement was ever written by myself or issued from me.

I have sent the newspaper the following pre-action libel notification as written below.

I have never took a libel action on as regards myself before, it will be interesting now to commence one.

I have blanked out the reports name and the name of the newspaper, as I do not want to assist in the spread of the libel, but the rest of the text is as it was sent to the editor of the newspaper. I put on notice those that repeat the libel will also be joined in the libel case ;


Re ; False Statements and Libel Action

THIS IS A FORMAL PRE-ACTION LIBEL PROTOCOL NOTICE.

In a statement, BNP legal director Lee Barnes attacked the leadership challenge as “bogus” and “illegal” and said disciplinary measures would be taken to squash the “diversionary and divisive” activity in the bud.

Mr Barnes said Mr Auty was a “decent” man who was being used as a puppet by party members who were trying to set up a rival political party.

He added: “It is a cynical attempt by our enemies to try to derail the party and to stop activities to get BNP members elected to the European parlia-ment.

“The party is on the edge of a historic victory in Europe next year and nothing must stand in the way of getting the demo-cratically elected chairman and others elected.

“Anyone who has already signed or is thinking of signing the nomination forms for Colin Auty will be suspended from party membership pend-ing an internal disciplinary tribunal where members will be tried for conspiracy and treason.

“Those found guilty will be expelled from the party and proscribed for life.”

These statements contained in the article are completely false allegations.

I have never issued any such statement either to your reporter or to any other persons at any time.

The entire contents of the above statements are false and were never written by myself , issued by myself, authored by myself or issued to anyone by myself at any time.

The above statements are libellous of myself in that ;

1) The statements are in direct breach of the BNP members rights under the BNP constitution to nominate and vote for whom they choose in an internal BNP election. They are direct threats against the party membership that seek to usurp their constitutional rights as members. To print these statements and assert that I wrote them damages both my proffessional reputation andand my impartiality as regards BNP member and are therefore libellous.

2) They make false statements as to my role in the party, in that they assert that I have said that individual party members may be suspended from membership of the party and be 'tried for conspiracy and treason'. This also further damages my proffessional reputation as no such disciplinary offences of 'treason or conspircy' exist. This damages my proffessional reputation in that this false statement would make me appear proffessionaly incompetent, in that by stating BNP members could be suspended for conspiracy or treason, would make me appear incompetent in my role as a legal adviser for the party.

3) The overall effect of the statement is to damage my reputation and proffessional competence.

I hereby wish to be provided with the wollowing information ;

A) Where did your reporter get this false 'statement' from


I hereby place you on formal notice that unless you ;

2) Print on the article upon receipt of this e mail the following statement ;

I expect the article to be removed upon receipt of this e mail and to see the apology printed within the next two hours.

Posted by Defender of Liberty at 04:38