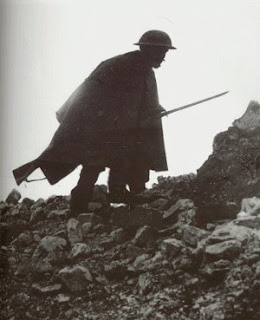 They shall not grow old as we who are left grow old.
Age shall not weary them, nor the years condemn.
At the going down of the sun and in the morning,
WE WILL REMEMBER THEM.

'FOR YOUR TOMORROW WE GAVE OUR TODAY'

The Battle of the Somme, also known as the Somme Offensive, fought from July to November 1916, was among the largest battles of the First World War. With more than 1.5 million casualties, it is also one of the bloodiest military operations recorded. The Allied forces attempted to break through the German lines along a 12-mile (19 km) front north and south of the River Somme in northern France. One purpose of the battle was to draw German forces away from the Battle of Verdun; however, by its end the losses on the Somme had exceeded those at Verdun. By the end of the war the Allied losses proved replaceable, the German losses less so.

Verdun was an icon that would affect the national consciousness of France for generations, and the Somme would have the same effect on generations of Britons. The battle is best remembered for its first day, 1 July 1916, on which the British suffered 57,470 casualties, including 19,240 dead—the bloodiest day in the history of the British Army.

Posted by Defender of Liberty at 15:58

The idea that anyone would try and plagiarise the poem by Binyon, probably the most famous poem in Britain, shows two things ;

1) A person making that statement is not British - if they were they would know that we are brought up to know and respect that poem - it is part of our cultural DNA that we hear every year as it is read out at the Cenotaph. It is the quintessential poem on the somme and WW1

2)When dealing with the Somme it is best to just quote the history -in this case wikkipedia.

The facts alone speak for themselves. No extra words are needed.

The fact that some people do not know Binyons poem merely proves the fact they are neither British in nationality or culture, that they are non-British people pretending to be British.

These pretenders need to be deported asap.

"These pretenders need to be deported asap."

Any place in particular for the likes of Tossowski and Garfield?

Somewhat OT but you'll have seen how Mel Phillips has kicked off at you on her Spectator blog.

Just for interest, I've copied below the comment I made which may or may not get published. See under ________.

Re: the line you quoted, 'For your tomorrow we gave our today,' Purnell's History of the Second World War, Volume 8, p 3502, describes the War Graves Cemetery on Garrison Hill at Kohima, Assam, India.

The article states that the cemetery contains 1,287 graves. Soon after the battle, local Naga tribesmen hauled up from a nearby quarry a block of stone that is now located in the cemetery and serves as a memorial to the British 2nd Infantry Division (all British units) that was heavily engaged in the battle. It was here in 1944 and at Imphal, where the Japanese invasion of India was decisively stopped.

The stone carries this inscription, adapted from a poem by Professor J. M. Edmonds:

When you go home,
Tell them of us and say
For their tomorrow
We gave our today

David M is absolutely right. What is the viable alternative to the BNP? No-one has yet provided a realistic answer.

And if this comment does not get published, I hope, Melanie, that you will be apprised of its contents, inasmuch as I would like to ask you, 'Would you be prepared to debate on prime-time television the proposition 'the BNP is a vile, racist Party' with Nick Griffin?'

The size of the viewing audience might rival that of the interview with the late Princess Diana conducted by Martin Bashir.

(If any network was honest enough to sceen it, an issue in itself.)

You should also remember the appalling events at the Oxford University Debate last year, with Nick Griffin present. It would be wholly disingenuous to blame the BNP for what happened.

I would add two points, as briefly as possible.

1. The idea that the BNP is only superficially 'respectable' is akin to the principle of the storied Pendle Hill witch trials by ordeal. The suspect was rolled down the hill in a barrel. If the alleged witch was killed, then justice was done. If the victim somehow survived, summary execution followed, on the basis that witchcraft was obviously at work.

That's about the level of current criticism of the BNP. Moreover, most of the article focusses on Lee Barnes, who could doubtless provide a spirited answer on his blog. But Lee Barnes is an individual. He is not the BNP and not, to my knowledge, its official spokesman (Simon Darby is the BNP Press Officer - what comments do you have about his blog, Melanie?).

2. Yesterday was July 1st. The BNP has sought on its site to commemorate that date as the first day of the Battle of the Somme (endured by men whose mainly Gentile comrades-in-arms liberated the then land of Palestine from the Turks. That fact of history should not be forgotten either).

The BNP has at least embarked on such a oommemoration. To judge by what has appeared in the MSM, the Westminster 'old gang' three-headed hydra couldn't give a collective tinker's cuss about such matters, but they are still important to many English Gentiles whose parents and grand parents fought in the World Wars.

It will come as a shock, Melanie, but I think that in days to come, you and others like you, e.g. Natasha Kaplinsky etc., will find that the BNP are among the few Gentile friends that you have on the national political/media landscape.

My comment to Mel Phillips got printed, unabridged, as far as I can see.

Hope you think it is fair, Lee, insofar as I have always regarded your comments as explicitly your own.

Just one typo - 'oomemorated' should of course be 'commemorated.'

You can read the comments here.

A few others are supportive of the BNP. Not many have been generated (or published) overall.