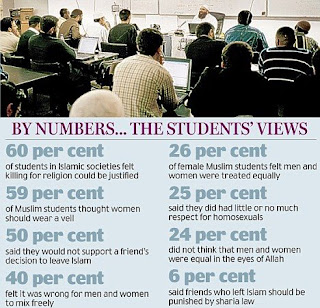 One of the things that makes me laugh about Liberals is how they ignore reality for dogma, such as when they say ' it is poverty, racism and social alienation that is driving vulnerable young muslims into terrorism'.

This of course is utter BS.

2) Islam is a religion and not a race, therefore no such as thing as 'racism' against Muslims can exist

The 7/7 bombers were all well educated, university degree, middle class scumbags in good jobs. The main 7/7 bomb leader, Siddique Khan was a teacher and the funding for the bombs came courtesy of Leeds Council who had given him a grant to set up a gym for muslim youths.

Instead he spent the grant from the council on building bombs.

The 7/7 bombings were subsidised by the cringing idiot liberals on Leeds Council.

It appears that in fact the best educated, most intelligent and well off muslims are now becoming the Islamists.

The recent doctors plot around the Glasgow car bombing where the bombers were muslim doctors shows us that it is not only the criminal muslims who reside in our streets and act as drug dealers and gangsters we have to worry about, it is also the intellectual Muslims who have become Islamists and who mainly perpetrate the Islamist bombings.


The article below reveals just how this new middle class, edu\cated elite despise us, our nation and our values as a culture and a civilisation.

It shows us that 3rd and 4th generation Muslim youth have not integrated into our country - so what makes the government think they ever will, especially when the contempt a massive majority has for this country will ensure more self segregation, more hate for the 'kuffars' and more terrorism ?


For a true taste of their hate for us watch this video here ;

Nearly one third of Muslim students believe it can be acceptable to kill in the name of religion, according to a survey published yesterday.


The findings were described by researchers at the Centre for Social Cohesion think tank, which commissioned the poll, as 'deeply alarming'.


But a prominent Muslim student group called the report 'weak and unrepresentative' and said it undermined 'positive work carried out by Islamic societies'.


The Centre for Social Cohesion, founded last year to study religion and tolerance, has drawn attention to the extremist influence of Islamic societies and study centres at British universities.

The survey was based on a YouGov poll of 1,400 students, 600 of them Muslims, at 12 universities with influential Islamic societies.


These included eight in London, among them the London School of Economics, Imperial College, and the School of Oriental and African Studies, and the universities of Birmingham, Leeds, Leicester and Manchester.


It found that a large minority of Muslim students express views that are strongly socially conservative or which suggest they are open to extremist thinking.

While 32 per cent justified killing in the name of religion if the religion was under attack, 60 per cent of students active in Islamic societies did so. Four per cent thought killing to promote religion was permissible.


More than half, 54 per cent, wanted an Islamic political party to stand up for Muslims at Westminster.


There was strong criticism of the British Government over Iraq - 66 per cent of Muslim students said they had lost respect for it.


But 30 per cent of Muslim students said their respect for British society had grown because of the negative public reaction to the Iraq war.


Report author Hannah Stuart said: 'These findings are deeply alarming. Students in higher education are the future leaders of their communities, yet significant numbers of them appear to hold beliefs which contravene liberal, democratic values.


'These results are deeply embarrassing for those who have said that there is no extremism in British universities.'


Miss Stewart also said that ministers should be wary about treating university Islamic societies as representative because their members appeared to be more extreme than other Muslim students.


The Federation of Student Islamic Societies called the survey mischievous.


Its president Faisal Hanjra said: 'This is yet another damning attack on the Muslim community by elements within the academic arena whose only purpose seems to be the undermining of sincere efforts by mainstream Muslim organisations to tackle the threat of terror which wider society faces.


'The report is methodologically weak, it is unrepresentative and above all serves only to undermine the positive work carried out by Islamic societies across the country.'


Concerns over extremism among the 90,000 Muslims studying at British universities have grown alongside the spread of radical groups, including the Hizb ut-Tahrir organisation which Tony Blair said in 2005 should be banned.


Terrorists who have passed through British universities include Kafeel Ahmed, who died after driving a burning vehicle into a Glasgow airport terminal last year, and Jawad Akbar, jailed for life in April 2007 for conspiring to attack shopping malls and nightclubs. He was said to have become involved in militancy while a student at Brunel University.

Posted by Defender of Liberty at 09:15

The braindead fuckwits of the liberal-Left idiocracy will never realise the stupidity of their ideology and their fatuous reasoning.

How can individuals who are attached to an insane ideology begin to see beyond that insanity?

Apart from the Corporations and the liberal collaborationists most of the liberal-Left will follow the rest of us into Dhimmi servility status.

When the West has become overrun by Muslims and its Western liberal consensus consumed by radical Islam overseen by a pact between radical Muslim scholars and preachers and Shariah-compliant whote liberal judges and officials, then it will be too late for the liberals to moan about radical Islam.

Message to all liberals:

"You have been warned".

Hiberniagirl links to an article in the Irish Independent
Can crescent and cross keep the faith together?

... [A] recent paper published by respected economists in Germany and based on up-to-date evidence from the UK, suggests that Muslims are an exception [to the eventually "fitting in" rule - HG].

The Institute for the Study of Labour in Bonn has recently suggested, in research entitled "Are Muslim Immigrants different in terms of Cultural Integration" (www.ideas.repec.org), that indeed Muslims are exceptional.

This territory -- as we all know -- is a minefield, so it's best to stay as close as possible to the data.

In a nutshell, Muslims integrate less and considerably more slowly than non-Muslims and a Muslim born in the UK and having spent more than 50 years there is likely to have a much stronger, separate identity than another non-Muslim immigrant who has just arrived. This includes Chinese, Caribbeans and non-Muslim Indians.

The first finding of the report, which is based on comprehensive survey data and interviews carried out across the water, found that "Muslims do not seem to assimilate with the time spent in the UK, or at least they seem to do so at a much slower rate than non-Muslims". For example, 79pc of Muslims stated that religious identity was very important to them as opposed to 42pc of non-Muslims.

Seventy per cent of Muslims said that they "would mind very much" if one of the family married a white person as opposed to 37pc of non-Muslims ...