The Tale Of The Wreckers 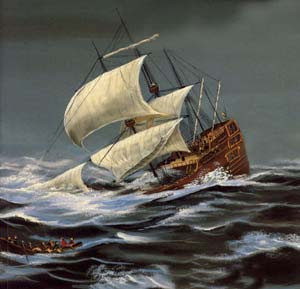 The Tale Of The Wreckers.


Where only certain death awaits,
All who walk the haunted shore,
There you will find the wreckers,
The scum of the coast, uncouth killers,
Fresh from wars, brothels and prisons,
Hands bloody with criminality,
Hearts that crave the devils gold,
Snarling sea wolves and cut throats,
Who hunt the night in cunning packs,
Their motive is only base profit,
Gleaned from easy bloody slaughter
Clutching cudgels to crush thin skulls,
Of those who are washed up alive,
Upon the harsh and unforgiving shore,
Condemning their fellow mariners,
Into becoming merely tragic flotsam,
Even women who would dare whisper,
Wasted words of tender mercy,
To empty men made into monsters,
By the dark spirits of their desires,
Conscience slips its thin leash and flees,
Screaming defiance into an empty sky,
As the cutlass stabs, slashes and kills,
All those found upon the sandy shore,
Who rose from the foaming sea spume,
Seeking asylum from the breakers,
Just to die beneath deadly blows,
Sundering their souls from broken bones,
Stealing away the last misted breath,
From the pale blue lips of the dead,
Until trembling conscience returns anew,
Barking its denials and whimpering regrets,
As the guilty man stands accused,
Before the cold black gates of death.

The lanterns of deception in their hands,
Lure the ships onto the razored reef,
Their treacherous beacons beckoning,
The boats onto the waiting rocks,
Where the wreckers mustered await,
In black cloaks and black masks,
Silent as mourners before an empty grave,
For the deed hangs heavy even before,
Its foul and bloody birth takes place,
Then into the lens she swiftly flashes,
The three masked schooner, Endeavour,
Straight from Falmouth and still at full sail,
Seeking safety from the gathering gale,
Its captain seeking the cynosure of sanctuary,
Rounds the bay and sees the lights,
Spins the wheel and takes the chance,
Then disaster ! An unseen shallow shingle spit,
And a vicious tide that runs alongside,
Drags the ship onto the hidden rocks,
Then the widowing reef rips deep,
Sharp as whetted blade into its belly,
Sudden slicing the hull, its entrails spill,
Cargo gushes from the gored wounds,
The timbers of the ship are prised apart,
Waves rush in to claim their prize,
Wresting the crew from the wreck,
Of their shattered and sinking ship,
Screams are snatched away by the wail,
Of a cruel and savage winnowing wind,
As pale petals are torn from a dying rose,
Then scattered, abandoned and forlorn,
Drowned bodies drift upon dark waters.


The captured wrecker trembles in the dock,
That no sailor ever seeks, that of captivity,
The coward that ran from his crimes,
when others chose flashing musket balls,
Their bodies buried where they fell,
without forgiveness, straight to hell,
Stumbled into rifle range of a red coat militia,
Patrolling the coves where wreckers roam,
His blade still wet with warm blood,
Found beneath an ensanguine overcoat,
Confessed under torture to all his crimes,
Weeps as the gavel gives it judgement,
For the wrecker, the radical and the criminal,
Sentenced to hang beside each other,
As fresh fruits for the fat ravens that roost
Upon the oak beams of the Bodmin turnpike,
Rotting at the end of a rope, slowly choking,
Is all the justice that they deserve,
Led in chains behind a beating drum,
Surrounded by the gloating crowds,
Up the steps and then the long drop,
Then moonlight shines upon the bodies,
As a myriad sea phantoms silently gather,
Those who sunk without gold in their pockets,
Exiles from the gloomy realm of Aegir,
Amassing beneath the groaning gallows,
Unseen by any mortal eye abroad that hour,
The ghosts gaze out from empty sockets,
Their eyes eaten by eels and crabs,
Watching the body of the wrecker,
Whose neck slow stretched until it snapped,
The rough noose twists in the same cold wind,
That drew his victims to their doom,
They seize and draw forth the screaming soul,
From the empty shell of its dead flesh,
Drag it behind them in an iron net,
Of rusting anchor chains and slave shackles,
Returning to the sea with their prize,
So as to sleep in dark abyssal depths,
Beneath crashing waves that never rest.

Labels: shipwreckers, the tale of the wreckers

Just being random...
Have you ever heard a song called Carbon by VNV Nation?