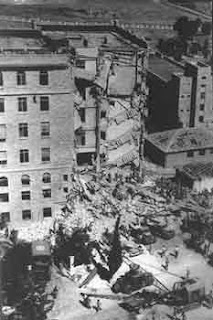 Image - The King David Hotel blown up by Zionist terrorists.

For far too long the West has embraced collective amnesia over its past.

Whilst it investigates and prosecutes those involved in crimes against humanity who fought for Germany and the Axis nations, those that lost the war, the victors of the war, the democracies of Europe have never investigated their own criminality and involvement in war crimes during the war.

This is why the new about the investigation into the war crimes of Jewish partisans in Lithuania during the war is a long overdue victory for their restless dead.

The prize of 'victors justice' is that the victor gets to write history and thereby defines who the criminals are, and who are not.

The victors seldom investigate their own crimes.

The sign of a healthy democracy is one that applies universal moral standards, not just against its enemies, but against itself.

For far too long the mythos of our moral superiority has allowed us to escape objective self scrutiny, but the time has come now for to come clean about the past.

The British government has spent 200 million pounds on investigating the events of Bloody Sunday, but it has never spent a penny investigating the crimes of Zionist terrorists against British civilians and soldiers in Palestine during and after the war.

Nor has the British government ever investigated those who were subsidised and funded by the Communist regimes of Europe, such as Arthur Scargill and also those politians who were members of those parties that supported the communist genocide, such as the Communist Party of Great Britain.

Today the Germans are not our enemy and nor are any other European nations, so therefore the time has come for our country to confront its own crimes committed during the war, and also to remedy our historical failure to investigate and prosecute the Communists who ran the death camps of the gulag archipeligo during the ear of the The Cold War.

The time has come to tell the truth about the past and to cease peddling the facile propaganda that we, and our people, never committed any crimes during the war.

The murders of German prisoners of war in prison camps under British control, the deliberate starvation of german civilians and prisoners suspected of being nazi sympathisers and the crimes commited by British troops during the war must all be investigated.

At the same time the crimes of those of all nations, including the Zionist terrorists of Irgun and the Stern Gang of Israel must be arrested for their crimes against British soldiers in Palestine.

The SS officer who ordered the execution of surrendered British soldiers during the war is as much a war criminal as the Irgun gang terrorists who planted the bomb in the King David Hotel in Palestine ( where 91 people were killed, most of them staff of the hotel or Secretariat: 28 British citizens, 41 Arabs, 17 Jews, and 5 others ) during their war against the British Empire to create Israel.

Whilst the EU is quick to pass Holocaust Denial laws and to condemn 'nazism and racism', the EU has never demanded any ivestigations into the crimes of the Soviet Union, the Zionists in Palestine or the Communists either during or after the war.

This is because many of the EU politicians, and UK ones like Jack Straw, were working for and members of the Communist Parties of Europe at that time when the death camps of the gulags were eradicating innocent people in their tens of millions.

Whilst the ovens of Auschwitz were turned into tourist attractions, Europe pretended not to notice the stench emanating from the millions of dead bodies slaughtered in death camps of the Communist regime across our continent.

Whilst the court historians in the pay of he victors constructed their propaganda narratives to peddle to the public, their pens never wrote of the crimes committed in the names of democracy, liberty and communism.

When the Berlin Wall came down and the Cold War ended, the communist killers and their accomplices were protected by the Liberals and the Far Left who had infiltrated our national political systems.

The EU is still today infested with ex-communist judges, ex-communist politicians and the technicians of the communist genocide.

There are more communist criminals in the European Parliament than in the prisons of Europe.

Their hands are still sticky with the blood of the criminal regimes they supported either politically or phsyically, yet they have never paid for their crimes.

Whilst European nations arrest, prosecute and imprison people for denying the Holocaust and arrest nazi criminals across the world, the crimes of the communists have never even been investigated.

The communists who killed ten times as many people as the Nazis did, must now face justice.

The Black Book of Communism revealed to the world the crimes of the Communists, but it was greeted with apathy.

The criminals of communism must now face justice in order that the ghosts of their victims be able to rest.

The time has come for the victors to apply the same laws to themselves that they imposed upon the losers.


1) An investigation and prosecutions of those involved in crimes against humanity and the socialist genocide of the Soviet Union and Communist China - this would include those involved in executions, the organising of artifical famines, running the gulags and those who killed innocent civilians during the Stalinist Purges and the Cultural Revolution of Chairman Mao. Investigations into the Katyn massacre and also the arrest of those that participated in and planned the invasions of Finland, Estonia, Poland etc and those involved in crushing the uprisings against Russian Soviet Union invaders such as in Hungary.

2) An investigation into the crimes of partisans and resistance fighters in all European nations during the Second World War and the arrest and prosecution of all those involved in war crimes and crimes against humanity.

4) An investigation set up to look into the murders of British soldiers in Palestine by members of the Stern Gang and Irgun with the intent to extradite and prosecute any living terrorists.

Posted by Defender of Liberty at 09:03

I propose that white nationalists set up an Indigenous Parliament (mirroring the Muslim Parliament) and campaign on issues such as this and attempt to procure funding for such an institution.

Because no other Collaborationist Institution in Britain, the EU or the UN or similar have any desire or intention of doing the kind of work that you cite above.