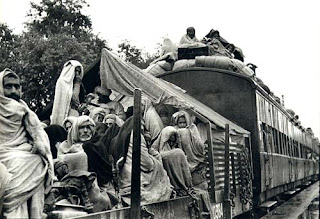 Superb article in The Telegraph ;

The lesson for those that say we can reach an accomodation with Shari Law and that we should also show tolerance to the demands of those Islamists and Isamic politicians and their spokesmen in the media that push for a role for Sharia Law in our legal, political and economic systems is that of India.

Both Gandhi and Nehru preached a message of tolerance to Islam and allowed Sharia Law to exist in the Indian legal system and said that Indian society should accomodate the demands of Islam and Sharia Law.

Gandhi said that Islamic terrorism should be met only with peaceful protest.

Whilst he pranced about India in a loin cloth preaching tolerance, the Islamist terrorists and seperatists were stocking up on ammunition and rifles.

This adoption of apathy to counter terrorism led directly to the partition of India and over a million people slaughtered in the civil war that erupted, and then meant that India was torn in two and Pakistan created.

That is the lesson that history teaches us when we adopt the liberal approach to Sharia Law and Islamic terrorism - that the road to hell is paved with good intentions.

Surrendering to Sharia Law is the surrender of our nation, democracy and liberty.

Sharia Law must be extirpated from our nation, as the moment we tolerate the intolerable in the name of tolerance we surrender the future itself.

At the same time the ideology of Liberalism that has disarmed our society must be extirpated from our political and legal systems so that we can defend our country from the Islamist threats. Also the Zionist Networks in our society that seek to undermine the political growth of the BNP must be exposed and dismantled. The Zionists attack the BNP simply because we are British Nationalists and not subservient to the interests of Israel.

Both the power and influence of the Liberals and the Zionist Networks must be removed so that we can defend our nation.


Is cosying up to Muslim extremists the best way to defeat terrorism?
By Charles Moore


The Lord Chief Justice, Lord Phillips of Worth Matravers, was nice about sharia this week. It is not "only about mandating sanctions such as stoning, flogging, the cutting off of hands and death to those who do not comply with the law", he said. And the provisions of sharia "do not include the repression of women".

Read more by Charles Moore
Lord Phillips admitted that he did not claim "special expertise" in the field, but he had been to see some sharia chaps in Oman and they had seemed very civilised.


Lord Chief Justice embracing sharia law
Anyway, his main point was that sharia might be useful here in mediating disputes about things such as marriage.

Well, it is surely true that the customary practices of various religions can be effective ways to reach agreement. Where these are compatible with wider law, as they are in the case of Jewish religious courts, they should be valued.

And it is true that sharia is not "only" about nasty punishments. But such punishments are indeed part of sharia (40 lashes for drinking alcohol is a widely accepted tariff, for example; 100 lashes for fornication), even if they are not always applied. Lord Phillips also did not mention that sharia upholds polygamy for men, prescribes a lower compensation for injury to a Muslim woman or a non-believer than to a Muslim man, and gives less value to their testimony in court. A little bit of repression of women there, Lord Phillips?

Sharia also traditionally insists on a second-class status of citizenship for Jews and Christians. All four main schools of sharia say that the penalty for apostasy - abandoning the faith - is death.

advertisementLord Phillips was speaking at the London Muslim Centre, which is part of the East London Mosque. Dr Mohammed Abdul Bari, the head of the Muslim Council of Britain, introduced him. Dr Bari said that British judges must be "sensitive to our divine laws on personal relationships and family matters". How sensitive? Up to four wives at once allowed?

He also quoted from the Koran to show the importance of justice in Islam. I looked up the two quotations. The first appears in a chapter called "Women", which says things like: "The male shall inherit twice as much as a female". The bit about judging with fairness appears just after the following: "Those that deny Our revelations will burn with fire." The second quotation, also about judging with fairness, comes in a passage about how Jews who believe the wrong things must be punished.

Of course, you could find some blood-curdling things in Jewish and Christian scriptures, but the difference for our society today is that neither Jews nor Christians are trying to establish a state based on the political implementation of their religion. Islamists are.

It is this question of context that bedevils the way Britain tries to handle the problems of Muslim extremism. I wonder, for example, how much the Lord Chief Justice knew about his venue.

The East London Mosque is considered respectable. But if you read Ed Husain's remarkable book The Islamist, about how he embraced extremism and later rejected it, you find that it was the East London Mosque that helped him learn to hate the West. On Saturday evenings, he would listen to talks at the mosque along these lines, often inspired by the dead Islamist writer Abul Alah Mawdudi. Mawdudi incited the creation of a wholly Islamic society by "organised struggle, sparing neither life nor property for this purpose". Many leading figures in the Muslim Council of Britain are admirers of Mawdudi.

There is a similar problem with the Government's efforts against terrorism. A huge programme called Contest, with a subset called Prevent, is supposed to address the hearts and minds of young Muslims. If you read its latest strategy document, you find that its definition of "shared values" has little idea of Britishness. Its section on "grievances" implies that the root causes of extremism are Britain's own racism, inequality or foreign policy. Its proposed "structures" to prevent violent extremism are a cat's cradle of interdepartmental confusion.

If you can cut through the jungle of jargon, you find "a risk-based preventing violent extremism action plan". This risk is never explained, but it seems to mean that the groups promised the money to wean the young off violent extremism will often be pretty extremist themselves.

And so it proves. The Mosques and Imams Advisory Board, which tries to keep mosques free of baddies, includes representation of the Muslim Association of Britain, which is a British arm of the Muslim Brotherhood, one of the oldest Islamist organisations in the world. To help purge violent extremism from universities, a new organisation has emerged called Campusalam. At its launch, it gave a platform to three Muslim Brotherhood men. Mawdudi supporters have also got state money to revise the teaching of Islam in British universities.

Later this month, Labour may well lose the by-election in Glasgow East to the Scottish National Party. Nearby, in Glasgow Central, the SNP candidate is Osama Saeed. Mr Saeed is now the adviser on Islamic matters for Alex Salmond, the First Minister. "Scotland can be the hub for the Muslim world," he says. As part of the Scottish Contest programme, he offers young Muslims "alternatives" to al-Qa'eda material on the internet. This is how he proposes to do it: "When people talk about deradicalisation, the last thing you want to do is say you must be against terrorism." At various times, Mr Saeed has told Western countries that they must change their foreign policy to avoid being blown up, praised "martyrdom operations" (suicide bombing) and called on Scottish Muslims to act "in defiance" of police inquiries about terrorism. He is the Scottish spokesman of the Muslim Brotherhood.

There is a theory behind all this. It is a sort of bastard child of the Northern Ireland peace process. It says that the West is "morally crippled" by its behaviour towards Muslims. It must reach out to all those Islamist extremists who are not actually personally involved in blowing anyone up and recognise, in the words of one of its proponents, Alistair Crooke, that Islamism is "founded on rehabilitated human values". Then it must empower them. Only they, backed with our money, the theory goes, will be able to deliver the terrorists.

Next week, a big exhibition at Olympia called Islam Expo, with stalls from delightful governments like Sudan and Iran, will give a platform to this grand coalition of Islamists under the banner of "Understanding Political Islam". And a minister, Shahid Malik, will appear on television for the anniversary of July 7, 2005 (when Muslim extremists murdered British people of all religions), to say that Muslims are "under siege like the Jews" under the Nazis.

So the solution to extremism is that extremists become the official representatives of Islam in this country. Islamist mosques, organisations and spokesmen will be treated as the true voice of Muslims (and woe betide those Muslims who disagree). Then we shall get a lot more sharia than Lord Phillips has bargained for.

Posted by Defender of Liberty at 07:39