The SNP and the Arab Takeover of North Sea Oil 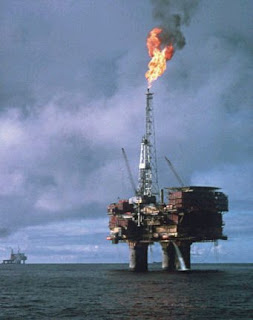 The myth of Thatcherism and the basis of Scottish Nationalism are both based on North Sea Oil.

The oil revenues from North Sea Oil was the basis of the Thatcherite economic boom of the 1980's, not her economic policies.

She in fact squandered our oil wealth and her most damning legacy was Blairism and New Labour, her 'conservative lite' clones.

Together they created the worst of all possible worlds, Thatcherism spawned our dependence on the Globalist International Corporate Fascist economic model which commands our national economy and its pimp sister Consumerism in the private sphere, whilst the Politically Correct Servile State dominates our national society in the public sphere.

The rise of the Scottish National Party is based solely on the idea that Scottish independence will lead to a more prosperous Scotland due to the SNP keeping the potential £ 750 Billion pounds worth of potential oil reserves and revenues left in the North Sea.

The only problem for the SNP and the Scottish nationalists is that the Arabic nations are going to buy up North Sea oil production plants, refining companies and will also invest in new equipment.

This means the profits from North Sea oil will go straight to the Arab nations that own the drilling companies, the pumping plants and the refinining companies.

The myth of scottish nationalism is about to be destroyed by the rise of Islamo-Capitalism.

Islamo-capitalism is the final phase of the globalised system and the Petro-Dollar Recycling System.

Islamo-Capitalism is when the rise in demand for oil and the reduction in supply means a rise in price that enriches the Arabic oil producing nations to such an extent that capitalism begins to shrink as the banks and finance companies they own begin to purchase ever more industries, corporations and companies.

In the final phase of Islam-capitalism the Marxist idea of immiseration actually occurs, in that as capital is concentrated in the hands of the arabic oil prouding nations then the more they will buy up sectors of the British aand global economy and control them.

The more the oil depletes, the richer they will get - the faster the process of Islamo-Capitalist immiseration will occur.

As the power of the arabic nations over our national economies increases, the more power they will have in relation to the imposition of a Theological Economics in the UK - where workers will have to obey Islamic customs to work for Islamic companies.

Therefore Capitalism will deliver us into the hands of the Islamists.

This is why globalism, dependence on foreign energy and the petro-dollar recycling system has to be reformed into an Green Energy Econimics system.

Abu Dhabi National Energy Co (Taqa) said it had bought northern North Sea equity interests from Shell and ExxonMobil as part of efforts to consolidate its presence in Europe.

"Today's announcement brings us one step closer to our stated strategy of building a global energy company, with an equal distribution of assets in North America, Europe and the Middle East," Taqa CEO Peter Barker-Homek said in a statement.

"We believe that the North Sea offers significant potential for companies like Taqa and we will be making a significant investment over the coming years to extend the productive life and commercial viability of our assets."

Taqa did not give financial details of the deal.

The fields produce around 40,000 barrels per day of oil equivalent.

Oil majors have been selling their assets in the mature, declining oil sector for years as they look to invest in cheaper production regions with higher potential returns.

But Taqa, which is majority owned by the Abu Dhabi government, has already amassed over $1 billion of North Sea oil and gas assets in purchases from Canada's Talisman and oil major BP in November 2006 and January 2007 respectively.

"This is further evidence of our long-term commitment to Europe and will build on our asset optimisation successes in the Netherlands and the UK to date," he said.

The UAE is the world's fifth-largest oil exporter and Taqa's expansion is part of the Gulf Arab state's drive to use record oil revenues to diversify.

The company expects to announce four new deals worth around $5 billion this year, including a joint venture with a major US utility and a windfarm in Morocco.

Taqa itself would focus instead on building its presence in the United Kingdom.

The transaction is subject to regulatory approval. It is expected to close in the fourth quarter of 2008.

Posted by Defender of Liberty at 14:29

The writer knows nothing of Scotland - FACT the SNP was created in 1934 long before oil was found, drilled and important. FACT Scotland's economy is not based on oil.
Stick to writing about things you really know something about.....that must narrow it down. Let us Scots decide for ourselves our future.

This is a most insightful article Lee.

You make what now seems to be an obvious observation but one which was not apparent at the time.

Clearly, a scarcity in oil will lead to higher oil prices and hence greater profits for the Islamic regimes which control them and therefore the more they will buy up reserves.

The West is therefore being held hostage as the oil reserves deplete and prices go up.

As in a hostage situation what do we do?

Do we send in elite units to take out the regimes responsible and secure the oil fields (but look at the collateral and the consequences for peace and stability)?

Or do we negotiate?

Do we try and give the Islamic regimes who control the oil something in return?

Our weak Western liberal democracies see this as giving into Islam and its creeping influence over its societies.

A most dangerous and cowardly game with dire consequences for the West.

We need to focus on trade and commerce and use things like specialised technology, raw materials and military hardware to bargain with them.

Furthermore, we need nationalist governments that will take over these reserves and properties from the Petro-maganates of both Arab and Russian regimes and nationalise them for the benefit of the European host country.

Lee makes a very good point about the imposition of Islamic duties and codes on workers as the power of Islamo-capitalism develops.

No doubt the liberal capitalists of the West will obey so long as they are getting profits.

A massive investment in green economics may serve to swing the balance of power away from the creeping Islamification being imposed by the petro-dollar.

Yet again, the development of capitalism to embrace Islamo-capitalism was never something foreseen by the Left's hero and prophet, Karl Marx.

I'd say let's not worry about green energy for now, it is much more important to wean ourselves off oil as it is this dependance that threatens our society by funding our enemies.

Get the mines re-opened, have the national grid powered by British coal and then let's start developing more and more energy alternatives. We have to stop funding our Islamic enemies as our top priority IMHO.

fact - the SNP want to gaion control of the oil and use that as the basis of their nationalism and economics.

fact - scotlands national income at the moment comes via the British parliament, so when the SNP get independence and leave Britain then the cheques from westminster stop.

Unless the scots can then export enough haggis or whisky (without oil revenues) to run their national economy scotland will become a european backwater, a bulgaria on europes front step.

Thanks for the update, Lee

It is interesting that Chuck Norris has an article on the WND site about the politics of hindrances to the US using its own oil resources. (The greenies over there hate him as much as the lefties here loathe Nick Griffin.)

The anti-drilling politics in the US must therefore be another force to keep the Mid East and Afghanistan as the prime sources of oil (Afghanistan as the route to the Caspian oil deposits) and the Arab* and/or Muslim nations as the global overlords of oil cartels.

*For 'Arabs,' you could probably read Illuminati, Bilderbergers etc. but that is secondary in the present context.

These political pressures also ensure the continuing military involvement of the US and UK in these areas, making for increasing international instability and risk of all-out war.

It all must serve as stronger incentives for the NWO and abandonment of sovereign nation states, i.e. let's all get together via the UN to bring in everlasting peace etc.

It is the road to tyranny.

What I'm also wondering is specifically how the destabilisation of the oil-based economies, such as the UK's, with global, rather than national ownership of oil resources, works to bring about the predicted hikes in energy prices, i.e. the projected 22% rise for gas and 17% for electricity.

Most of our power stations are not oil-based and I believe that North Sea gas and oil are essentially separate reservoirs but it all must tie in somehow.