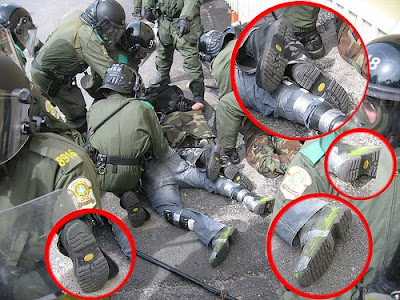 IMAGE - NOTE THE BOOTS, the police and arrested members of the 'Anarchist Black Block' have the exact same boots on. The governments and the corporations that control them, are using undercover national security police to infiltrate the demos to start violence which then allows the politicians to pass ever more laws, hire ever more police and pay the police ever more money.

The technotronic era requires the creation of a global police state, therefore in order to pass the laws neccasery to construct a global police state then 'enemies' need to be constructed whose actions can be used as a pretext for the erosion of our constitutional rights and national sovereignity.

The globalists and leftists run most of the so called 'anti-globalism protest movements'.

The opposition is part of the system.

The opposition is a safety valve.

This riot was the safety valve blowing off steam in order to allow the state to pass ever more draconian laws to restrict our rights and liberties.

The system wants the 'opposition globalists' to have the appearance of being a resistence, when in fact they resist nothing.

This is because the one thing the Globalists fear is NATIONALISM.

NATIONALISM IS THE ANTITHESIS OF GLOBALISM.

The system is collapsing.

The Technotronic Era has ushered in the Global Corporate Fascist State.

Now the Global Corporate Fascist State, or Babylon as it should be known, which is the epitome of William Blakes Ulro and Generation, the lowest stage of mans existence, during the period when the demiurge Urizen controls the planet - and transforms human existence and freedom into a cage of religions, ideologies and laws that places a cash value on anything and everything, whilst polluting and profaning the planet and corrupting innocence and souls.

The Technotronic Era is the era of Urizen.

Now Babylon sends its dark armies to sow terror and chaos as a way to ever tighten its web of laws and tyranny - the faster Babylon falls, the tighter Babylon draws the net.

Toronto is right now in the midst of a massive government / media propaganda fraud. As events unfold, it is becoming increasingly clear that the 'Black Bloc' are undercover police operatives engaged in purposeful provocations to eclipse and invalidate legitimate G20 citizen protest by starting a riot. Government agents have been caught doing this before in Canada.

At the ‘Security and Prosperity Partnership’ meeting protests at Montebello Quebec on August 20, 2007, a Quebec union leader caught and outed three masked undercover Quebec Provincial Police operatives dressed as ‘black bloc’ protestors about to start a riot by throwing rocks at the security police. See the following videos documenting this event.

The operation was exposed by the following picture of the undercover police wearing combat boots identical to those of the security police arresting them.

(Provocateurs in Montebello wear the same shoes as the Quebec policemen who arrest them!)

Awesome picture, thats what i call exposure, congratulations to the man who took it and to you lee for displaying it.
At last years RWB, I witnessed first hand at the beginning of Condor lane how the Police deliberately orchastrated what would look like violence at our event, to frighten people off from attending the following year
.
It was unbeleivable and if i was being honest mate, it was extremely intimidating to see our Police deliberately whip up a completely organised frenzy and arrests some Red scum right in front of our eyes and I do mean within 20 yards of where we were forced to park.
We had left the Hotel early with B and J, south Wales organiser and treasurer. Both our cars were stopped by the Police just as they were deliberately hurding the approx 100 scum around us. My wife was in the car and I fealt extremely threatened and that I would not be able to protect her or J + B if it got any closer.I asked the Officer in charge why are they doing what they were obviously, there was no language to what they were doing , it was absolutely obviouse.As the BBC camera crew got their film crew ready for filming, he said " I am sorry, just sit tight we wont be long, I know what we should doand what we shouldnt, but I am only receiving orders from higher Authority.
They were deliberately and stratigically creating a scene for TV, when the scum were put in order and bunched together, the Police closed in on the UAF croud and prodded them into a frenzy.
It made me feel sick and more determined to protect our decency and heritage that is ours to protect at any cost.

We are their sworn Enemy, without us, we are finished and our childrens future.

Lee why is the main site so boring compared to yours?

Nothing on the main site about the deporations plan from the Tories which has much in common with how the abbos were treated in Australia when their children were taken by the state and relocated in a planned genocide.

You covered it, the main site - zilch!

instead we get inside party back patting and politicing, the public couldnt care less for such things, what they want is infomation they can be enlightened by and can then use to enlighten others.

Come on BNP, make Lee co BNP webmaster, him and Arthur would be a great team.

put the buzz back in.

"the police and arrested members of the 'Anarchist Black Block' have the exact same boots on. The governments and the corporations that control them, are using undercover national security police to infiltrate the demos to start violence which then allows the politicians to pass ever more laws, hire ever more police and pay the police ever more money."

Unfortunatley i think the EDL have been infiltrated too !

Here's just one example of the marxist media pulling at strings for laws to be passed.

You can bet your bottom dollar that more laws which kurb freedom of speech is just around the corner!

Respected Former Italian President, Francesco Cossiga admits that these tactic are quite common with Governments.