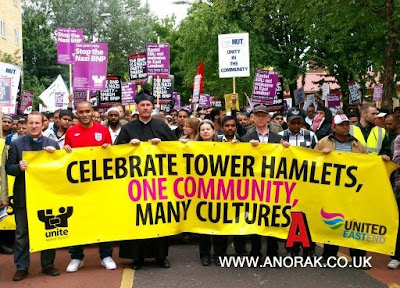 Look at these fucking idiots.

Marching alongside the Jihadists to defend the colonisation of Tower Hamlets.

Then the idiots go and attack the police and reveal what they really are - thugs.


Here we have an article on the growing influence of Islamic extremists in Tower Hamlets ;


And yet these mugs, white and black, Christian and atheist, are protecting the Islamists and hiding behind some facile ' we are one community' bullshit.

There is no community in Tower Hamlets.

There is chaos and hatred hidden beneath the surface just waiting for the right time to erupt.

These fools are traitors.

One day they will be treated as such, when the Jihadists start their street war.

On that day, the traitors will come to us for help.

And we will say to them 'fuck off and live in the nightmare you created'.

These degenerate scum have no true feeling or understanding of community. They are a mismatched freak mob who only experience a sense of community when they unite against the nationalist bogeyman - that's why they are always making demonstrations and announcements of asinine shit like "one community". They need the imaginery enemy of the nationalist in order to give their artificial "community" it's tenuous cohesion, for without an emeny they are left with the reality which is that they have nothing, no community, no sense of self.

A true community stands on it's own and does not need any external factors (either real or perceived) to justify itself.

Nationalists are the straw man, created by the self-loathing liberal scum in order to give them a reason to escape their innate misery, for without the nationalist cast as the enemy these retarded fuckers would have nothing.

No sense of Survival, please take my country, butcher us, murder and rape our women but please don't call me nasty names.

Look I'm running with you colonizers, see, I'm your friend.

David Duke on the Beauty of European Women in Art

= slow extinction of The English

The BNP should run a major article on what happens to useful idiots.

Don't take my word for it.

Therin lies another tool for the BNP, articles which show the left, their brainwashed, deluded foot soldiers what is in store for them.

It's not just nationalists that read Nationalist websites.