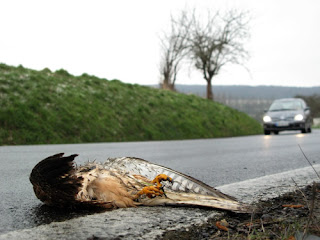 This morning I went for a walk and found a dead kestrel on the side of the road, and this is the poem I wrote to mark its passing ;


The kestrilet lay curled upon the earth, tightly in its death,
Its impudent spirit having fled the hollow husk,
Just the raw material of the young jack remained,
Mere feathers and flesh, shredded by the shot,
Spat from the barrels of a rural centurion, paid to oppress,
To hunt, trap and kill every rebel, as the punishment,
For wind hunting fops, those fat pompous pheasants,
That strut down the lanes like landlords and gentry,
In gaudy suits, collecting rent from their peasants.

For this crime the tiercel was deposed from his throne,
Cast down to the ground, exiled from the Eden of the sky,
Its body broken, no more the vessel of a wild spirit,
Which once hovered holy on the wind, loutish in its ease,
Wingtips warbling in the rapture, the hallelujah,
Of the alulas, kiting upon the very pinnacle of perfection,
Mocking the leg dragging fools who claim this world,
And call all upon it as their own, waging war upon raptors,
Who dare defy their dominion, a curse upon nature.


Now tormented in the sun by a dozen crusting flies,
That hastened to the ceremony of the putrefaction,
Buzzing with both joy and distress at its passing,
A low breeze slouching, slow as a funeral procession,
Mourns its passing with a solemn whispering,
Nuzzling at its vaned chest feathers, whimpering
At the whimple, stroking the grey hood of its head,
Seeking perhaps to awaken it once more to the world,
To string its bow with breath , fletched once more for flight.

Who but Man would dare cast down such a beauty,
Sent forth from the heavens, with such a rough curse,
To seek to still those perfect wings, now flightless at last,
Unable to scull the infinite sky, that lonely shore,
Where once it fluttered, pitched and yawed, triumphant,
Clasping at the headwind, as sure as a saint to his faith,
To swoop, stoop and fan, then plunge with deadly grace,
As a stannel stone, on that fleet and terrible fall,
From the kingdom of the cloud, where once it reigned.

Those eyes had now shut to the earth, which claimed its prize,
And held fast the fallen prince in its deadly grasp,
Just as once those binding talons had too entwined,
Around its prey, and took them before their time,
Flashing from the sun, like a spark from steel and flint,
Swift as wildfire leaping in the wind, sudden tightening,
Constricted around the kill, choking breath and cutting deep,
Then ripping at the flesh as it mantles the dead.

That razored beak of pain, it wielded with a wicked skill,
Scourges the tiring tendons, mortifying flesh and bone,
Then the feak and preen commences, the wiping away of blood,
As Pilate once sought before the crowd, but the sin remains
Only for man, for no matter how many songs this killer silenced,
Snatched mid matins at dawn and then devoured, hooked ,
In the frenzy of the yarak, perhaps a hundred choirs at least,
Have been entangled in its cast, it is already forgiven by god
Who first gave the deadly blessing upon its hunting.


None but I shall mourn its passing, the shadow that it cast,
For its empty shell lay spent upon the verge, unnoticed,
By most who walked that lane where it crashed to earth,
Then in a lightning flash of inspiration, these words composed,
Themselves in the mind of I the austringer, taking flight,
A sacred purpose was revealed, to carve its name upon a page,
To mark its passing with a poem, a eulogy to elegance,
And to lift it awing, reborn once more into eternity.

Posted by Defender of Liberty at 15:07

Magnificent bird, your poem is a fitting tribute Lee.

In light of one or two of your earlier essays, I found this and I thought you'd find it of interest: