The Top 10 Of British Horror Movies 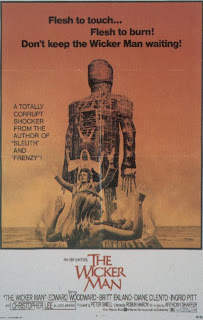 These are what I consider are the best horror films of Britain in the order they deserve to be listed as classics.

Both are classics that can be watched time after time without getting bored.

I will do another list of the best British Sci-Fi movies - but as for Number 1 on that list there an be only one - Alien, the greatest sci-fi movie ever made.


7) To The Devil A Daughter


9) An American Werewolf In London

Posted by Defender of Liberty at 09:49

Good idea Lee to have something different for a change.

Your Top 10 Horror (and perhaps later) Sci-Fi films are food for thought.

Of course,as they say, opinions are like arseholes...and others will have different ideas as to the Top 10 (like myself).

But I think few will disagree with the No 1 spot being taken by The Wicker Man - a classic of British horror movies.

Whilst you no doubt have good reason for the others over other films that have not been included I am pleased that you have included The Haunting, The Devil Rides Out and the Night of the Demon.

The last one is of particular personal significance to me as the first time I saw it (early 70s) it fritted the life out of me.

Weirdly enough, years later in 1987 I had an an almost identical experience (although thankfully not involving a demon - but similar demonic origin!) and through some weird synchronicity occurring at a place bearing the same name as the one where the Black Magician (Karswell)lived. Again, this was an entity that manifested from a Black Occult group whose work we had stumbled upon. My friend and I were absolutely terrified, having encountered this manifestation on a dark and lonely country road).

Again weirdly enough the name of the man who is terrified and killed by the demon in the opening sequences was a Professor Harrington!

You may be interested to note that Kate Bush was inspired by the Night of the Demon. The movie was about demons who hid waiting in trees - the song's opening line (in a male voice) "It's coming!It's in the trees!" is taken directly from the movie.

"You may be interested to note that Kate Bush was inspired by the Night of the Demon. The movie was about demons who hid waiting in trees - the song's opening line (in a male voice) "It's coming!It's in the trees!" is taken directly from the movie."

Kate Bush, in her earlier years especially, was very much into the paranormal and spirutual matters. Read her lyrics and you'll find many references to synchronicity and similar.

I'm surprised you haven't included Invasion of the Bodysnatchers as it is so redolent of today's narrative.

Lee what did you think of the Nicholas Cage version of The Wicker Man?