Ragnarok and the Boksta Runestone 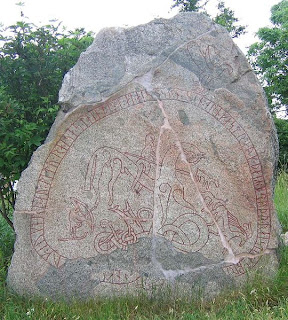 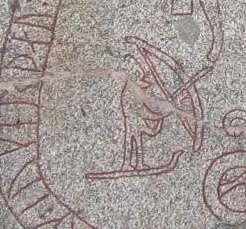 The last few days have been one incredible rush of ideas and insights ranging from a complete unlocking of ancient Norse cosmology to the ability to interpret the Bokska Runestone.

For Odinists out there what I have discovered is of immense importance - here is just a little of the insight.

The Böksta runestone is a runestone located near the farm of Böksta in Balingsta between Uppsala and Örsundsbro, Sweden. The stone is notable for its images where can be seen a man on horseback hunting a moose with two dogs and a spear. Observing the hunter is another man on skis, holding a bow and arrow, who may be Ullr, the Norse god of the hunt.

The figure of Ullr on the stone is in fact also an depiction of the Orion constellation.

The stars of Lepus beneath Orion are the skis of Ullr.

The major horse figure with a rider on the back is in fact an image comprised of Cassiopea(the horses head), Auriga (the horses back legs) and Perseus (as the horses front legs).

The female moose figurine under the head of the major horse figure is in fact formed from Andromeda.

The middle horse is in fact formed from stars in Pegasus and around it.

The head of the major running horse figure on the right of the stone with the flowing mane is in fact the hoop of Aquarius and the image on the head is Piscis Austinus.

The whole image is a star map of the stars at midnight in the middle of October.

The final proof is the image of the eagle outside the Rune insciption,as this figure is Aquila and represents the Eagle Vedfolnir who sits atop Yggdrasil.

This image unlocks for us when Ragnarok occurs - and the date is the Winter Solstice2012 at 11.11 A.M. when Odin is devoured by the Grey Wolf in the form of the star constellation The Greater Wolfs Jaws which is comprised of Andromeda, part of the Milky Way, the semicircle of stars through Pegasus to Cygnus, including Deneb Algedi.

The open jaws face the pole of the sky, the Fenris-Wolf threatening the Cosmic Axis-Yggdrasil which is TheMilky Way.

Nidhogg is the constellation of Hydra, attacking the roots of Yggdrasil which is the bottom of the Milky Way.

The date of Ragnarok is symbolic of the ending of the Great Platonic Year - and signifies the ascendence of Vidar to power.

Vidar is the avenging God, the silent warrior of the forests.

Georges Dumézil theorized that Víðarr represents a cosmic figure from an archetype derived from the Proto-Indo-Europeans.[4] Dumézil stated that he was aligned with both vertical space, due to his placement of his foot on the wolf's lower jaw and his hand on the wolf's upper jaw, and horizontal space, due to his wide step and strong shoe, and that, by the killing the wolf, Víðarr keeps the wolf from destroying the cosmos, and the cosmos can thereafter be restored after the destruction resulting from Ragnarök.

Posted by Defender of Liberty at 03:54

hi Lee,
Could you go a little further and tell us in your opinion, what the implications of Ragnarok are?
Cheers