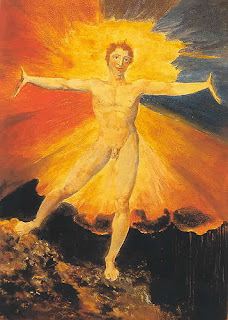 I have been reading Soren Kierkegaard and have elaborated on his idea of the various stages of Mans development, the list below is my version of this developmental stage theory which is based on Kierkegaards theories but elaborated upon and extended to the future ;


2) The Religious Stage - this was the age of monotheistic religions when tribes became settled agricultural communities and began to construct cities and preists arose to lead them alongside kings. This was the period when Man was seperated from the earth and the gods and his destiny was afixed in holy books. Man was taught that even though he was born sinful he had dominion over the earth and that his only salvation was through obedience to the books and the preists, rabbis and imams.


3) The Ethical Stage - this was a period where Man had became aware of God, but Man had no awareness of his own limits. The era of the Renaissance and Reformation and the the start of the Industrial Revolution. Once aware of God then man thought he could become God, and with the advances of science and reason thought he could replace god. Man therefore constructed ideologies such as Communism to replace God and religions. Reason and science replaced faith and religion. Man thought he could construct laws and ideals, such as universal human rights and the socialist international, which were capable of achieving by redistrbution of wealth and opportunity a universal brotherhood of man. That the rewards for obedience to these man made gods and ideals was to be found on earth and not in heaven. Parliaments and laws replaced kings and preists and the excercise of divine powers. This was the age of Political Correctness and the Liberal Consensus and the lie of salvation through utopianism that led to the Gulag Archipeligo, the concentration camps and Laogai. The ethical stage was an aspect of the Oil Age in that the energy released by oil allowed Mans internal moral landscape to grow at the same time as his wealth grew. Wealth is simply an aspect of cheap oil. In an age of cheap oil the delusions of Man grew to such a point that he thought he could control the world and nature itself.

4) The Technical Stage - this is the age we entered with the birth of computers. This is an age of technical utilitarianism where Man is obsessed not with what he is, but with what he has. The age of consumerism. The age where Political Correctness has become a fetish. Man is divided into Producers and Consumers and a human beings worth is measured only by his utility as mass animals and consumers. Only those who speak what is politically correct and who buy what they are told to buy are respected in our societies. Mans individuality has become so denuded by political correctness and consumerism that Man is no longer even free or human. Instead human beings in advanced modern socities are mere ciphers into which are decanted and inculcated via the education system and media the lies and desires that the producers demand they enslave themselves too. This is the age where the fetish of 'equality' is enforced via laws and legislation. This is the age where the best are despised and the worst worshipped. This is an age where Man is so unhappy that he seeks to return to the womb through the accumulation of possessions and the use of drugs, alcohol and prozac. Man tranquilises himself so as to escape the poison of the world around him. Mans technical genius has created labour saving devices which are simply an attempt to allow him to exist without any requirement for action and freedom from choices, the same as when he was connected to the umbilical cord in the womb which fed him and nourished him. Those that seek such goods and commodities and who drug and tranquilise themselves seek a return to the foetal stage, a period of unconscious existence. This is becuse they sense that the world is about to collapse and feel the darkness of the shadow from the future. This is the age that is about to end. This era is the final stage before the Peak Oil collapse. The final stage of consumerism in this age will be Islamo-Capitalism and the monopolisation of capitalism by the Islamic nations of the world that control the last of the oil. This will trigger economic collapse and wars across the planet.

5) The Daemonic Stage - the final stage of present modern human civilisation and the end of Homo Sapiens, the arrogant ape. The age when man will return to the level of the animal as he struggles to survive in an age red in tooth and claw. The era when Man will experience the Nemesis his own Hubris has unleashed. The age of eco-conflicts in a post-Peak Oil Age. The time when Nature will have her revenge upon Man for his crimes upon the planet and the environment. A time of mass human and animal extinctions. War, economic collapse, famine and disease. The age of the apocalypse. This is the age we are about to enter. The age when Man will return again to the level of the animals in Nature and have to battle to survive. An age where the strong will rule the weak and where the myth of equality is cast into the bonfire of the vanities. YEAR ZERO.

6) The Numinous Age - the age of an enlightened higher humanity that will come after YEAR ZERO. The age of Homo Luminous, the new humanity to come after the great collapse that will understand that Mans only salvation on this earth comes not from holy books, after death in 'heaven' or in delusions of universal brotherhood but simply from Man actively taking charge of his own human evolution, and that therefore Man must transcend Man. Homo Luminous are those humans who will survive the great collapse and who will reject all the lies of the past including all the fetishes of the ages from religion to communism to consumerism. This will be a humanity who live in harmony with Nature and who will use Creative Self Evolution to transcend humanity and by so doing transcend the trap of eternal return. Man will wage war upon the animal within Man, so as to ascend to the level of a higher humanity. For if Man remains as Man then Man is forever doomed to repeat the past in all its forms. Only by Man transcending Man through the process of Creative Self Evolution will Man transcend both the trap of eternal return and achieve his destiny. The age of the Natural Order, an age where Man lives in harmony with the planet and where the era of human quantity is replaced by an golden age of higher human quality.

Posted by Defender of Liberty at 01:15

You need to watch this Lee, he goes on a bit worth your time in the end!

Some arguments against the above!
http://skepchick.org/skepticsguide/index.php?topic=11308.0