The Shame of The Red Army 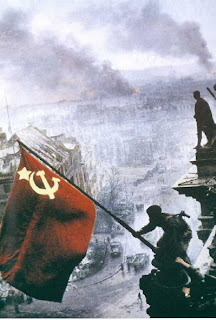 In the poem, Prussian Nights, Alexander Solzhenitsyn described what he saw in the east Prussian town of Neidenburg in 1945:


" Twenty-two Hoeringstrasse. It's not been burned, just looted, rifled. A moaning by the walls, half muffled: the mother's wounded, half alive. The little daughter's on the mattress, dead. How many have been on it? A platoon, a company perhaps? A girl's been turned into a woman, a woman turned into a corpse...

This is a poem I wrote about this scene ;


Here comes our liberation, laughs an old lady,
for she has seen it all before,
The dark shadows in her eyes, are the flickers of a memory,
looping like old film on a silver screen,
Replaying the howl of gilded lies,
loping from the crimson East, slow and cruel,
tanks beneath a burning sky,
Troops with rusted cocks and oiled rifles,
'Women are Mens prey', they say,
She curses them as they swagger past,
until one points a finger, pulls a trigger,
then she falls, stifling his shame
with a silent denunciation,
that is crushed beneath his passing wheels.

Here the hallowed agents of heroic slaughter,
Hunt down the carnal booty of flesh,
That were once human beings, wives and mothers,
foraging for the fruits of war, widows and orphans
Who fester in dark and filthy cellars,
Hiding from the beatings and kisses,
Of Soviet freedom that seeks to plant its seed,
In their nations tortured earth,
and pollute the future with their deeds.


They raise the flags above the grave,
slavering from house to house,
from room to room, from womb to womb,
A pack of Red Star wolves, savages
unleashed from the frozen steppes,
skirring the streets for prey,
gather like crows upon the corpse,
of a famished child, her body broken,
by the sheer weight of their desires,
she lays crucified upon a sodden mattress,
soiled by a dozen wilting nails,
a muffling rag still in her mouth,
ravaged then abandoned upon a madmans street.


Upon this rutted ground, rocket torn,
which old men call the past, medal poised
And bomb scarred, that fools define
As the brutal midwife of victory,
Hope lays cheated, her heart broken,
By all the horrors she has seen, sitting amidst,
The ecstacy of spent bullet cases,
and naked weeping women.

Posted by Defender of Liberty at 06:57

The fruits of a generation of Marxism.

Russian troops died in huge numbers in WW1 but, unlike Muslim Turks who massacred Armenians and militaristic Prussians who committed atrocity in Belgium, the Czar's troops were not noted for unfettered brutality against civilians.

Purnell's History of WW2 records an account by a German woman who was a young telephonist in Flensberg at the end of WW2 - when East Germans were fleeing in boatloads across the Baltic to escape the Russions.

Her superior introduced her to a British Army officer who had responsibility for overseeing the Post Office and its exchange for the occupation forces.

He smiled at the then young women and she thought, "Thank God, he is human."

There are benefits from our traditional Judeao-Christian belief system.

It could be noted that with the fall of CommUNIsm in about 1989, the former USSR devolved largely into a Russian Mafia-ridden mess.

When the current Soviet-style excuse for a government collapses in this country, I believe that the BNP-led reconstruction of Britain will yield a different result, for the same reasons.

Very good poem, albeit very disturbing. Reminds us of what we're fighting for.

Here's a little tribute to communism.

"There are benefits from our traditional Judeao-Christian belief system".

Despite the failings of Judeo-Christianity in the West and the fact that it funadentally an alien religion that is divorced from the essential spiritual consciousness of the northern Europeans, the fact is that Judeo-Christianity was the grease that oiled the wheels of Western civilisation.

It remains the faith of millions and as such must be respected.

It is the foundation for much of our laws, social mores, philosohy, conduct and social system.

The Judeo-Christian tradition and standards of behaviour have ensured that the West has remained civilised and conducted itself with regards to certain standards of humanitarian levels and accepted that men have rights and the right to life (although the mass slaughter in WW1 and WW2 and the Holocaust are examples where that superficial code within Western humanity can be broken by deeper forces).

Unlike the mechanistic and soulless machines of Marxism that uses individuals as meat and discards their bodies when finished as they do not accept that man is a spiritual entity too.

Agreed. This is key. Identify those forces and you have the answer to the persistent hostility directed towards the BNP.

Thanks for pointing that out Alanorei.

I was referring more to the deep unconscious forces that exist in the reptilian parts of the lower brain of man. Where primitive, instinctual and reflexive responses occur.

Man is still essntially an animal though possessing of a higher spiritual essence.

It is the conflict between the lower animal emotional-instinctive conditioning and the higher creative and morally superior consciousness of mankind that is responsible for the dark and light sides of man's existence.

Although, for instance, Germany in the 30s was highly cultured and technologically advanced it was stil possivle for political forces to expose and unleash powerful primaeval forces that had been repressed within the Germanic mind.

I agree as you indicate these depths of the human psyche can be harnessed for great evil.

Germany is a case in point, also as you indicate. She was the heart of the Protestant Reformation under Luther in the 16th century.

But 400 years later she produced a regime that inflicted the death camps, in spite of being, I understand, 98% literate as a nation.

I believe that the Party is now being increasingly subjected to dark forces because the NWO 'movers and shakers' in this country (not necessarily the elected representatives in Westminster) envisage the Party as the greatest secular threat to the break-up of the British sovereign nation state and the absorption of it into a one-world government, as projected by Arnold Toynbee back in the 1930s - See Britain Held Hostage, by Lindsay Jenkins.

The recent attempted break-in to Richard Barnbrook's office in London is an example, a blatant criminal act but I think the authorities will do as little as possible about it.

(The enemy are all the more panicky because the attempted coup last December signally failed. The 5th column must now pull out all stops, even to the extent of openly breaking the law, with the connivance of those charged with the responsibility of law enforcement.)