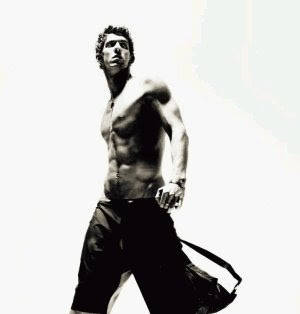 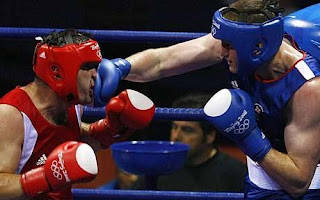 In a report on the greatest Olympians the BBC had to peddle the usual suspects, all non-whites, as the greatest olympians.

This was because people were saying that Michael Phelps was the greatest Olympian of all time.

He has triumphed not just in his sport, but because he is in fact classified as suffering from a disability, ADHD.

This makes his victory all the more majestic.

The fact he is white, and whites excel in the sport, is just the icing on the cake.

Just as being black and proud of your race is acceptable, it is just as acceptable to be proud of the achievements of white sports people.

The only reason the leftys are whining is because swimming has no blacks in it to turn into the latest icon to peddle multi-culturalism to the masses.


The picture above should be entitled 'Get Hold Of That' - just look at that DavidPrice punch impacting upon Islams boat race and hooter.

The 6ft 8in British team captain gave his team a massive boost by overcoming a cautious start to send the Russian to the canvas during a sensational second round.

Timurziev was forced to take a standing count after being floored by a hook as he trundled forward in the opening seconds and moments later another David Price attack ending in a chopping right hand put him down again.

Allthough Timurziev hauled himself upright and indicated his intention to continue, Chinese referee Wang Jiabo called a halt after 31 seconds of the session. It was a magnificent upset victory for Price who in the past has shown a lack of self-belief.

Posted by Defender of Liberty at 10:24

In a report on the greatest Olympians the BBC had to peddle the usual suspects, all non-whites, as the greatest olympians--DOL

Does the BBC highlight the achievements of blacks in fields other than sports? If yes, is the coverage balanced between sports and let's say the medical field?

The only reason the leftys are whining is because swimming has no blacks in it to turn into the latest icon to peddle multi-culturalism to the masses.--DOL

Now that was really funny. But anyway, Michael Phelps is all over the news here in the States. In fact, I rarely hear about any of the black athletes. England must love black people I guess.