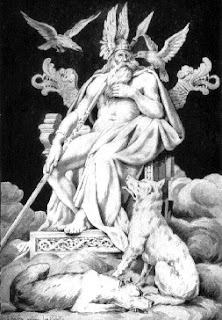 One of the myths surrounding the God Odin is that he was hanged from neck from the World Tree Yggdrasil. He wasnt as a simple reading of the Runatal will show.

Rúnatal or Óðins Rune Song (Rúnatáls-tháttr-Óðins) is a section of the Hávamál where Odin reveals the origins of the runes, or of secret knowledge. It runs from Stanzas' 138 through to 165.

In section 138, Odin describes his self-sacrifice (to himself):

I know that I hung on a windy tree
nine long nights,
wounded with a spear, dedicated to Odin,
myself to myself,
on that tree of which no man knows
from where its roots run.


Note that the verse says ' I hung' not that he was hanged.

In fact Odin was crucified, he was pierced through by his spear Gungnir represented by the Gar Rune of the Anglo-Saxon - Northumbrian Futhork, and impaled upon Yggdrasil.

Gar means spear, referring to Odin's spear, though this is actually a word play or "kenning" on the World Tree, Yggdrasil.

Gar is therefore symbolising the spear as being / becoming one of the branches of the world tree on which Odin hung, speared and bleeding, until he found the Runes.

This symbolises Odins union with the tree.


In section 5 of Skáldskaparmál, it reveals that the spear was fashioned by the dwarves known as the Sons of Ivaldi under the mastery of the blacksmith dwarf Dvalin. The spear was obtained from the dwarves by Loki, the results of a scheme he concocted as a partial reparation for his cutting of Sif's hair. The spear is described as having the ability to always pierce cleanly through its target and as never stopping during its thrust.

The followers of Odin include those who were hung from the gallows, but this has no bearing on the fact that Odin himself was crucified.

This ritual crucifixion is also linked symbolically with the crucifixion of the Druid God Esus.

Victims offered to Esus would be impaled to trees with arrows and ritually wounded with a spear. Omens were read based on the pattern of the blood spurting out.

Esus, is an a-grade u-stem based on a PIE root *eis- "passion/fury" (making the name semantically the same as Germanic Wotanaz "Furious/Inspired God"). Alternately it may be from PIE *ais- (2) "honor/respect".

Crucifixion is one of the defining symbols of the great gods of history.

For more information on the 16 crucified gods read here ;


Note also the words of the Gnostic Apocalypse of Peter where it states that Christwas crucified not to cross but to a TREE - this is because the Gnostic texts talk about a Docetism Christos who is of the spirit and not just the flesh ;

In this story of the Crucifixion, the Christos is crucified to a tree and not a cross - as this symbolises spiritual rebirth in life as the inner Christos is of the spirit and therefore imperishable.

This belief is most commonly attributed to the Gnostics, many of whom believed that matter was evil, and as a result God would not take on a material body. This statement is rooted in the idea that a divine spark is imprisoned within the material body, and that the material body is in itself an obstacle, deliberately created by an evil, lesser god (the demiurge) to prevent man from seeing his divine origin.

Docetism can be further explained as the view that since the human body is temporary and the spirit is eternal, the body of Jesus must have been an illusion and, likewise, his crucifixion. Even so, saying that the human body is temporary has a tendency to undercut the importance of the belief in resurrection of the dead and the goodness of created matter, and is in opposition to this orthodox view. Docetism was rejected by the ecumenical councils and mainstream Christianity, and largely died out during the first millennium A.D. Gnostic movements that survived past that time, such as Catharism, incorporated docetism into their beliefs, but such movements were destroyed by the Albigensian Crusade (1209-1229).


The text takes gnostic interpretations of the crucifixion to the extreme, picturing Jesus as laughing and warning against people who cleave to the name of a dead man, thinking they shall become pure.

The text disagrees with the Orthodox Church's doctrine of Salvation. According to this text:

"He whom you saw on the tree, glad and laughing, this is the living Jesus. But this one into whose hands and feet they drive the nails is his fleshly part, which is the substitute being put to shame, the one who came into being in his likeness. But look at him and me."

Posted by Defender of Liberty at 11:45