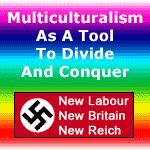 The problem with such surveys like this is that many of the whites they ask these questions to are old and retired and therefore live in a self imposed reality bubble where they never experience the real world, whilst many other whites are middle class proffessionals in jobs for life where they are never in contact with the social reality of those in the job market and many other whites are still at school or university.

The real figures would be much higher if just those who are of working age were asked.

The important part of the is here " The research found that overall, whites are more likely than those from ethnic minorities to believe that racial prejudice and discrimination is getting worse.


Fifty-eight per cent said they believe there was more racial prejudice now than five years ago, compared to 44 per cent who were interviewed in
2001.

The figure for ethnic minority communities has hardly changed, at 32 per cent. "

What this states is that 58 % of white people in the UK feel that the country has got more racist TOWARDS THEM.

This is confirmed by the fact that the figure for ethnics asked the same question stayed the exact same at 32 %.

This is an incredible revelation - it means that 58 % of the white population means they believe that the UK has become a racist country against whites.

This is a devastating indictment of the Labour Party time in power - they have in effect 'racialised' the white population by imposing blatantly racist policies against them - and the demented harridan Harriet Harman is about to pass more laws to consolidate and extend anti-white racism.

Imagine if a survey revealed that 58 % of Jews in the UK believed that the country had got more anti-semitic, there would be an uproar.

But because the people who experience this racism are the white ethnic majority, and they exist in a multi-cultural system based on the Tyranny Of The Minorities where only the interests and demands of ethnic minorities are regarded as important, then nothing will be done to address this issue.

It will not be debated in Parliament, no ministers will go on the media and demand an end to this racism - even the cringing tories send their ethnic minority spokeswoman to talk about the issue in a way that manages to avoid directly mentioning anything at all about the plight of whites with more PC pap that could have been vomited out by a Labour Party spokesman.

This article has completely validated everything the BNP have been saying for decades and confirmed that unless whites have an explicit political voice in the multi-cultural system then our interests as a community are minimised, silenced and denuded year after year.

The UK has become an Anti-White Racist State - dont say we didnt you warn you.


One third of whites claim they are victims of racism

Comments (28) Add to My Stories

A growing number of white people believe they are the victims of racial prejudice in Britain, official research has found.

Almost one in three - 29 per cent - said they now expected to be treated worse than other races by key public services.


And the number of whites claiming to have been refused a job or discriminated against at work for reasons of race has doubled in the last five years, according to the Government study.


Seven per cent believed they had failed to win a promotion because of their race, up from three per cent in 2003. Three per cent alleged they had been turned down for a job for the same reason, up from one per cent.


In addition, the study reveals that most ethnic minorities living in Britain feel stronger ties to the nation than whites.


One in six white Britons feel only a slight sense of belonging to the nation.

Whites also now feel less able than other ethnic groups to influence decisions affecting their local area and the country as a whole.

For example, 41 per cent of black African, 36 per cent of Bangladeshi and 35 per cent of Indian people feel they have a say in decisions affecting Britain, compared to 19 per cent of white people. The survey of 15,000 people - ordered by Communities Secretary Hazel Blears - is likely to prompt a fierce debate about the disillusionment of the white majority.


The Tories blame Labour's race relations strategy. Tory communities spokesman Baroness Warsi said: 'It's no wonder more people feel there is an increase in racism when Labour's multicultural industry is forever talking up what divides us rather than concentrating on what unites us.'


The research found that overall, whites are more likely than those from ethnic minorities to believe that racial prejudice and discrimination is getting worse.


Fifty-eight per cent said they believe there was more racial prejudice now than five years ago, compared to 44 per cent who were interviewed in
2001.

The figure for ethnic minority communities has hardly changed, at 32 per cent.


The survey found that 29 per cent of white people expect to be treated worse than other groups by at least one of eight public services, including the police, prisons, courts, Crown Prosecution service, probation service, local housing organisations, schools or GPs.


Whites identified council housing departments or housing associations as the most likely to discriminate against them.


The proportion of members of ethnic minority groups who expected to face discrimination from one of the eight bodies fell from 38 per cent in 2001 to 34 per cent. But it remains higher than for white people in many categories, particularly the police.


Tory MP Greg Hands, a member of the Commons communities and local government select committee, said: 'It's a dangerous phenomenon if any part of the population feels they are being systematically discriminated against.'

Posted by Defender of Liberty at 01:23