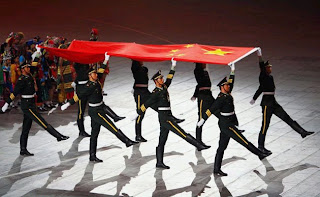 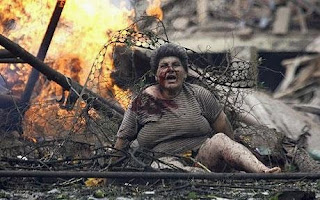 Image - woman trapped in rubble after Russian bombing in Georgia


Did you watch live the lighting of the flame,
As the war games began but felt no shame,
For applauding the Romans at the crucifixion,
The horror commencing, tank tracks clanking,
Swallowing the lie that keeps the regime in power,
With pomp and propaganda, the terrible beauty,
Of the spectacle of war, as nations clash,
The sound of drums like artillery shells, raining down,
Upon the remains of another beautiful burning town,
You adore your wars on the field of gold,
In the tangled steel of the dragons nest,
As pretty missiles fall sparkling on Tskhinvali,
Deadly fireworks burst into life over Bejing,
You are blinded by the light of the darkest lie,
As the dying tigers are burning bright,
Beside the bombed bridges of the future,
Death stalks the flanks of Europe, ever closer,
The war machines are unleashed for oil,
Now night draws down upon both lands, a veil
Uniting the deceptions of our perceptions,
You join the massed ranks of the state parade,
Where every clap, every cheer, every lap,
Is another bullet to the back of a neck,
For every eye turned away from the crime,
Is an individual act of collaboration,
Gold, Silver and Bronze, every action
Is particiption in the mechanism of dictatorship,
For you who carry your flags, walk beside ghosts,
As this savage flower blooms upon a grave,
Its roots lay buried in forgotten bones,
The remains of the enemies of the state,
Babes in their cradles and old men who muttered,
Devoured by a red dragon with golden talons,
That knocks on the door after dark,
Gathering its victims in famine carts,
For apathy is the tyrants greatest weapon,
Every crime is forgiven and forgotten,
As long as you always keep us entertained,
Whilst your bullets and bombs, kill and maim.

Posted by Defender of Liberty at 02:57