Two stories that prove the country has gone mad 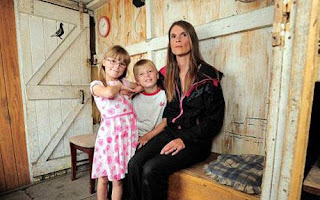 Debbie Galloway, from Hartlepool, with her children Tom and Sophie, who is having to live in an allotment shed after she couldn't keep up mortgage repayments on her home.


If you want proof this country is a sick joke then read the two stories below.

Whilst prisoners have gyms, libraries, access to free food and run the prisons - British families are living in cars on the streets and in sheds because scum capitalist bankers have made millions out of the credit crunch.

This country is a sick joke.

It is time that people got mad - instead they act like lemmings and keep voting for the idiots that perpetually betray them.

The British people have been turned into sheeple.

Prison guards have been told to issue convicts with free condoms and call them by their first names, for fear of being 'too harsh’ on inmates.

A report by Her Majesty’s Inspector of Prisons also said prisoners at Bullingdon Prison in Oxfordshire should be served their evening meals later in the day, to stop them feeling hungry overnight.


The Prison Officers’ Association reacted angrily to the recommendations, drawn up after an inspection in January.


Glynn Travis, spokesman for the POA said: “I don’t think we can keep control of violent prisoners by calling them by their first name.”


Among 200 recommendations made to improve the running of the prison, was the suggestion that complaints about prison food should be dealt with more quickly.


The report added that inmates should be allowed to choose whether they are addressed by their first name, or surname and title.


It recommended that more prisoners should be given gym inductions, and suggested inmates be given more time outside their cells, and have anonymous access to condoms.


Among other issues raised by inmates were cramped conditions in shared cells, mundane training and lack of space in the library.


Mr Travis added: “Rather than criticise officers for their use of force, the inspectors should look at the underlying problems


“There is more and more violence at prisons because of a lack of staff. There are major problems with overcrowding and prisoners who shouldn’t be there.”


Bullingdon’s governor, Phil Taylor, denied his prison was too tough on inmates.


He said: “Sanctions are in place for those prisoners who break rules - I don’t think we’re too hard on them. I think we have a balanced approach, which helps protect the public and reduces reoffending.


“I don’t believe our prison is a soft option either. I have seen draconian prisons and very liberal prisons and we’re somewhere in the middle. We welcome the inspectors’ report.”

Couple moved to shed after home was repossessed
A couple who lost their home after failing to keep up mortgage payments went to live in a shed on an allotment.

Philip and Debbie Galloway moved to an allotment while their six children, aged between four and 14, stayed with relatives.

The couple decided to live in a shed rather than accept any of the "run-down" houses offered to them by their council.

They had previously lived in their semi-detached home for 13 years until it was repossessed in early June.

Mrs Galloway, 31, of Hartlepool, Co Durham claims all the houses that were offered were run down and had defects such as no running water, a hole in the kitchen floor and tiles falling off the wall.

"The allotment is cleaner than half the houses they have sent us to look at," she said.

Mr and Mrs Galloway spent five weeks at a relative's allotment until the council offered them temporary accommodation at the Stafford House Hotel, Seaton Carew. However, this is no longer available.

Mrs Galloway, who is on income support, and Mr Galloway, 42, who receives incapacity benefit and disability living allowance for a lung condition, plan to go back to the Nicholson's Field allotment site, in the West View area of Hartlepool.

A spokesman for Hartlepool Borough Council said: "Given that she has been classified as intentionally homeless, social housing is not a realistic option.

"The only other option is to try to secure accommodation for the family in the private rented sector.

"Due to the number of dependants involved in this matter, we have done over and above what is required of us by law.

"Given the efforts that have been made, we feel there is little else that we can do."

Posted by Defender of Liberty at 02:06

"It is time that people got mad - instead they act like lemmings and keep voting for the idiots that perpetually betray them."

The point is that the supine and weak people of this country have lost the plot and have no guts. They just don't have the bottle - just like their so-called weak and ineffectual leaders who have sold their souls and their own people to money and self-interest.

The noses of the British people have to be rubbed into the mud for a good many years yet before they begin to wake up from their TV-induced soporific reality and consumer dreams and start getting angry with the System.

I have no respect for a people who prefer to sit on their arses and complain and yet do NOTHING about their situation, preferring to think about only themselves.

Let them taste shit first and maybe they will then begin to revolt and to start asking the right questions of the System.

Until then fuck 'em. You can't be soft and naive and wear pink-tinted spectacles just to appear good when you're dealing with the fundamentals of this dire situation.

You have to understand that people are essentially semi-automatons and are not yet switched on. Until they get to the point when they stop voting for the same people (Lib/Lab/Con) and start doing something about their situation they can rot as far as I'm concerned.

Our job is to inform, educate, radicalise and motivate. The rest of it is entirely down to CHOICE.