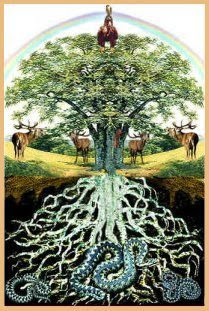 One of the great mysteries of Odinism is the location and identity of Yggrdasill, the Tree Of Life.

The Milky Way is the World Tree Yggdrasill.

The base of the world tree is represented by Lokis Brand, and this comprises the stars Sirius and Canis Major as seen due South on the Winter Solstice.

Lokis Brand signifies the above ground point on the horizon where directly below Loki is held in entrails, bound in Hel.

This is the base of the World Tree Milky Way on the Southern Horizon which stretches to the top of Yggdrasill in the due North.

On Midnight at the Winter Solstice, December 21st, the base of Yggdrasill is due South.

At the base of Yggdrasill is the constellation of Hydra, which is the dragon Nidhogg gnawing at the roots of Yggdrasill.

Then on the lower level of the Milky Way - World Tree we have Ullr, the Winter God, which is the constellation of Orion who replaces Odin during the Winter when Odin, Cygnus, is at its lowest point due North.

Odin is the constellation of Cygnus.

Cygnus is the celestial representation of Odin being crucified upon the World Tree - Milky Way.

Above Cygnus when seen from the South at Midnight on the Summer Solstice, June 21st, is Aquila, which is the hawk Vedrfolnir, and above the hawk the Golden Eagle Vidopner which is in Saggitarius.

Heidrun the goat atop Yggdrasill is Antares.

Posted by Defender of Liberty at 11:55

Thanks for clearing that up. It all makes sense to me now.

Great Blog. You just got a new reader. Keep up the good work, maybe this will inspire me to do something with mine. Bye.

Interesting ideas but where's the evidence in the sources for this. Let's take the idea for Cygnus as Odin where is the evidence..... Are you using books or is this insight the result of some kind of deep level intuition/meditation - no that that makes it less valuable mind you.

I found this very informative video which deals with the new world order in a very easy way. This will also take care of the Islamic problem once we have our governments back. If you also find it interesting could you find to to blogg it and spread the word.

How to beat the nwo