New British Fascism - The Rise of the British National party 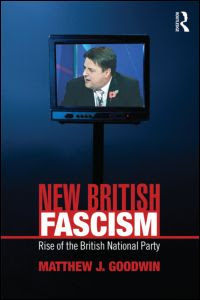 I havent read the book New British Fascism - the Rise of the British National Party by Matthew Goodwin, though I will make an effort to do so - though most such books about the BNP are trite, boring and tedious to read.

Only those on the inside, know the truth about the BNP and how it is run.

I did read Eddy Butlers critique of the book on his blog though, and to be frank it was only partly correct.

There are primarily two reasons why the BNP has not become a mainstream organisation, and the first of these reasons is Nick Griffin himself.

Griffins methodology has always been to purge those more talented from him from the party. Anyone with any skills, talents or ability within the party are either expelled, persecuted until they leave by Griffin or hounded by his thugs until they walk away.

I realised this years ago.

Hence why I never rejoined the party after 2001.

As a British Nationalist my loyalty was not to Griffin but to the principles of British Nationalism and the party and its members - but in order to ensure that those principles were protected the only way to do so was to ensure I was never seen as a threat by Griffin - hence I did not rejoin the party, did not stand for any senior leadership positions and by so doing thereby defused Griffins paranoia.

That is also why for the past decade prior to my leaving my role as legal officer, I was in effect virtually running the BNP for Griffin.

Most of the new ideas, innovations and successes we had as a political party were based on my ideas being spoon fed to Griffin and him then applying them to the party via his dictatorial powers.

I sat on the party Steering Group with Griffin and Simon Darby and also sat on the AC.

I was on the phone to Griffin up to five times a day - in fact virtually all the important decisions in the party were based on my input.

It was not until Jim Dowson joined the party and turned Griffins emphasis from politics to making money that my influence waned over Griffin.

As soon as Dowson seduced and grooomed Griffin and led him by his porcine greedy nose with the promise of loot and lucre, Griffin lost interest in running the party as a POLITICAL PARTY and instead he began to run it as a PONZI SCHEME.

Hence why the party began to collapse from that point.

Griffin is in fact inept.

The image of him being competent is simply propaganda peddled by the party to its members, who are stupid enough to believe it.

Griffin took the credit though.

In fact most of my time in the BNP was spent stopping Griffin from making cock ups that would make a village idiot blush with shame.

For instance the classic case of the missing Fifty Grand.

When John Tyndall died Griffin believed that fifty thousand pounds in John Tyndalls bank account was money owed to the party, as Tyndall had been left the money in a will for it to be used for the benefit of the BNP.

With the money now in the hands of Joihn Tyndalls wife, Griffin wanted to force her to hand the money over to him.

One afternoon I got a phone call from a certain individual (you know who you are) who said to me ' Lee, me and Nick have been talking and we have a great idea about the money'.

Instantly the radar lit up - when Griffin had a good idea it was usually on a par with juggling hand grenades with the pins pulled out.

'Ok whats the idea' I asked.

' Nick and I think we should contact Valerie Tyndall and say that neither of us should keep the money. Instead we should donate the whole fifty thousand pounds to the legal fund for Ernst Zundel'.

For those who dont know, Ernst Zundel was at that time being prosecuted for Holocaust Denial and Holocaust Revisionism.

After telling the person ever so politely that it was the most stupid idea in political history and that no, we were not going to donate fifty grand to a holocaust deniers legal fund and that instead we were going to allow Valerie Tyndall to keep the money as the negative publicity generated from taking her to court would outweigh any financial benefit from obtaining the money from her let alone giving it to Ernst Zundel, I then had to inform Griffin of the same thing.

Thats not the only example of Griffins utter stupidity.

The 'Gurkhas are mercenaries', the ' lets give everyone a machine gun ', the Question Time farrago and countless others were Griffins all messes I had to try and clean up.

It was a dirty messy job, but seeing as most other people were too busy brownosing Griffin and would never say boo to the Fuhrer, it was down to me to try and constrain his imbecility and meglomania and put the party interests first.

The second reason why the BNP did not ever go mainstream was due to the fact that the BNP is not a political party motivated by practical political realities and objectives.

In fact the BNP is a cult of personality, not a political party.

Woe betide anyone whose public profile gets too high and their and their comptence as a politicians too highly regarded - they are gone.

Alby Walker was the perfect example of this.

The decision to replace Alby Walker with Simon Darby as the candidate in Stoke was simply to ensure that Alby Walker would be forced to leave the party - as he had become too popular with the activists, too competent in his role and too well respected by the public.

He threatened Griffins cult of personality and also his image.

You see Griffin can only appear to be a winner when he surrounds himself with losers.

That way the 'winner' is obvious.

Griffin cannot stand anyone ever being revealed as a potentially better leader than him, as by doing so Griffin faces being removed as the leader.

Hence he surrounds himself with halfwits, crawlers, lick spittles and non-party members like myself and Pat Harrington who cannot threaten his position in the party.

People say ' why is Harrington second in command in the BNP', well its because he is not a member of the BNP and hence cannot stand for leadership of the party and against Griffin.

Hence he was given power over those mugs that are members and could threaten Griffin.

The fact that at one time I was described as 'Griffins Rasputin' was in fact correct ( and funny ).

After I was no longer Griffins Rasputin it was Jim Dowson, who was also never a member of the party.

Now Harrington is his Rasputin, simply as Pat cannot threaten his position as leader and because Pat is one of the handful of competent people in the BNP.

Griffin runs the BNP as a cult of personality as the losers in the BNP allow him to do so.

The Griffinite window lickers are not interested in nationalism, nationalist principles, taking power, financial transparency, accountability, internal democracy and all those other piffling things like those - all they care about is being a Griffinite arse licking lick spittle.

Thats the reality of the BNP.

Its run by Griffin simply for the benefit of Griffin.

IT IS NOT A POLITICAL PARTY.

Those authors, critics and others who pontificate about the BNP and its ideology know nothing about the reality of the power structure at the top of the BNP.

For a decade I was one of the three people that ran the BNP.

In fact I can honestly say that it was my advice that reined in Griffin long enough for the BNP to go from the marginalised sect it was when I joined the party to its entrance into the mainstream.

It was only with the arrival of the crook Jim Dowson, and his seduction of Griffin with the promise of unlimited riches derived from defrauding the members and his takeover as the primary adviser of Griffin, that the BNP began its collapse into the pathetic joke it is today.

But thats another article for another day.

So Eddy is wrong to say that it is just the lack of middle class people in the party that has caused the crisis in the BNP.

He is part right, as those people have the skills and talents the party needed to grow into the mainstream.

The primary issue as Butler will no doubt confirm - is that Griffin purged the talent from the party and ensured that moderate people were repulsed by the party by his deliberate comments to the media, especially during election times, that ensured the party remained small and Griffin its tin pot fuhrer in perpetuity.

Those endless gaffes Griffin in the media made were not accidents, they were designed to ensure the party remained a small and powerless cult on the margins of society as by so doing it repulsed real talent from joining - as that way the Ant Emperor could remain forever the Ant Emperor of his BNP Ant Empire.

All Hail the Ant Emperor Griffin !

Posted by Defender of Liberty at 05:53

"For the love of money is the root of all evil: which while some coveted after, they have erred from the faith, and pierced themselves through with many sorrows" 1 Timothy 6:10.

In the brief contacts I had with Nick Griffin and Robert West a couple of years back, some time before Dowson became the Finance Officer, I had thought they were both inclining towards the 1611 Holy Bible as a sound ideological basis for the Party.

It has been said in relation to the KJB that "Light rejected becomes lightning."

That is definitely not wrong.

That Book will shaft you every time.

Brilliant article. We were having big problems with Griffin in Epping Forest back in 2002.
It became Epping Forest Branch v Griffin instead of lets build up a massive Nationalist party.
We could have done so much more.

From London to The Shires to Britain to Europe to The World.
YOUR RACE IS YOUR RELIGION The most powerful religio-political movement for more than 3500 years, possibly.


Will you join us?