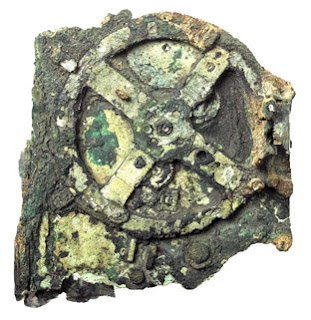 Two wolves were sat upon the East, Skoll and Hati,
The sun dogs of death waiting for Ragnarok,
When their muzzles will maw the sky jewel,
And gorge on its glittering gold blood,
Sup the slaughter dew of flame and fire,
Ushering in the Fimbul winter, the feast of ravens.
Then the sky itself became a revelation,
I saw the cogs and gears of a Greek machine,
Which are the inner workings of eternity,
The sun wheel circling as a flywheel,
Within its mighty celestial mechanism,
The ticking of time marked by moon and stars,
Upon its precious face of iron and pearl,
As are Nemea, Isthmia, Pythia and Olympia,
Etched upon the Olympiad dials of the Antikythera machine,
The orbit of planets, its springs and counter balance,
The beauty of its design centred around the sun.
For a moment it was as if the universe were opened,
And all its intricacy revealed, as a pocket watch
When opened reveals the movements of time itself,
The sky as an immense computer, its motion perfect,
Sweeping into infinity until the clouds shifted,
and its silver clock case closed in on itself,
Hiding its beauty beneath a pale blue veil of sky.

Posted by Defender of Liberty at 12:13

A most unusual subject brough to life through poetry.

The Antikythera machine has long bene forgotten amongst the West and deserves a wider audience.

This is the West talking to us from 2000 years ago.This is how a European culture excelled in brillaint technological amastery before the Industrial and Scientific Revolutions of the last few hundred years.

Through such rare survival of such material (and it was not recognised as a mechanism for years due to severe corrosion) we now know that the Ancient Greeks were far superior to how we once thought and had developed not only such amazing and complex feats of technology, but understood the complex movements of the cosmos.

Another example of the technological mastery of western civilisation.