The Poppy and the Prophet. 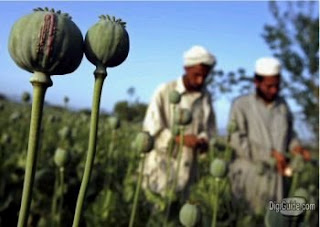 This is a poem about how the organic process of growing opium is similar to the process in which the Koran was created.

The seed grown by the farmer is similar to the book of the prophet.


The Poppy and the Prophet.

It began in the East with the vision of a prophet,
And a hungry peasant desiring easy profits.
One was born upon a sheet of paper,
The other sown upon an Afghan acre.
Both the pen and the plough inscribed,
In deliberate striations their many lines.
First planted in soil was a single seed,
As from a single letter arose the creed.
The fragile seedling began to sprout,
As the first word was written out.
Followed by pale flowers that grow,
The sentences then swiftly flowed.
The poppy pod then wept its tears,
As the verses began to appear.
The resin flows and is gathered up,
The chapters bound into a book.
Take the resin and make a powder,
Take the book and form a religion.
Smuggle the powder into the West,
Build there mosques and minarets.
Sell on streets the powder for pounds,
Build new faith schools in every town.
Buy with the profits bullets and bombs,
As extremist Imams preach sermons.
Turn our youth into passive Junkies,
Easy prey for the cells of Jihadists.
As the West dies from demographics,
We surrender daily to the Caliphate.
It began in the East with the vision of a prophet,
Whose words are perverted for wars and profits.

Labels: afghan heroin, the poppy and the prophet