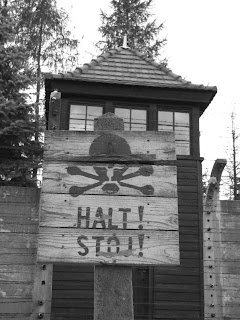 I have always despised Sylvia Plaths poem 'Daddy' as the self indulgent whining of a perverted soul.

Her generation were abused children who became abusing adults, they were forced to choke on the images of the Holocaust until they became suicidal self haters. Such a system of mental torture is a crime against humanity.

It is this crime that the liberal consensus is built upon, for its power is a product of inculcated middle class liberal guilt and shame.

In almost all poems and literature the State is described as a 'fascist father', yet this is anachronistic nonsense. The State now is a Nanny State, a medusa that turns us all to stone in the name of its latest fetish from anti-racism to green politics.

The state is a female, a monstrous creature that aborts its own children, the rights and liberties it is made from.

The female in poems is almost always described as gentle, but in reality the female is a cruel creature that aborts its own babies with nonchalence for the most trivial reason - from money to fashion.

Liberalism is a torture machine.

Mummy says YES, mummy says NO,
Mummy locks me in a cage,
When I don’t do as I am told,
Mummy tells me what is true,
Mummy tells me what is right,
Mummy is the hand that slaps,
And that rocks the cradle at night.
Mummy pops the silver skin of a packet,
And swallows an abortion pill,
She is the murderer that excretes,
My siblings into her red rags,
Then waves them for the workers,
Turning them into socialist flags.


Mummy is no fascist,
With an armband of red, white and black,
Mummy banned the swastika,
Only for our own good,
Mummy made us learn by rote,
In the playground of the wretched
The rules of political correctness,
With building blocks of cloth,
That spell out ‘ Believe, Obey, Consume’,
She emerged the victor of the Long March,
Now she wears the red star as the jewel,
Sparkling like a ruby in her crown.


Mummy was a hippie,
Who wore flowers in her hair,
And loved Marx in her heart,
With a poster of Stalin pinned upon a wall,
She sung the red flag at dinner parties,
And applauded the Great Terror,
As the gulags gorged on millions,
A white wind howled across the Steppes,
Frosting breath into frozen clots,
Until the spirit shivered free,
Into the warm embrace of death,
Blood soaked the Siberian tundra,
As a red tide rose in terrors flood,
Then ran into a valley of death,
Drowning the dawn itself.


Mummy is now a liberal,
Who wants rights for all,
Except those she defines as fascists,
And the enemies of the state,
Who must be butchered in the streets,
Like stray dogs in a cull,
Rounded up in pogroms and silenced,
Bound with rules and laws,
Their mouths filled with molten lead,
So that they may not speak,
Of what is happening,
On the other side of the wall.


Mummy dropped acid,
With The Brotherhood of Eternal Love,
But the only gate she ever opened,
Was into the Dachau of herself,
Walking with her sisters, Terror and Rout,
She choked on tear gas in Grosvenor Square,
It was the first time she cried,
Like a real human being,
Though not for her own children,
But the children of the enemy,
Who were busy shooting fascists,
In the back of the neck.

Mummy was dead before she was born,
Abandoned at the gates of Auschwitz,
She walked the world alone with ghosts,
Singing a song for Stalingrad,
She worshipped Warsaw but never wept for Gaza,
Her logic was illogical,
And hypocritical in the extreme,
A cell of abstract rights made a system,
She wired my soul with self loathing,
As a machine for her own thoughts,
Until nothing true remained of me,
And nothing true of her.


Mummy had shining eyes like searchlights,
Peering down from a guard tower,
We were trapped in the agony of her love,
Her arms were snarls of barbed wire,
That wrapped us all in a cruel embrace,
A lie that called itself compassion,
Yet killed everything she ever loved.
Mummy you became a monster,
Because you only ever saw the monster,
That lived inside of you,
So you became a Medusa,
Turning all your children into stone,
So that they may never speak,
Of what they had seen you do.


Mummy is the dark heart of winter,
The cycle that returns to its start,
As a wolf returns to sniff the corpse of its kill,
Mummy built for us her death camp,
And taught us to call it home.
Mummy is now the nanny state,
And each new law her spawn,
That binds our tongue with thorns,
Removing our rights and freedoms,
To ensure our fearful silence,
And shuddering submission,
Whilst suckling her many serpents,
She smiles whilst killing her young.

Poor Sylvia was mentally ill and took her own life. A very fragile weak neurotic woman who was very vulnerable to the zeitgeist she naturally reflected what the great and good leaders of the time told her was right.After all the mighty allied victors had just won a world war leaving a triumphent marxism in the east and its twin Franfurt school liberalism in the west .
Asking why, what ,where for whom is difficult and most people are not prepared to do that. Easier to follow the crowd , the consensus. Black and white is so much easier than shades of grey.