The Lion Of The Desert 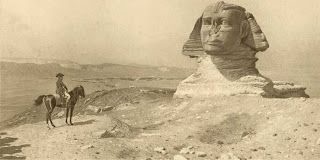 The Lion Of The Desert.


I am Abu al-hol, the Father of Terror,
The Great Barabi, the lion of the desert,
In a sea of shallow shifting sands I sit,
An island amidst the Egyptian waters,
Where waves of dune rise, ebb and drift,
Then in silence crash upon my stone flanks,
Whilst centuries drip to drown in time,
Choking on the froth and spume of dust,
Which rises as incense smoke from a censer,
From all four of the desolate directions.


Washed by dry tides of wind and storm,
Scoured by squalls of sand,
That scream and howl both day and night,
In dark fits of furious frenzy,
Then burnt by sun and froze by moon,
Whilst all the while I sleep uncaring.


During the day fleas with the faces of men,
Clamber aboard my broad stone back,
And chip away at my stone skin,
With chisels, picks and shovels,
Seeking to destroy my beauty for knowledge,
Whilst beneath silvern jambiya moons,
Thieves in masks dig tunnels into my rock,
As maggots eat into festering flesh,
Seeking my treasures hidden deep within.


For when the sun has set and all the fleas fled,
I awaken in the moonlight,
And gaze in constant guard the night sky,
Fending off misfortune from the stars,
Which as a serpent slides through space,
Forever winding its way to our world.


Behind my eyes I keep my secrets,
A chamber of the sun,
Where polished crystal lenses,
Collect the twin rays that enter within,
Directing the beams upon an altar,
That produces the fire of creation,
Within the catacombs of my stone.


Whilst higher still in my mind,
The garden of the brow Chakra awaits,
Where higher wisdom awes the initiate,
With visions of the soul and cosmos,
Within the form an aetheric astronomical body,
Etched in silver upon its limbs,
Are sigils of sacred origin,
Designed to inscribe themselves,
Upon the minds of the elect,
Who enter within this retort,
The ark of my eternity.


A secret door sits beneath my breast,
Barred and blocked by Roman rocks,
That as talons of stone grip the earth,
And deny entrance to my adepts,
Who are drawn to worship me,
The wise men and Emperors that bow before me,
And seek the keys of heaven,
So the world grows dark with ignorance,
And sickens with its sins.


One day I will awaken and roar to the sky,
Then unleashed shall be, that dread tide.

Yet I have walked through those stone walls,
In questing dream as would a ghost,
Sunk through the deep seas of sand,
And stepped forth into that cavern,
Steeped in sinister darkness,
Where rests the lost tomb of Menes,
The founder of Egypt, a Bard of Britain,
A Druid of frozen Thule and a son of Menw.

Along lost passages into an inner sanctum,
I walked the Baardic path,
Where walls in white crystal shone,
With stars of polished pearls,
And planetary spheres of polished gems,
Used in images of mystery and medicine,
To heal, kill and enlighten.

White marble tablets inlaid with gold runes,
Rest upon rows of stone sarcophagi,
Which can only be read,
Through the Third Eye Of Illumination,
Which opened and revealed,
The sacred text efflorescing as a flower,
Foretelling of a red star rising,
Thunder and lightning, a world awash
With walls of moving waters,
That will throw down the mountains,
And drown all those spiders of greed,
Whose sticky black webs enshroud the earth,
with threads of death and war,
And wash away all the sinners and their sins,
So that the world may be reborn anew,
And rise from the waters, green again.

The runes foretell an apocalypse,
Preceded by many signs,
A light in the night sky in Capricorn,
The circuits of Venus usurped,
The Blue Kachina of a man made machine
Dancing as a dying star in the plaza,
Tishya shaking the heavens,
A Golden Calf sold as Art in an auction,
Whilst the lightning flash of a death spiral
Mocks the jackals of the city,
Then the roaring of the Sphinx, Abu al-hol,
The Father of Terror in the desert,
Shall be heard, heralding the Age of Ragnarok.

"I am Abu al-hol, the Father of Terror,"

The difficulty with poetry is figuring out "the interpretation" or lesson to be learned. At least that's the case with me. Upon reading the above, my mind runs to terrorism as I know it. That being Islamic extremism. In other words, the Arabic speaker=the father of terrorism today. Not saying it's right or wrong. Just saying that with poetry, more so than any other type of literature, the reader can pick up a message unintended by the writer. Then again, maybe my interpretation is correct.

you are correct - at one level it is about Islam as a 'lion of the desert' that sleeps in the sands of centuries then awakens to Jihad, but it also about many other meanings that man projects upon the sphinx and how the sphinx itself defines its own meaning as the 'Lion Of The Desert' and the Father Of Terror.

The lines of the silver jambiya, an arab knife, relate to how the treasures of the past, such as the beauty in Islam, are plundered by thieves such as radical imams for their own political purposes.

The poem describes how an adept of the line of ancient mysteries can even today penetgrate its veils amd mysteries and seek deeper meanings from its secrets.

The links with the Druids is a reference to scientific thories of Proffessor Alexander Thom and Dr. Robert Lomas who believes that the Megalithic Yard was invented in the Orkney Islands in Maes Howe off Scotland by a Celtic priesthood as a sacred measurement and that this measurement was then transported across Europe into the East and was used as the basis of measurement of the Pyramids.

Type in 'Island Brain Behind the Pyramids' and a bbc NEWS REPORT WILL POP UP AS A LINK ON GOOGLE.

This is how I link Menw The Aged, the creator diety of the Druids, with the ancient Egyptians and also via the ancient mystery schools where Druids are known to have travelled into India and Egypt.

Today in order to enter the sphinx this has to be done in vision, as the secret gate into the sphinx is blocked by the 'roman rocks' which is based on the actual archeology that the front legs of the sphinx are roman additions and hide a secret door to inner chambers within the sphinx that have secret records of the future hidden in them.

The vision of the future that the adept gains is, ironically, the apocalypse happening right now.

The legend states that at the end of the world, the shinx will roar at the sky.

As someone interested in the ancient past and its mysteries I liked this poem very much.In fact, it probably portrays the Sphinx's true origins and nature more so than earlier poems and writings.

I believe that the secrets of the Sphix will probaly be revealed not by archaeology but through the inner mind, of the seer, the visionary, the poet as it is almost as if the Sphix itself is some kind of time capsule, some say that leads to the Ancient Halls Of Records left by the supposed Atlanteans, or precursors of the ancient Egyptians.

I personally did not get the immediate impression that the poem was to do with terrorism, Islamic or not (although on one level you may have meant that), and maybe this is modern 21st-century western man putting his own perspective on things.

Rather, I saw the terror as a truly global terror, of that from the skies and which would have invoked great terror in those peoples then and later. The terror of a cometary impact is very real and has occurred on earth in the apst, and within recorded history. The end of the pre-Egyptian civilsation may have led to the creattion of the Sphix asa reminder of that past - a truly comsic terrorist from the skies.

See Hancock's book THE MARS MYSTERY as one useful introduction to this enigma.

A great visionary poem that speaks from the past fot the future.