The Guardian and the Capitalists 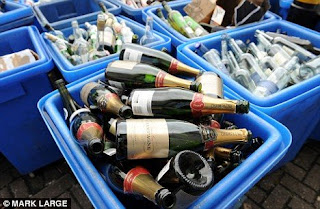 Image - champagne bottles outside the Birmingham Tory Conference, the sign of how the tories celebrate whilst our people suffer.


The banks are all broken, the markets red,
Prudence in her rags, has weeping fled,
Yet pigs still gorge before their troughs,
Gloating as the poorest bear the costs.

For every bottle the capitalists quaff,
Is another worker sacked or laid off,
So raise a full glass and give a cheer,
The credit crunch wont hit us here.

Whilst our families are cast onto the streets,
And children fed on the cheapest meats,
The rich grow ever richer from selling short,
Sucking our blood whilst sipping their port.

So knot the short rope and raise them high,
Let all tycoons and tyrants, choke and die,
The lice that fed from our nations flesh,
Must face Judgement, then be put to death.


Those that think there is a left and right in British politics are idiots. There is no longer a left and right, there is just the domination of the capitalists over politics through their control of political parties via the financial donations they make to those parties.

The excerpts from the Peter Oborne articles below detail how both the Labour and Tory party are run and controlled by the same cabal of capitalist idiots and criminals that created the present economic crisis.

Most interesting though is The Guardian.

Capitalism needs to control all those social and political forces that could become threats to its survival, so it has absorbed socialism and communism within itself and bought off both the Labour Party and the Guardian newspaper.

Both the Labour government and the Guardian newspaper now act as safety valves for the threat of socialism, the same as the Tories and UKIP do on the right, and they are used to control the masses.

Both right and left of British politics is controlled by the Capitalists under PARADIGM CONTROL.

THERE IS NOW ONLY CAPITALISM AND NATIONALISM - One is either a capitalist or one is a nationalist.

The old lie that fascism was a product of capitalism was demonstrated as bullshit when the capitalists of the UK and US smashed fascism in all its guises during the war. Fascism is now just a ghost, a figment of the imagination of the capitalist lackey writers of the capitalist media, that the politicians of the reactionary right and the socialist left use a boogeyman to scare ethnic minority groups and Jewish groups into obedience to their demands.

As long as the Jewish populations of our nations and the ethnic minority groups can be frightened with stories of 'fascism rising' in the newspapers, such as we have seen this week with the Austrian elections, they can be herded like sheep into the political ghettoes the capitalists want them to stay within.

The media call all NATIONALIST parties and movements as fascists as NATIONALISM is the one political movement and ideology the capitalists do not own.

Ever wondered why the media never deploy undercover journalists to infiltrate and undertake investigations into the Socialist Workers Part, UKIP, The English Democrats Party, Respect or the Left List or Workers Power or Anti-Fascist Action ?

Its because each of those groups are owned by the system - they serve the systems interests.

This is because the BNP is the ONLY opposition party in the country.

It is the only party not bought and owned by capitalism.

Therefore it has to be attacked, villified, abused and smeared by the media and its fat golbin gobshite mouthpeices like John Gaunt and the rest of the mewling pitiful slaves of the system that are used to smear the BNP, such as Peter Hitchens and Richard Littlejohn, Gerry Gable and Nick Lowes.

They are all whores, bought and owned by the capitalist system.

The far left fools like those on Lancaster Unity will not ever admit that they are part of the capitalist system even when the evidence is 100 % clear and incontrovertible, as stated below about the chairman of The Guardian Paul Myners.

Instead they will continue to act as the flag wavers for socialism whilst being in the pay of the capitalists.

The capitalist whore masters of the far left like the idiots that run the SWP, AFA and Lancaster Unity are nothing but the betrayers of socialism.

They make their money by mocking the dead who believed in socialism and who fell for socialism in the 20th century.

THE ONLY REVOLUTION IS NATIONALISM.

THE ONLY STRUGGLE IS NATIONALISM.

THE ONLY VICTORY WILL BE NATIONALISM !

Take for example the shocking case of Paul Myners, chairman of the impeccably Left-wing Guardian newspaper.

He is one of Gordon Brown's biggest cronies, he paid £12,700 towards his leadership campaign and has carried out two reviews of City culture on behalf of the Prime Minister.

He is now charged with a major review of pensions and is also chairman of the Low Pay Commission.

Myners is also a director of GLG, the hedge fund with the biggest short position of all in Bradford & Bingley. GLG can look forward to giant profits, having sold short tens of millions of shares in the troubled company.

For example, Sue Nye, the ‘gatekeeper’ to Downing Street, is married to the economist Gavyn Davies, who made tens of millions of pounds as a partner of the troubled investment banking concern Goldman Sachs, and is still said to be a close friend of the Prime Minister.

Earlier this year, Jennifer Moses, a managing director of Goldman Sachs — and so rich that she did not even notice when her secretary, the exotically named Joyti De
Laurey, stole £1.2 million from her bank account — was invited to work as a senior No 10 adviser.

Jeremy Heywood is another very worrying case in point. He was hired from a senior role at Morgan Stanley — reportedly this weekend in negotiations for a distress sale to a Chinese fund — to take a highly sensitive and senior job as Downing
Street Permanent Secretary.

Incidentally, Dennis Stevenson, chairman of the doomed HBOS bank, played an important role in introducing Blair to the City — while the buy-out expert Sir Ronald Cohen grew disturbingly close to Gordon Brown when he was Chancellor.
It is no coincidence that Blair’s chief of staff Jonathan Powell (I last spotted him eating lunch at a £150-a-head London restaurant with a partner from the leveraged buy-out firm Kohlberg Kravis Roberts) now works for Morgan Stanley.

hahahaha,
touch a nerve did i you sad red losers,

now scuttle back to your capitalist paymasters that fund the LABOUR PARTY AND THE GUARDIAN and keep doing as the establishment want.