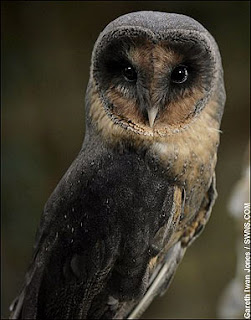 
Strangers abroad beware the black owl,
The sinister spirit of England’s wildwoods,
Lord of the Night crowned with a full moon,
Whose wings span the worlds as guide,
For souls who walk the narrow bridge of death,
Towards the realm of rest and rebirth.


Seer of the soul who sees all at midnight,
And delves the dark depths of its wisdom,
Whose ghost feathers are illusions,
Sheathing a secret of man skin and bone,
Who sits upon a mound of fresh turned dirt,
Conversing in silence with the dead below.


A totem bird of burnished obsidian,
A fetish of feathers feted by the wind,
Who sweeps the night upon sable pinions,
Hissing with spite as it hunts for lost souls,
Then haunts a juju house of hollowed yew,
Lightning struck and fire burnt.


One night I chanced upon a Parliament,
Whose stare met within a stone circle,
A round table of Knights, guardians of Albion,
Their shrieks and whistles a Druid tongue,
Spoke of the stars and the end of time,
Merlin of the Nemeton, master in their midst.


Fearful as a vole of those black talons,
Razor tipped as spears with sudden death,
I spied in silence whilst those wizards met,
As pagan mists of ill omen drifted,
My heart fluttered as a trapped sparrow,
Within the bone barrel of my chest.


Then swift as thought one sought to strike,
Swooping down from darkness, talons splayed,
Threw eight black blades into my face,
Unsheathed to rake and blind, cut and slice,
Drew back from the kill only as I arose,
Realising it had mistaken my fear for prey.


Yet three of those talons had made their mark,
And cut three scars upon my pale brow,
From which a single drop of blood arose,
As red as the temper of Taranis it bloomed,
And sat as a tilak seed upon the seat of my soul,
Opening a doorway to the Otherworld.


In a dream that black owl came drifting back,
As an outlaw arising from my subconscious,
With blazing lantern eyes of ruby afire,
Wise Merlin from Anwnn with a secret to tell,
Sat upon a bedpost whispering in my ear,
And left upon my pillow an ebony feather,

I awoke with a prophecy within my mind,
Given by that wanderer from the shadow side ;
When a black fox and black owl haunt the land,
And the sons of England die in desert sands,
Whilst traitors wage war within our borders,
Then Herne the Hunter will return, sword in hand.

Posted by Defender of Liberty at 07:51

Another shamanistic poem that brings to light the complexities of the Other World and Other Beins to light, of totem animals, and prophecy.

The accidentaol assault by the Owl turns into on event where the victim undergoes a journey to the OtherWorld, of the shaman and the magician.

And of cours the old burial mound, or barrow/tumulus, mentioned in the poem is the haunt of the dead and the ancestors. Again, it is the transitional boundary between the Dead and the Living, where the faery beings, or entities of ther OtherWorld, inhabit.

The owl too, with its large eyes, too, has often occured in UFo literature as a sort of screen memory, representing the entities that today we would term "extraterrestrial alien" with their large eyes. The owl ina sense is that transitional creature that we project onto any experiences with the entities of the OtherWorld.