The Flick Switch Generation and The Wicker Man 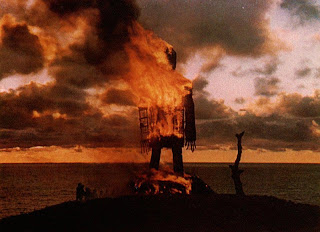 The mission to create a totally self-regulating market economy is predicated on the assumption that both the human beings and natural environment are turned into pure commodities, that is, they are freely bought and sold.


Polanyi emphatically underlined that a completely self-regulating market, which was fully disembedded from the society was nothing but a chimera. It could not be realized in reality.

In his own words, “Our thesis is that the idea of a self-adjusting market implied a stark utopia. Such an institution could not exist for any length of time without annihilating the human and natural substance of society; it would have physically destroyed man and transformed his surroundings into a wilderness. Inevitably, society took measures to protect itself, but whatever measures it took impaired the self-regulation of the market, disorganized industrial life, and thus engendered society in yet another way. It was this dilemma which forced the development of the market system into a definite groove and finally disrupted the social organization based upon it.”


The Second Great Depression that has begun is the sloughing of an age.

As the death rattle of the capitalist relic of the cheap oil boom of the 20th Century topples into the tar fields of fossilisation, finally we are forced to evolve as a society, as a nation and as a civilisation.

The Petro-Dollar Recycling System and the Proportional Reserve Banking System of perpetual expanding debt built upon it is dead.

The Second Great Depression is the shadow of Peak Oil, casting its darkness right before we plummet over the edge of it.

The old ideologies are all dead buried, from Consumerism to Communism, Fascism to Capitalism they all lay mouldering in their graves of history.

They have done their job in taking us to the brink, now we must plunge over into the abyss if we are to rise again.

To seek to sustain or perpetuate the present system and its structures and mechanisms, is seek to resurrect a corpse.

The system is dead, and even if it were somehow enabled to live a little longer, it would be merely to delay the inevitable.

A new ideology awakens, that of Environmental Nationalism.

The new nationalism that will arise to replace the archaic political totems and economic fetishes of the present order must be a system that is evolutionary and organic.

It must set itself the goal of a revolutionary national renewal that seeks to place the laws of the natural order at its heart, rather than the ideological idiocy of the Liberal Consensus, Political Correctness, Free Market Capitalism, Consumerism, Liberalism etc etc and the rest of the living dead.

The decision of the US and UK governments to try and spend their way out of this crisis by printing more fake money based on increasing public debt that will merely increase inflation, is an act of utter folly.

The First Law of Economics is that ' You cannot Borrow your way out of debt '.

The old order is dead, and with it the economic mis-management systems that were built upon it.

The billions the British government have spent under the clod Brown, should be spent on two things ;

The money we spent would then have been recouped within less than five years from the savings in the exports of our national currency reserves to foreign oil and gas producing nations eg Russia and Saudi Arabia.

Instead the clod Brown decided to throw good money after bad into the pit of the banking system.

He only did this as the Labour Party is financed and controlled by the bankers and the hedge funds that subsidies its existence.

The Labour Party know that if the money from the hedge fund traders were also not going into the coffers of the Conservative Party, it would collapse from its own debts overnight. That would leave the BNP to replace the Tory Party.

The establishment has no choice but to subsidise the same criminals that subsidise it.

Today you can hear the pigs squealing.

The pig bankers and the pig politicians that created this crisis know that the trough is almost empty.

Feeding time is almost over, now comes the slaughterman to turn the pigs into pork.

We have become complacent in the West.

Somatised and tranquilised upon the bibulous meniscus of the economic expansion of the Cheap Oil Era, we were like the smack head junkies that haunt our streets.

We thought the party would never come to end, that the oil would always flow cheap and thick and credit would always be available when we wanted it.

Thatcherism was simply based on the money from North Sea Oil - there never was a Thatcher economic miracle. All she did was squander the money made from oil on subsidising the bankers who created this crisis.

Under Thatcherism we wasted all that money that should have been spent on building an alternative energy system and an industrial base built upon those energy systems.

Now are running out of North Sea oil and are dependent on foreign energy to keep our lights on.

The same economic system has been sustained by Blair and Brown. They are all as guilty as each other. The Old boss is the same as the New boss.

What we have defined as 'status' and 'wealth' in our degenerate society as a result of the last three decades of treason, is nothing more than the Mark Of Cain, for the rich have grown rich stealing the future from their grandchildren.

Didnt any of them think that one day someone would have pay the bill ?

In less than two generations we have gone from a nation that was able to feed itself, supply all of its own energy needs, fight as an independent army and control its own borders to a nation where we import nearly half our own food from abroad, are a net importer of energy, are unable to sustain a war on two fronts either abroad or at home and where we have lost control of our own borders to the point where we no longer know how many people are even in the country.

In the historical blink of an eye this is where Consumerism, socialism and capitalism have led us.

I say throw the whole damn lot into the Wicker Man along with all of its technicians, acolytes and lickspittles.

This winter the lights will start to go out as the power stations are unable to supply all the electricity people require.

Old people will die of hypothermia in their thousands, in the annual cull of capitalism where the weak, the poor and the old are allowed to freeze to death whilst empty office blocks are heated to tropical conditions to keep the pot plants alive.

The masses will be watching EastEnders or Coronation Street and then everything will go black.

They will sit in shock for a while, then anger and then finally fear.

They will struggle to remember where they kep the candles. They will look for old woolen jumpers that have been kept in the back of the wardrobe for years. They will huddle around blankets in chimneyless luxury apartments turning blue.

The Flick Switchers will struggle hardest to cope.

They are those who have been raised from birth in the 'Flick Switch Society' where they have grown used to having what they want, when they want it at the flick of a switch - from fame, cheap credit to electricity. They will suffer the most.

That mewling pathetic spawn of Consumerism, the TV babies, will finally awaken to the real world.

But the primary victim of all this will be the Liberal Consensus and the Liberal Society itself.

Both of those artefacts of the past will be buried in this earthquake.

An age of living with the limits of the Natural Order, an age of National Liberty and the dawn of an national environmental revolution.

Posted by Defender of Liberty at 07:34